So of course I had to write about yoga: for Mint Lounge

Home/Columns, HT Media, Mint Lounge, Spirituality/So of course I had to write about yoga: for Mint Lounge
Previous Next

So of course I had to write about yoga: for Mint Lounge

Actually, my editor suggested that I write about yoga on yoga day.

It is here and below 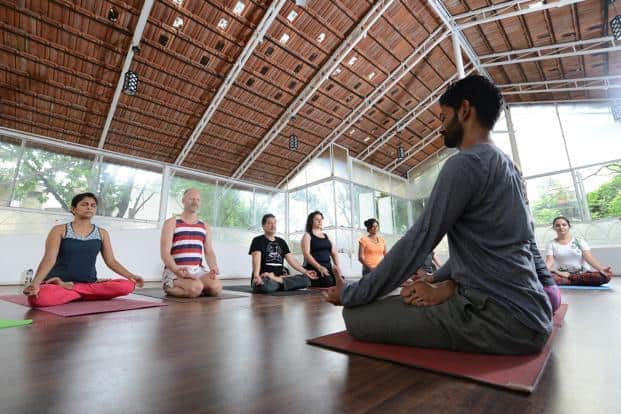 It is a little disconcerting, but ask yourself this question: what unites India?
I have tried asking this question in various forums. It is hard to agree on three or four things that form the value system of this country. It cannot be religion because we are secular. It cannot be language because that changes every few hundred kilometres. It cannot be clothing style because even that varies from region to region. We listen to different music in the north and in the south. We observe different festivals and we pray to different gods. We have no national paper and listen to radio or television in our own regional language. Sure, English is the lingua franca, but the number of people it touches is relatively small.
My submission—and I know that this sounds shallow—is that there are three things that unite India: Bollywood, cricket and spicy food. Can we add yoga to this list?
If you look back on your childhood, most of us grew up with yoga. We either did it at schools; or watched our relatives do it; or were taught it by parents and grandparents. Yoga, like the cawing of crows and the hiss of the pressure cooker, is part of the drumbeat of an Indian childhood. We took it for granted. That may be changing.
Yoga has now been co-opted by the West. There are computer tablets called Yoga; there is Yogi tea that promotes calmness; and there is a yoga butt that we all aspire to. Yoga has come a long way from the pithy instructions compiled by Patanjali in 196 sutras, or short verses. The yoga sutras of Patanjali form the foundation of many schools of yoga. Their beauty is in their brevity.
Consider one verse: Sthiram Sukham Asanam. The concept ofsthiram has made its way into many Indian languages. My grandmother used it in Malayalam; and my grandfather used it in Tamil. It meant repose, stability, relaxation, sitting in one place without moving. Roy Baumeister makes the same claim in his book,Willpower. In it, he says that holding your posture without moving enhances willpower. Indian yogis knew that in 400 CE.
The big news, of course, is that Prime Minister Narendra Modi has urged the world to adopt 21 June as the International Day of Yoga. The ministry of external affairs’ website lists a number of countries, including Australia, Norway, Spain, Seychelles and Vietnam, which are hosting mega-events to mark this first International Day of Yoga. If it works, it would be a great thing because it would be a way for India to claim—or reclaim—a practice that has now become a global juggernaut.
Many Americans practise yoga without so much as a nod to its country of origin. There is Christian yoga, power yoga, energy yoga and aerobic yoga. All are misnomers. All go against the fundamental tenets of yoga as a spiritual, healing practice that promotes balance and mental stability.
The goal of yoga, or at least the intended goal of yoga, was equanimity or samatvam. It was moderation. It was balance. It was achieving a higher mental state. Yoga used the physical to get to the sublime. The way it is practised now, most people have ignored the sublime and reduced yoga to a mere weight-loss practice. That does this deep and profound spiritual practice a grave injustice.

It is time for India to take ownership of its gift to the world. It is time for India to embrace the practice that has now been adopted by people far from its shores. It is time for us to get our “Om” back.
Easy to say; hard to do.
Sure, we want to take yoga back. But what should its path be in India? Should it go back to its origins? To its first principles? To the yoga sutras? But they are unabashedly Hindu in origin. How do we square that with a secular country? Should we make yoga secular? Should we strip yoga of its Hindu tenets and revamp it to reflect the Christian, Muslim, Sikh, Jain, Parsi and Jewish citizens of India? How do we do this?
My view, and I know that this may not be a popular view, is that yoga has to become pure. Its practitioners have to accept and reflect the fact that it is Hindu in origin. This is not a bad thing. Just as it would be almost impossible to enjoy Sufi music without acknowledging its Islamic heritage, it would be impossible to fold yoga into India’s fabric without linking it to the yoga sutras—which were its starting point anyway.
The role of Sanskrit in yoga has to be acknowledged. The fact that yoga is more about lifestyle and less about exercise has to be emphasized, particularly to global practitioners. The philosophical tenets of yoga have to be brought out. They cannot simply be whitewashed away. Most important of all, Indians have to take pride in yoga. Like nature, yoga broadens the mind. It takes the scientific approach to inquiry of the mind-body system. It does not exclude people based on “narrow domestic walls”, to quote Rabindranath Tagore.
To practise yoga without understanding its Hindu origins would be like stripping Bordeaux wine of its French terroir. You may get the formula right but you will lose its soul.
Shoba Narayan2020-06-23T10:18:45+05:30