Thank you, Preeti Zachariah for writing the kind of article that authors dream about.

Hindu Metro Plus Chennai.  Read it here or here or in the PDF here 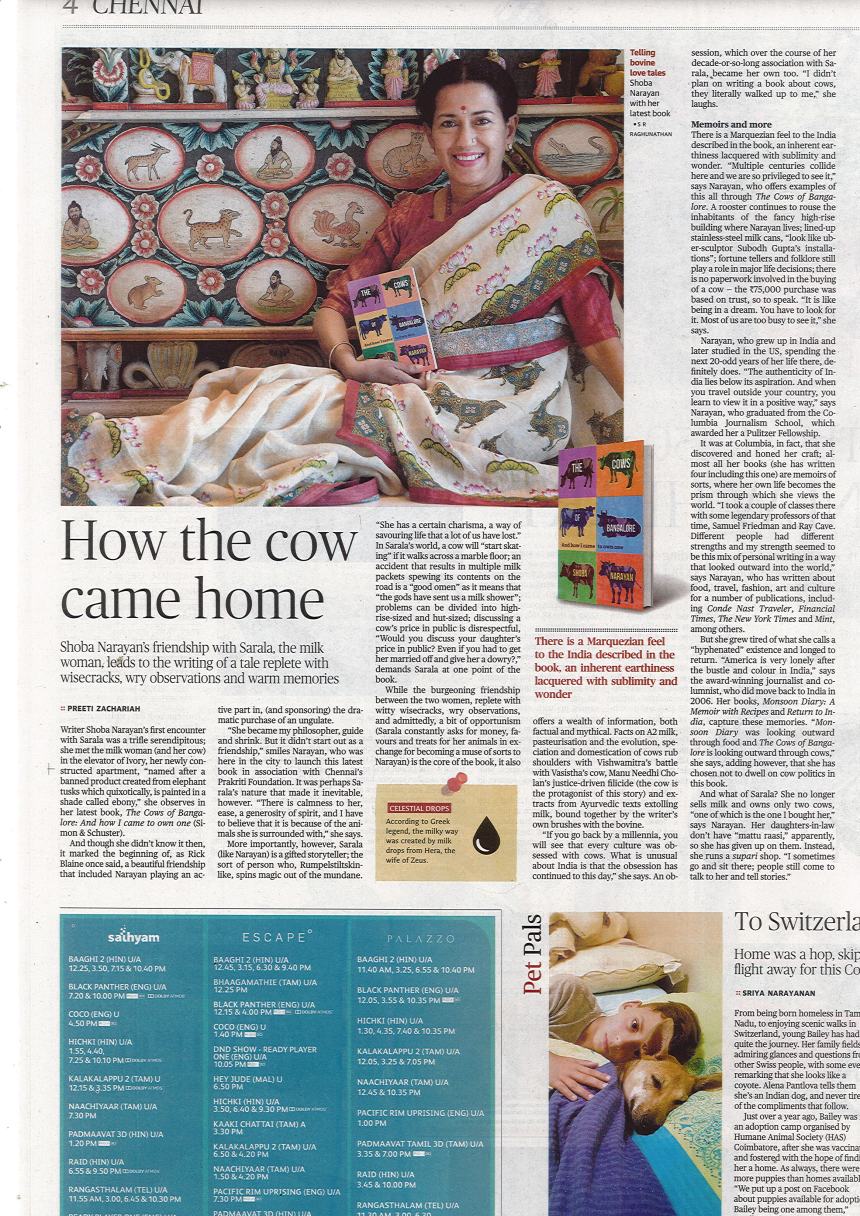 How the cow came home 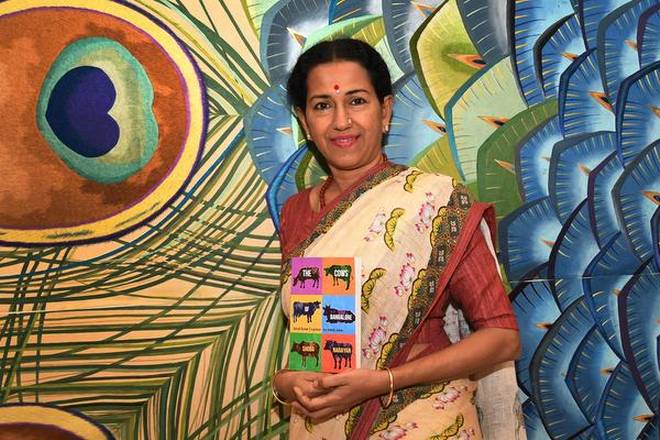 Shoba Narayan’s friendship with Sarala, the milk woman, leads to the writing of a tale replete with wisecracks, wry observations and warm memories

Writer Shoba Narayan’s first encounter with Sarala was a trifle serendipitous; she met the milk woman (and her cow) in the elevator of Ivory, her newly constructed apartment, “named after a banned product created from elephant tusks which quixotically, is painted in a shade called ebony,” she observes in her latest book, The Cows of Bangalore: And how I came to own one (Simon & Schuster).

And though she didn’t know it then, it marked the beginning of, as Rick Blaine once said, a beautiful friendship that included Narayan playing an active part in, (and sponsoring) the dramatic purchase of an ungulate.

“She became my philosopher, guide and shrink. But it didn’t start out as a friendship,” smiles Narayan, who was here in the city to launch this latest book in association with Chennai’s Prakriti Foundation. It was perhaps Sarala’s nature that made it inevitable, however. “There is calmness to her, ease, a generosity of spirit, and I have to believe that it is because of the animals she is surrounded with,” she says.

More importantly, however, Sarala (like Narayan) is a gifted storyteller; the sort of person who, Rumpelstiltskin-like, spins magic out of the mundane. “She has a certain charisma, a way of savouring life that a lot of us have lost.” In Sarala’s world, a cow will “start skating” if it walks across a marble floor; an accident that results in multiple milk packets spewing its contents on the road is a “good omen” as it means that “the gods have sent us a milk shower”; problems can be divided into high-rise-sized and hut-sized; discussing a cow’s price in public is disrespectful, “Would you discuss your daughter’s price in public? Even if you had to get her married off and give her a dowry?,” demands Sarala at one point of the book.

While the burgeoning friendship between the two women, replete with witty wisecracks, wry observations, and admittedly, a bit of opportunism (Sarala constantly asks for money, favours and treats for her animals in exchange for becoming a muse of sorts to Narayan) is the core of the book, it also offers a wealth of information, both factual and mythical. Facts on A2 milk, pasteurisation and the evolution, speciation and domestication of cows rub shoulders with Vishwamitra’s battle with Vasistha’s cow, Manu Needhi Cholan’s justice-driven filicide (the cow is the protagonist of this story) and extracts from Ayurvedic texts extolling milk, bound together by the writer’s own brushes with the bovine.

“If you go back by a millennia, you will see that every culture was obsessed with cows. What is unusual about India is that the obsession has continued to this day,” she says. An obsession, which over the course of her decade-or-so-long association with Sarala, became her own too. “I didn’t plan on writing a book about cows, they literally walked up to me,” she laughs. There is a Marquezian feel to the India described in the book, an inherent earthiness lacquered with sublimity and wonder. “Multiple centuries collide here and we are so privileged to see it,” says Narayan, who offers examples of this all through The Cows of Bangalore . A rooster continues to rouse the inhabitants of the fancy high-rise building where Narayan lives; lined-up stainless-steel milk cans, “look like uber-sculptor Subodh Gupta’s installations”; fortune tellers and folklore still play a role in major life decisions; there is no paperwork involved in the buying of a cow — the Rs. 75,000 purchase was based on trust, so to speak. “It is like being in a dream. You have to look for it. Most of us are too busy to see it,” she says.

Narayan, who grew up in India and later studied in the US, spending the next 20-odd years of her life there, definitely does. “The authenticity of India lies below its aspiration. And when you travel outside your country, you learn to view it in a positive way,” says Narayan, who graduated from the Columbia Journalism School, which awarded her a Pulitzer Fellowship.

It was at Columbia, in fact, that she discovered and honed her craft; almost all her books (she has written four including this one) are memoirs of sorts, where her own life becomes the prism through which she views the world. “I took a couple of classes there with some legendary professors of that time, Samuel Friedman and Ray Cave. Different people had different strengths and my strength seemed to be this mix of personal writing in a way that looked outward into the world,” says Narayan, who has written about food, travel, fashion, art and culture for a number of publications, including Conde Nast Traveler , Financial Times , The New York Times and Mint , among others.

But she grew tired of what she calls a “hyphenated” existence and longed to return. “America is very lonely after the bustle and colour in India,” says the award-winning journalist and columnist, who did move back to India in 2006. Her books, Monsoon Diary: A Memoir with Recipes and Return to India , capture these memories. “ Monsoon Diary was looking outward through food and The Cows of Bangalore is looking outward through cows,” she says, adding however, that she has chosen not to dwell on cow politics in this book.

And what of Sarala? She no longer sells milk and owns only two cows, “one of which is the one I bought her,” says Narayan. Her daughters-in-law don’t have “mattu raasi,” apparently, so she has given up on them. Instead, she runs a supari shop. “I sometimes go and sit there; people still come to talk to her and tell stories.”

There is a Marquezian feel to the India described in the book, an inherent earthiness lacquered with sublimity and wonder

According to Greek legend, the milky way was created by milk drops from Hera, the wife of Zeus.