Why does Mumbai inspire so much activism, writing, and imagination?

Urbs Primus in Indus: the enduring appeal of Mumbai, India 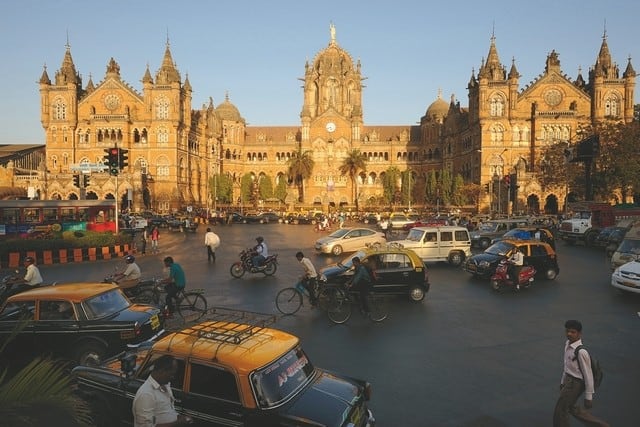 The best way to enter Mumbai is through its battered black-and-yellow taxis. If you’re lucky, you’ll happen upon a chatty taxi driver who will apprise you of the goings-on in this most populous and wealthiest of Indian cities: the cricketer Sachin Tendulkar’s retirement; the Bollywood star Shah Rukh Khan’s third child; the industrialist Mukesh Ambani’s son. India’s edgiest art galleries and theatres are here, as is the second surviving original copy of Dante’s Divine Comedy – under wraps in the Asiatic Library. Mumbai is a city of superlatives that well fits its “Maximum City” moniker, as coined by the author Suketu Mehta. The city has nurtured India’s best-known author, Salman Rushdie; its best orchestra conductor, Zubin Mehta; and the late, great lead singer of Queen – Freddie Mercury, aka Farrokh Balsara, a Parsee boy whose parents were from Mumbai.

I visit Mumbai often. It nearly always overwhelms me. The numbers are mind-boggling: 20 million people contributing 6 per cent of India’s GDP, 33 per cent of its income-tax collections, and 60 per cent of its customs-duty collections. Delhi may be India’s capital and seat of power, but the money that makes the Indian economy churn comes from this slim island that has spread its tentacles deep into the Arabian Sea.

In 1996, the city then known as Bombay divested its colonial but beloved name to revert to Mumbai. Locals use both interchangeably. I like the name Bombay, even though I believe that the name change was a necessary step in India’s emergence from the chrysalis of ­colonialism.

“Bombay is incredibly accommodating towards immigrants,” says Abhay Sardesai, the editor of Art India, as he walks me through the art galleries of Colaba. “It allows individuals to drop anchor and flourish on their own terms.”

“Half the Indians on the Forbes billionaires list live in Bombay,” says a dour cab driver named Shinde. I could have predicted what followed. “You’d think they’d want to do something about the garbage.”

Nearly every Mumbaikar I know has a love-hate relationship with the city. They complain about it constantly, but cannot bear to leave. Naresh Fernandes, the author of City Adrift: A Short Biography of Bombay, is no different. He loathes the housing societies of Malabar Hill that allow only vegetarian residents; bemoans the rising inequality, which he says is so unlike the city of “shared spaces” that he grew up in. But he cannot bear to give up on it. “I have a stake in this city,” he says. “Bombay used to represent a certain egalitarianism, you know. This was the place where you could come and make your fortune.”

From the time it was discovered by Koli fisherfolk who rowed on Arab dhow boats towards Heptanesia or the City of Seven Isles in 1138 and named it after their patron goddess Mumba Devi, Mumbai attracted prospectors, bounty hunters and traders with a nose for opportunity and a stomach for risk. Arab spice traders called one of the islands Al Omani, later corrupted into Old Woman’s Island by the British. The Zoroastrians, or Parsees, originally from Iran, escaped persecution by seeking its shores. When the Englishman Gerald Aungier became Bombay’s governor, he invited Goan Catholics, Bohra Muslims and the Marwari and Sindhi traders to come and grow his city. Mumbai is a city of immigrants – earlier, from foreign shores and, more recently, from other parts of north India. A plaque on the Gateway of India describes its status – both perceived and felt – perfectly: “Urbs Primus in Indus.” The primary city in India.

The city’s geography dictated its history. Its location at the western edge of India, its naturally deep harbour – Bom Bahia, or “beautiful harbour”, as the Portuguese called it – and its narrow width that forced people to live literally on top of each other, have influenced its destiny. The Chinese call this feng shui; the Indians call it vastu shastra. Mumbai’s vastu, its kismet if you will, has to do with maal – goods and their trading, previously textiles; today, pretty much anything money can buy.

There are numerous hotels for tourists to drop anchor into. The Four Seasons, located near the Worli Sea Link, has small rooms but superb service. The flagship hotel of the Taj group – the Taj Mahal Palace – was founded here near the Gateway of India, where the British entered and left India. It was bombed during the 2008 attacks on the city, killing the hotel’s general manager and numerous guests. Today, the renovated hotel welcomes guests once more, albeit after numerous security checks. The Oberoi group, too, has a couple of properties here in Nariman Point, the financial district. Boutique hotels such as Abode, Le Sutra and Bentley also thrive in the hip neighbourhoods of Bandra and Pali Hill.

“Even though the centre of gravity, at least in terms of ­real-estate prices, has moved north, towards Bandra and Khar, south Mumbai still remains vibrant,” says Arvind Sethi, a twice-returned local. South Mumbai is where the ­National Centre for the Performing Arts hosts visiting orchestras; where the Asia Society invites speakers; and where the Kala Ghoda Arts Festival and Literature Live ­occur.

The big change in Mumbai, however, is the flourishing of an “indie culture” in Bandra, Khar and beyond, according to Nayantara Kilachand, the founder of Mumbai Boss, a vibrant website dedicated to local news, views and events. “You’ll find cafes and salons often doubling up as viewing spaces, gigs taking place in offbeat venues and stores that are multipurpose – they’ll host a food market one day and a jazz performance the next,” she says.

Some things, however, remain unchanged. The crowded local trains; the entrepreneurial culture; the 5,000 dabbawallahs who deliver about 200,000 hot packed lunches – come mucky monsoon or stifling summer heat – from homes in the suburbs to office workers in the city. Studied by Harvard Business School, feted by Prince Charles who invited them to his second wedding, the dabbawallahs work perfectly in Mumbai, with its narrow, north-south topography, somewhat akin to Manhattan. Delhi, in comparison, is too spread out. “As long as people are hungry and enjoy their mothers’ cooking, we will be in business,” says one wizened dabbawallah named Telekar, who is eating his own lunch on a train after delivering 300 other meals.

“Why aren’t people depressed in a city like Bombay?” muses the New York transplant Asha Ranganathan, who has instructed her driver to meet her at Churchgate station while she took the “Dadar Fast” (the city’s most popular and populous local train) into town one day. “This city is full of stress. But for Mumbaikars, train rides are like group therapy. We Indians don’t hesitate in saying what is wrong with our lives. We don’t say everything’s fine like the Americans when our lives suck. We ride the trains and share our woes.”

I think of this as I enter Chowpatty Beach with Vijaya Pastala, who sells monofloral honey to luxury hotels and boutiques through her company, Under the Mango Tree. A third generation Mumbaikar with a farm in Alibaug, Pastala meets me for a sunset drink at the pricey Dome lounge atop the ­InterContinental hotel. Then we drive to Chowpatty Beach, where families have gathered for “hawa-khana” (to eat the air). Egalitarian Mumbai is very much in evidence on the beach, as well as in the Wankhede Stadium, where I watch a cricket match with Anand Merchant, a dentist who tends to the rich and famous. One of Merchant’s clients has given him US$150 (Dh551) tickets. “I don’t know what to do,” says Merchant about his bounty of box seats. “I mean, should I stop charging him for teeth cleaning?”

I treat Merchant to dinner at the famous Indigo cafe as a thank you. I invite him to visit Bangalore, my hometown. He demurs. Don’t the bars close in Bangalore at 11.30pm or some such ridiculously early hour, he asked? I nod. “Your city is a morgue, yaar,” he says. “Here, I can party all night and go to Zaffran’s at 4am if I am hungry. What would I do in Bangalore?”

Mumbai too is grappling with many of the problems facing global cities today: astronomical affluence surrounded by abject poverty; a bigger divide among the classes; political tensions wrought by immigrants, between “us” and “them”. The famous Dharavi slum is in the throes of “redevelopment”, a defective strategy according to the urbanologist Matias Echanove. “Bombay should develop incrementally with infrastructure ­retrofitting – like Tokyo has for decades. The government should realise that Dharavi is the solution not the problem.”

Mumbai’s saving grace is its practicality. Its people are not given to hyperbole, unless they’re getting paid for it. A typical Mumbai greeting is “Bol” – literally “talk”. Why waste time with niceties? “Yaar” means friend, but is used universally. “Mamu” or uncle is used both in affection and scorn. In spite of all its contradictions – its ­Parsees-only housing colonies and vegetarian buildings – Mumbai is India’s most cosmopolitan city. It balances the illusion of Bollywood with the gritty realities of its slums; it’s India’s most aspirational city, whetting the appetite of countless workers who commute using the celebrated Mumbai trains. Its people are both irreverent and welcoming, embracing newcomers into the collective fold with gruff practicality. Mumbai contains, as Walt Whitman would say, “multitudes”. It is indeed, Urbs Primus in Indus.

The flight Etihad (www.etihad.com) flies direct from Abu Dhabi to Mumbai from Dh1,045 return, including taxes.