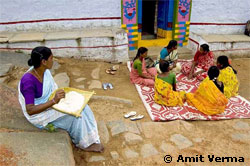 The ink-stained polls of the world’s largest democracy have delivered their verdict and India waits with bated breath to learn whether Prime Minister Manmohan Singh’s second administration will be different than the first. While India exults after yet another peacefully concluded election, one question remains: What is the role of women in Indian politics? The answer is both big and small. Typical of India, it contains contradictions.

On the one hand, India falls in the lowest quartile with respect to the number of women in parliament (9.1%). Even the UAE, with 22.5%, has more women representatives, according to the UN’s 2008 survey of women in politics. That said, the recently concluded 15th Lok Sabha elections have delivered a record 59 women as members of Parliament, the highest since independence, raising their parliamentary participation to 10.9%. Seventeen of these women are under 40. And representation of women leaders at the grassroots level in India is nearly 50%, especially since the passing of the 73rd amendment in 1992, which allotted one-third of all seats to women. The panchayati raj, that bedrock of rural government, has fostered more and more women participants and leaders. (A panchayat is a five-person elected village council.) Some states, like Karnataka, had inducted women into rural politics even before it was mandated by the constitution. Several states, including Madhya Pradesh, Himachal Pradesh, Bihar and most recently, Uttarkhand, have allotted not just the required 33% of panchayat seats for women but increased it to 50%.

The rise of Indian women as panchayat leaders is a spectacular achievement given that India has one of the worst records with respect to the way it treats the female sex. Malnourished, suppressed, uneducated, violated and discriminated against, Indian women have the odds stacked against them. Even birth is a hurdle, thanks to widespread female infanticide in rural areas. But for every Saroja who will be married at 13 because her mother, a devadasi (prostitute) in Chikanahalli Village, Karnataka, cannot afford to pay a dowry, there is a Lakshmi, who is serving her second-term as the panchayat leader of Kadinamala village in Kotagiri district. There is a Kenchamma of Nereleke gram panchayat in rural Karnataka, who survived life threats during her two terms as council leader. An illiterate Dalit, Kenchamma could not read or write. Perhaps as a result of her personal travails, she made sure that she brought education to all the children in her village, including a disabled child.

Talking to these women is a lesson in humility. Instead of the outrage and anger that urban feminists project, these women panchayat leaders speak with clear-minded realism about opportunities and costs. For many women, attending a panchayat meeting means sacrificing a day’s wage. It means assuming leadership for the first time in their lives and then subsuming it at home to serve in-laws and husband. For Kenchamma, it meant leaving her one-year-old son to other caregivers while she learned the ropes of politics.

Ask these women about political reform, and their answers reflect concerns that every women and mother can relate to. They focus on three things: healthcare, education, and the funds to make these two things happen. Kenchamma, a trained midwife, established health camps to improve awareness among the villagers. She also knew from personal experience that, often, it is the mothers who neglect their health the most. Simplistic as it seems, solving health and education is a common thread among panchayat leaders, whether they are men or women. The third concern is figuring out how to save or raise enough money to accomplish their goals.

Most villagers — in India and across the world — either don’t go to banks or don’t have access to them. Instead, they borrow from each other, buy jewelry and save in what Melinda Gates calls, “risky and inefficient ways” in a recent piece she wrote in Newsweek. For most of these villagers, a child’s illness, even something as treatable as malaria, can wipe out several months of savings, sending a family spiraling deeper into debt. The answer, according to the Gates Foundation — no slouch when it comes to solving global problems in an accountable manner — is “bringing safe financial service to the doorsteps of the poor.” As a means to that end, the Foundation has pledged $350 million for microfinance, whose beneficiary is primarily women.

Geeta, 32, would be a typical candidate. An orphan at age three, Geeta was raised by her elder sister. She didn’t go to school and was married to an alcoholic uncle when she was a teenager. Today, she works as a housemaid in Bangalore to feed her family of four: Her husband, her two sons and herself. Geeta’s life goal is to educate her two sons. But she lives in a cycle of debt — borrowing to repay past loans, to make annual school payments for her sons, to cover family events like weddings and every time someone in the family falls sick. Geeta, it so happens, works in my house.

Two years ago, Geeta heard about Janalakshmi, a microfinance company, from some women in her neighborhood. She joined a group of women and borrowed Rs. 30,000 (about $600) with the understanding that they would help each other not default on interest payments and take turns reaping the benefits of the loan. Each group has a leader who guarantees the interest payment to the microfinance institution and in turn, the leader invites women she trusts into the group so that they can borrow larger amounts. For now, Geeta’s microfinance loan is only allowing her to pay back her previous debts, but she dreams of the day when she can borrow enough money for a down payment on a home.

More and more entities are recognizing the power of micro-loans and how they can elevate an entire segment of society. And the route to the underserved is frequently through women, thanks to models based on Grameen Bank and others. Chennai-based Equitas, for instance, only works with women. In March, The Indus Entrepreneurs (TiE) launched Stree Shakti, a platform for training women entrepreneurs at all levels of Indian society. Goldman Sachs’s ambitious “10,000 Women” program aims to train and develop women entrepreneurs across the globe by pairing them with resources in the West. In all these cases, women serve as the lynchpin for programs, whether they are rural Self Help Groups (SHG) or global programs that aspire to foster entrepreneurship.

Microfinance is not the only answer to solving the poor’s problems but it is one good way to help women help themselves. Women self-help groups are burgeoning all across India, and study after study shows that they successfully impact women and bring them out of poverty. In an article that appeared in the December 2007 issue of UNDP’s Poverty in Focus, researchers Ranjula Bali Swain and Fan Yang Wallentin of Uppsala University in Sweden examine the link between microfinance and women’s empowerment using household sample data collected from five states in India in 2000 and 2003. Their results “strongly demonstrate” that there is a clear link between women’s participation in a Self Help Group (SHG) and their empowerment.

The good news, at least in India, is that these microfinance initiatives are reaching bigger swathes of the underserved. The Indian School of Microfinance for Women (ISMW), for instance, goes one step deeper into the problem. Based in Ahmedabad and chaired by social activist and SEWA founder Ela Bhatt, the school recognizes that borrowing money is only one part of the triangle. Among other things, the school teaches women how to deal with the money they borrow through capacity building workshops, networking and providing knowledge resources. Simply put, it takes Goldman Sachs’s global vision for women entrepreneurs and translates it into a deeper regional focus. The school’s website lists ‘hand-holding’ as one of its goals. Participants of micro-credit schemes are taught financial planning and investing techniques that they can use on the ground and in their business.

While microfinance works to eradicate poverty, the next generation of Indian leaders, including Rahul Gandhi, has made social sectors its calling card. The rural development portfolio, which traditionally was one of the less-prized posts, has now vaulted to the top of the pecking order, thanks in large part to the Gandhi family which has aligned itself with the aam admi (poor people) in both its campaigning and future promises. When Manmohan Singh was asked in a recent television interview if he had any regrets about areas that he couldn’t concentrate on in his first term that he would focus on in his second term, he said, “I’d like to work on agriculture, education and rural health.”

Panchayat women leaders have been especially active in bringing education to their villages even though they are frequently held hostage by caste politics and quotas. Rural education is a quagmire of poor policies that nobody in government seems to have the will to change. The recent Administrative Reforms Commission repeats a long-standing recommendation that the selection of school teachers in rural schools be delegated to each panchayat instead of making it state-wide and therefore subject to caste-based selection. Deploying state-selected teachers to rural schools in areas where they have no caste-based affiliation makes it a losing proposition from the get-go, according to some experts. Detractors contend that delegating teacher-selection to each panchayat will make it subject to bribes and corruption. But as one official in the Administrative Reforms Commission put it, small-scale rural corruption (with some accountability) is better than the large-scale corruption (with no local accountability.)

Panchayat leaders who don’t have a say in the kind of teachers their village-schools attract end up focusing on infrastructure and other issues within their purview. Women panchayat leaders talk about building separate bathrooms for girls, which studies have shown will reduce the number of female drop-outs after puberty. They bring safe drinking water to their students. All these are not just palliatives, but are necessary developments in rural education.

It is easy to be cynical about yet another federal election that promises improvements to local government and to the lot of women. This time may be different, not just because of the number of women in parliament and the panchayats, but also because Rahul Gandhi, a rising star in Congress politics, is tapped to oversee the rural government portfolio. One can only hope that the Gandhi scion will free the portfolio of its state-level stranglehold and pass along more power to the people. Non-partisan economists have long called for decentralized local governance as the only way to speed up the impact of reforms. To that, I would add two other objectives: wider access to micro-loans as an enabler, and genuinely empowering women in local governments to succeed.

Putting the spotlight on the Weavers Gallery

Putting the spotlight on the Weavers