This season is hard for birding.  The trees are lush with leaves.  Small birds are chirping and I can’t see them.  Drives me nuts.

How to identify birds just by seeing them 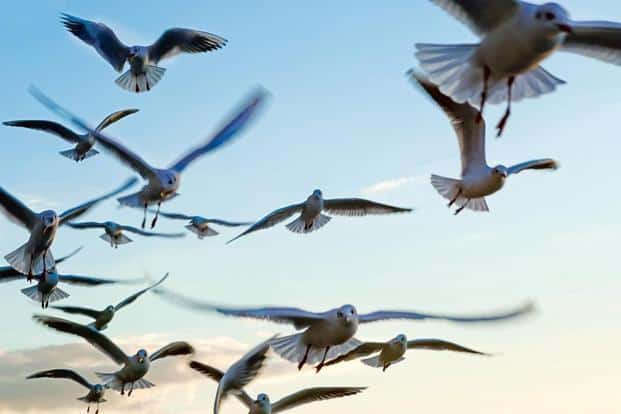 As a classic vata, I have acute hearing, as a result of which I’m very sensitive to the sound of birds. As I write this, I hear three birds: a wagtail, a bulbul, and a parakeet. This can become a curse when I hear the sound of a bird that I cannot identify. I obsess about it and go to an app called Bird Calls, that is loaded on my phone to try to figure it out.

Some visually sensitive birdwatchers can identify birds as they fly past; as they sit in a distant tree; from a mere one-second sighting. I am not like that. I work hard at identifying birds. I have to focus on them for a while before I can see all the markings and figure it out. I make frequent mistakes, even with birds that I know. Is it a grey heron or a pond heron? Is it a painted stork or not? The bird flies away. I am not sure.

It all has to do with a way of seeing that is cultivable but not necessarily common. I use the Cornell Lab of Ornithology’s website (Allaboutbirds.org) to build seeing skills. The trick to quick identification is differentiating or sorting birds based on size and shape, colour patterns, behaviour and habitat, according to this website. They even have a Merlin Bird ID app but I find that it is heavily North America focused and therefore not useful to me.

I have still not cultivated this way of seeing yet. Mostly I stare at a tree where the bird calls emanate from and wait for movement. I cannot drive by birds on telephone poles and quickly identify them. Where I score is with the sound. Once I hear and identify a bird by its call, I never forget it. Even now, I can wake up and listen to the trill of a Kingfisher calling at a distance and know that it is in my neighbourhood. I know the Rosy Starlings that have migrated from Tajikistan by their excited cheep-cheeps; the bulbul, by its sweet piercing whistle that echoes around my building; and the crow by its caw.

My birdwatching happens through the day. Usually, when I’m bored or have nothing to do, I pick up my binoculars and look out. Usually I see something. There was the time when it was raining. I trained my binoculars on a Ficus tree, and found a golden oriole perched on top. It did the most amazing thing. It circled and went upside down on the branch, almost as if it wanted the rain to wet its underside. It had been a terribly hot day. As I stood and watched the oriole enjoy the water drops, I felt like doing the same. On another branch, a Black Drongo (Dicurus macrocercus) sat still, enduring the rain that was pouring on its black head.

In the beginning, with pig-headed ambition, I decided that I would memorize the Latin names for all the bird species that I saw. I have given up that endeavour now. It is complicated enough to keep track of the markings and learn the common names. This then is the other learning that will occur: spotting minor differences between birds that belong to the same species: White-cheeked Barbet, Grey-headed Barbet, Coppersmith barbet, Blue-throated Barbet, you get the picture. They all belong to the Megalaima species.

The bird that is easiest to observe is the kite. They sit still for long periods of time on a high branch or electric pole and watch their surroundings. Suddenly, they lift off to catch a wind current that takes them high in the sky. They circle around for a long time—up to 20 minutes—before coming down for a break. The only time I have seen a kite attacked by a smaller bird was when I was walking near Ulsoor Lake in Bengaluru. I can recognize the keening sound that the kite makes, but for the first time I heard it shriek—and unceasingly. I stopped in my tracks and looked up. There was a crow attacking a kite’s nest. The kite would try to nip the crow, which would fly away to the nearest branch, and then return. The kite would shriek, peck the crow, would fly away and then back. This scenario continued for 15 minutes. Neither bird gave up; but I did. None of the people passing by noticed anything. I wouldn’t have either, had I not been a birdwatcher. Once you peer into the kaleidoscope of nature, she opens your eyes to the magic all around.

I use several websites to figure out what I’m seeing. India Nature Watch is great for just identifying birds. Indiabirds, The Internet Bird Collection, and Oriental Bird Images are good for learning about the various genus and species. Facebook has Birding Friends, where wonderful images come up on my feed. Although I am not a nature photographer, I follow several friends who are bird photographers. Their close-up images of birds help me with future identification. It doesn’t come easy to me but I struggle at it anyways. Slowly and surely, like a tortoise, I’m climbing up the hill of taxonomy and nature watching.

This is the third in a four-part series on birdwatching. Write to her at [email protected]