Book launches and authors in Bangalore

Book launches and authors in Bangalore

Bluru: How the tech capital is reinventing itself as literacy hub

Can Bengaluru as a city inspire tales, stories, books, films and more– in the way that London and New York have done, or Florence did during the Renaissance?

It is raining books in Bangalore.  Well, it is raining as well.  Festive shoppers wade through puddles and storm drains to buy their mango leaves, fruits and flower garlands on Sampige (the word means champaka in Kannada) Road in Malleshwaram.

The rains cleared just enough last week when Rohini Nilekani had her book launch.  Titled, ‘Samaaj, Sarkaar, Bazaar: A Citizen-First Approach,’ the book focuses on her lifelong passion for strengthening society or ‘samaaj’ to balance and negotiate with the government (sarkaar) and the markets (bazaar).

At the recently concluded, Mysuru Literature Festival, Shubha Sanjay Urs, the founder brought together award-winners such as Rickey Kej and Geetanjali Shree to R. K. Narayan’s hometown.  Since I want to improve my Kannada these days, I listened to the Kannada sessions which were terrific.  The session on nature included stalwarts like Dr. Sanjay Gubbi, Dr. Mewa Singh and Pamela Gale Malhotra, who, along with her husband bought 300 acres of land in Kodagu (Coorg) and have made it an animal sanctuary.

Speaking of environmentally inclined folks, acclaimed ecologist, Dr. Harini Nagendra whose earlier book, “Nature in the City” mixes history with sustainability has come up with a delightful series called The Bangalore Detectives Club, featuring a sari-wearing sleuth. The series, set in 1920s Bangalore is a must-read for all of us newer Bangaloreans who don’t understand the nostalgia that old Bangaloreans feel for this beautiful city.

Prolific author, Andaleeb Wajid promotes other Bangalore authors like Anuja Chauhan, Bijal Vachharajani and Aruna Nambiar in her Substack newsletter. Her own books are Bangalore’s answer to those Harlequin romances we all read on a rainy afternoon. Try her latest, “Accidentally Married,” if you are in the mood for romance.

Books are both a universe and a slow, private pleasure. Platforms like the Bangalore Literature Festival, Neev Literature Festival, and the book clubs that proliferate in this city try to juggle heavyweights like Sudha Murty and Ramachandra Guha with emerging voices such as Sabin Iqbal and Manu Bhattatiri, always a “fine balance.”

Some platforms like the New India Foundation and the Bangalore International Centre make their home here but don’t make a conscious effort to root themselves in this soil. Some authors do. Paul Fernandes’ work, for instance, gives new Bangaloreans an excellent introduction to what this city has lost and gained. Zac O’ Yeah writes about Majestic, which is to Bangalore what Grand Central Station is to New York. But many other authors like Vikram Sampath or Anita Nair are from here but not their books. Does it matter?

Creative output is hard to engineer and even harder to manage. It is an ineffable thing that happens over decades and requires a confluence of factors in order to flower. The Rennaissance for instance, began in Florence because of patronage from the Medici family, the migration of Greeks with their manuscripts to Italy after Constantinople fell, and most importantly, educators who wanted to teach the citizenry to speak, write and read the humanities. Bangalore has immigrants in spades but most are economic immigrants who come here to do start-ups. It has patronage from the city’s elite. What it lacks is a citizenry that are interested in debating and discussing the humanities and arts. We lack the classical Bengali adda culture, which is perhaps why Kolkata (along with Mumbai) are the two Indian cities which are closest to creating a cultural ferment.

That can change for Bangalore. The origin of the word Rennaissance was the Italian rinascita, which means rebirth or revival. Post Covid (fingers crossed), several organizations are trying to create “addas” in Bangalore. Virtual addas don’t count in my opinion. You need physical presence, people meeting in person in order for ideas to have sex and create new forms. Design Friday, run by entrepreneur Sujata Keshavan used to do that.

The other necessary but not sufficient factor for creative ferment is that they cannot be Pan-Indian and “place-less” like Algebra Conversations. Clubs or Addas require a membership. The same folks need to show up again and again in one location– such as happens in Koshys or Blossoms bookstore.

There are rumblings that this may happen in Bangalore. There is talk of a discussion club which brings together the same group of people in a closed-door format. Every cultural institution in Bangalore needs to have a version of this, ideally with a mixed bag of people. Rangashankara, Museum of Arts and Photography, Takshashila, Bangalore International Centre, Indian Music Experience, Gayana Samaja, and others can be the vessel in which creativity can boil over.

The question is whether the time for this Rennaissance-rinascita-rebirth is now? 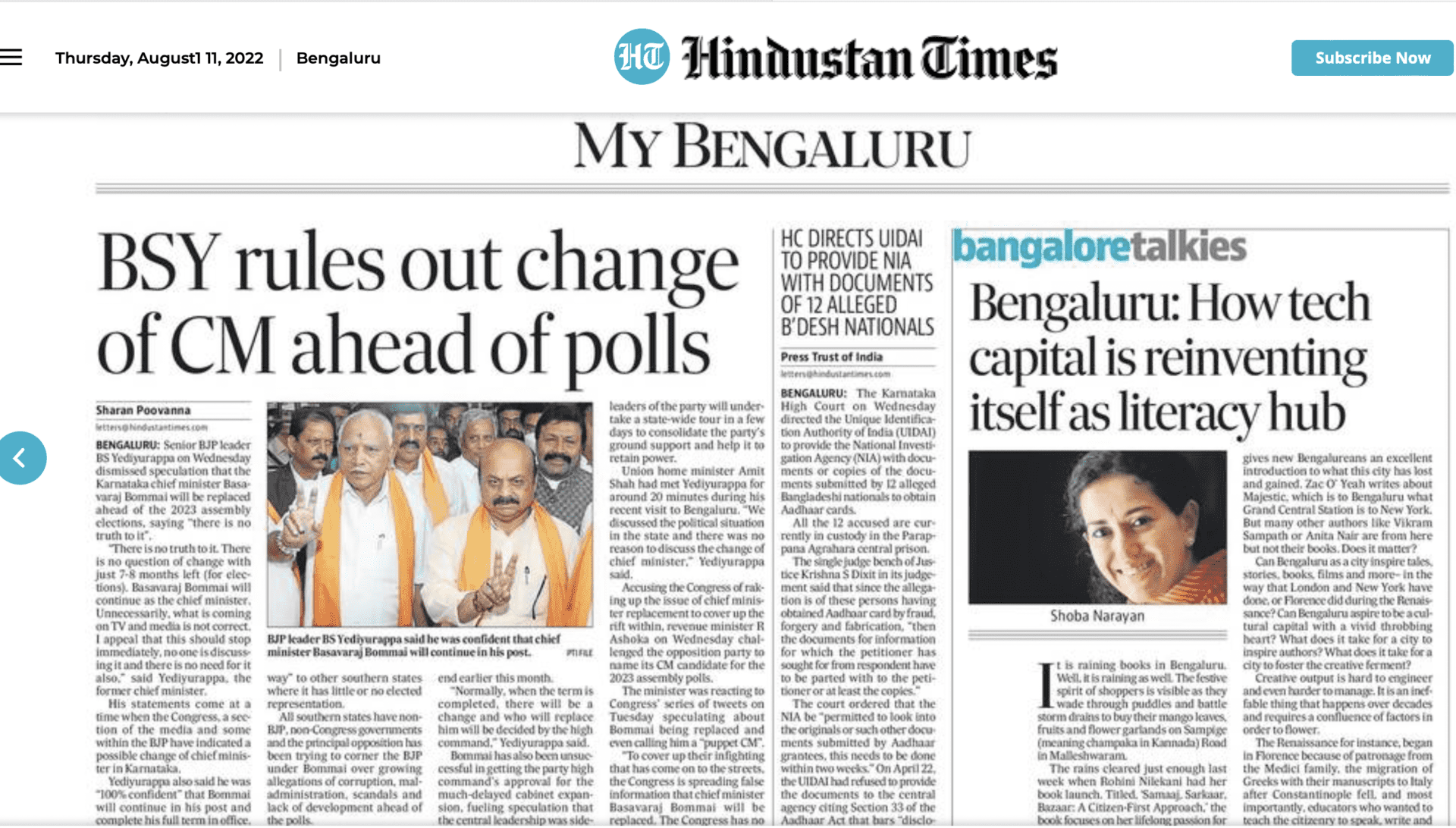