The best part of this piece was the punny-funny response I got from a friend in Chennai, which I have appended below after taking out all identifying characters.

He first sent a handwritten note on the computer, complimenting the piece.

To which I replied.
Thanks. Love, love, love (and am quite jealous of) your handwritten note.
Why can’t the iPhone have a stylus?

My Chennai friend’s response:
Alas. Steve Jobs eternal dislike of all things Scully…hence everything that Newton had had to be dropp-ed…..maybe something will get Cook-ed soon?

Made my day!! My husband is a great punster, something which doesn’t fly in our family. I’ve figured out why. You need wit and the ability to connect disparate dots to pun. It has to do with quick-thinking more than intelligence (as a bad punster, I choose to believe that). And what’s the response to a pun? The punster is thrilled with his clever line and the rest of us listeners are pissed off. This was the story of our marriage for a while. It’s taken me this long to figure out the right response to a punster. Offer another pun. They love it and this competitive sport keeps going till someone tires out. Got to write about puns someday. Ok, people if anyone can “up” the response to Steve Jobs-Scully-Newton- and Cook, let’s have it.

Below is the piece. Almost an afterthought. 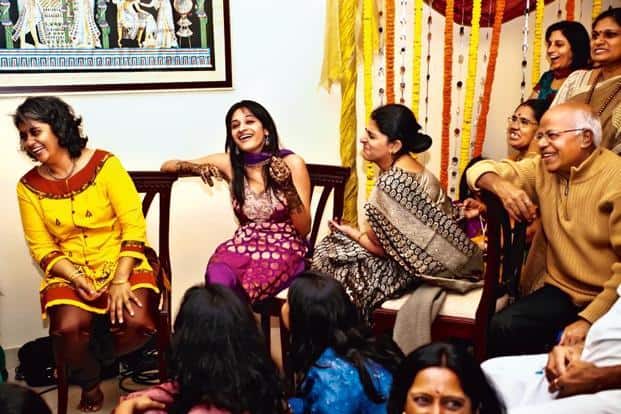 A mehendi ceremony before a Tamil wedding in Chennai. Photo: Chitra Aiyer
At a recent Chennai wedding, the bride wore white. “Shiva shiva,” said a guest. “What is the world coming to? White is the colour that Hindu widows wear and this young chit of a girl is wearing it on her wedding day.”
The bride also wore a “half-sari” for the engagement; a magenta nine-yards sari for the muhurtham, and a Vera Wangesque white designer gown for the reception. Multiple costume changes are becoming common in Tamil weddings. As are songs and dances.
Put it down to Punjabi envy. One wedding invitation included “Adalum padalum”, a clumsy phrase which literally means “dance and song”, an obvious rip-off of the sangeet. It also formally announced (or warned, depending on how you look at it) that “madhu and panagam”, or “liquor and non-alcoholic drinks”, would be served at the reception, lest the entire elder population leave in a huff. The groom’s party leaving because the proverbial “poli” (sweet) didn’t have “ghee” is a wedding legend, typically done right in the middle of the banana-leaf meal or “saapad”, after dramatically shaking your rice-laden hand over the leaf.
In lieu of the baraat, we have always had the mappillai azhaippu, or “inviting the groom”, with him arriving in an open-topped vintage car, busting his guts and sweating profusely in a tight suit. All these changes are nothing short of a revolution, given that most TamBrahm weddings involve long recitations of mantras that nobody understands, while guests stare at the dais in a heat- and smoke-induced daze.

“Chennai has changed,” says Urmila Sathyanarayana, one of the city’s top Bharatanatyam dancers and my college classmate. Urmila has been performing and teaching for over 17 years. Her dance school, Natya Sankalpa, in the tony Kilpauk Garden area, has 200 students on the rolls. Part of the change is the softening of Chennai’s famously blunt tongue. “When I was learning dance, teachers would say (and this sounds better in Tamil), “You are black (dark), so this costume won’t suit your skin colour. Or they would say, ‘You are fat.’ Nowadays, we don’t talk like that in Chennai. We emphasize the positive.”
As someone who was routinely greeted at family weddings with a “Hey, what happened? You look like a (insert preferred insult, scarecrow being one of them),” I welcome Chennai’s new political correctness.
This old-new layering is more amplified in Chennai because the city has a strong sense of place that almost veers on a cliché. Locals drink “south Indian filter coffee” with milk at home every morning; shop at Ranganathan Street for things that they didn’t know they wanted; visit the Shrine Velankanni church with auspicious turmeric paste on their faces; draw elaborate kolam designs with rice flour on courtyards for decoration and as an offering to ants; prostrate before elders out of respect; and learn traditional Bharatanatyam dance or Carnatic music.

Urmila says that Chennai’s layers are visible every day. “My daughter has a great nightlife. But she also chants slokas at home with my husband. Similarly, her friends are modern young people but they know that we look for rahu kalam and ashtami navami—auspicious hours and times to start anything. So they will say: “Aunty, I am buying a new cellphone. Can you check out that eighth moon thing?”
Lakshmi Venu, vice-president in charge of global business at Sundaram-Clayton Ltd, traverses both these worlds. With her well-cut dresses and stylishly short hair, Venu would fit right into Newbury Street, Boston, where her husband, Rohan Murty, is based. But when in Chennai, she socializes with her school friends from Sishya; talks to her grandmother every day; visits cousins, and laughingly admits to a “family forest, not family tree” of relatives she sees at weddings.
She isn’t unusual among the TamBrahm business families that still rule Chennai, each with a web of cousins and relatives managing different arms. “But the great thing about Chennai is that beyond a point, people don’t care who I am or what I do. People are really genuine in that way,” says Venu. “It may not be the most exciting city for a tourist but it is a great city to call home.”

Chennai is my hometown and I am inordinately, irrationally possessive about this city. Every time I return these days, there is something new; something atypical; something unnerving. The autorickshaw drivers are still rude as I haggle with them in street Tamil (when in doubt, use the swear word savu gracki, whose exact meaning, I confess, I don’t know). But when I ask the autos to take me someplace new, they take me not to a new tiffin-joint but to Toscano and Kryptos. Who eats Greek in Chennai—although I grudgingly grant that it is one cuisine that makes sense in this hot city? The roads are still perfumed with that potent combination of petrol fumes and Madurai jasmine, but now clover-shaped flyovers make the traffic flow better than Bangalore. And who buys the trench-coats from Burberry during the Agni Nakshatiram (fire star)? “The city grows on you,” says N. Kumar, vice-chairman, The Sanmar Group. “Chennai is not hurly-burly like Bombay (Mumbai). People are more relaxed here.”

Relaxed they may be, but Chennaiites are also parochial, somewhat like the American South, sticking to relatives and friends they have known all their life. The city has the third largest population of expats, after Mumbai and Delhi, but expats find it difficult to break in. “My French employee said that it took him six months to make friends in Chennai,” says B. Santhanam, managing director, Saint-Gobain Glass. “But later, he said that he learned Scottish dancing here; went parasailing outside Chennai. There are hidden pockets in the city where the most interesting things happen.”
Interesting is okay; interesting pockets are good. I just hope that they don’t cleave away the Chennai of my childhood. My Chennai.

Shoba Narayan eats badam halwa in Chennai because the heat and sweat take all the pounds off. Or so she’d like to believe.
Also Read | Shoba’s previous Lounge columns