My friend, Chitra Srikrishna and I are doing a music event together on March 14th. Details here. A happy result is that I am reading a lot about Carnatic music. Ranging from Pantula Rama’s book to Sangita Ratnakara to white papers.

Two chance conversations started this. In both cases, the two music lovers were gushing about TM Krishna’s “musical genius” and berating what he was doing with the concert-format. I found the intensity of responses intriguing. And thus began this series of four parts. 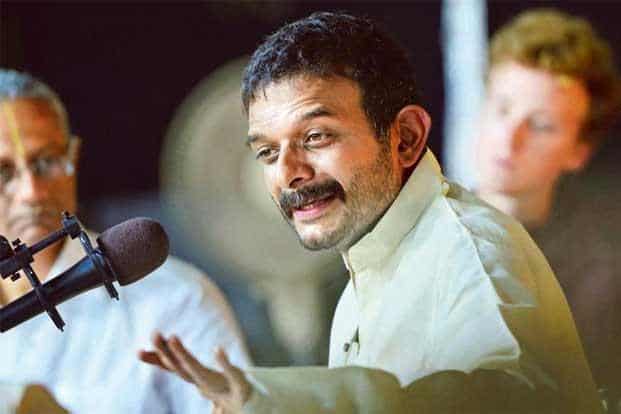 Chennai, the city I grew up in and still call home is in the throes of a creative ferment, at least with respect to Carnatic music. This has caused some apoplexy and bile among many keen ‘rasikas’ or lovers of music, who live in homes where even the pillars sing, as an ancient Tamil poem said about the author of the Tamil Ramayan, poet Kamban’s home.

These are homes in the bylanes of T. Nagar and Mylapore where the home-ground Narasu’s coffee (my father drinks it) is piping hot and frothy; where the pichi-jasmine is pink rimmed and smells of a beautiful woman’s hair—the one described in the Sangam Tamil poem “Kongu ther vazhkai anjirai thumbi,” which legions of Chennai’s students memorized from their trusty “Konar notes”; and where Carnatic music is played from dawn to midnight.

Carnatic music, for South Indians is not just music; it is a milieu. It thrives in Chennai where most of the top musicians live, but it has a vast cultural network with tentacles all over India. It draws within its fold the bharatanatyam dancers of Matunga, clad as they are in mustard yellow, parrot green and maroon Chettinad sarees. It includes the maidens of Palghat, Kerala, who step out in the morning with dripping wet tresses tied in a loose knot called the ‘aathu kattu.’ It also includes those Delhi army officers with long names like Lakshminarayanan who settle their stomachs with curd rice and piquant vadu-manga pickle couriered from Thanjavur, after enjoying the single malts in Delhi’s swirling party scene. These are men and women, aunties and uncles who can expound on the difference between the ragas, AnandaBhairavi and Reethigowlai; who can snatch a Saramati ragam (which is how South Indians say it—name first and ‘ragam’ next) from the sound of the waves; and who venerate the musicians of yesteryear like Ramnad Krishnan and Voletti Venkateswarulu. It is these ‘mamas’ and ‘mamis,’ the South’s version of ‘uncle-jis’ and ‘aunty-jis’ who froth at the mouth at certain new developments in Chennai’s cutcheri (concert) circuit.

One of the objects of their ire is a musician-singer named T.M. Krishna and the reason for their sound and the fury has to do with Krishna’s “messing with” the traditional cutcheri paddhati or format. Krishna sings varnams in the middle of a concert, for instance. These fast-paced compositions are typically sung at the beginning of the concert to warm up the voice and energize the audience. Krishna has, on occasion, trailed off after an alapana or flight of musical imagination of a raga. Instead of singing the composition that comes after the improvisation, he has asked his violinist to do the job instead. All this has my uncles and aunts who are rabid, devoted and opinionated concert-goers in all of a lather. I recently attended a family lunch where no one could agree on anything including whether peanuts were appropriate additions for a lemon-rice; or the origins of asafetida (it originated from Afghanistan for the record). But they were united in the condemnation of “modern” musicians who mess with tradition. My eldest aunt shook her handkerchief so vigorously while speaking “on the matter” that the rest of us were doused with the Gokul sandal powder that she spirits into her kerchief. My uncle—her husband—was frothing at the mouth and not because he had slurped a large mouthful of coffee. In fact, my uncle never slurps. He pours the hot coffee straight down his gullet, which has over the years developed a kind of acid coating to all manner of hot fluids going down its centre, tainting neither tumbler nor esophagus as far as I can tell.

In speeches and interviews, Krishna has tried to explain why he is breaking the mold. The cutcheri format as it exists today is less than 100 years old, he correctly says. It was formalized in the 1920s by Ariyakudi Ramanuja Iyengar to follow a standardized format. First, a brisk varnam; then an invocation on Lord Ganesha; then a few fast-paced krithis or songs without the improvisation; then a heavy piece in a ‘ghana’ ragam or weighty ragam like Kambodhi, Kalyani, or Bhairavi. Then the centerpiece of the concert or the RTP– Ragam, Thanam, Pallavi, which is raga improvisation followed by swara-play followed by the song in a ragamalika or garland of ragas; then the virtuoso “thani avarthanam” display by the accompanying drummers; then the lighter fare called ‘thukkada’ which include bhajans, abhangs, padhams, javalis and the like. This is how a typical Carnatic music concert is structured and most concertgoers time their bathroom and bonda breaks to suit this format. In changing this structure, Krishna has derailed the audience; and put a spanner, or in his case, silence in the works of when they go out to stretch their feet and gossip about sabha secretarys.

I too had a similar knee-jerk reaction when Krishna “pulled his stunt,” as some purists might call it, at a Bangalore concert. After shifting the varnam to the middle of the concert, he explained that there was no rule that stated that varnams had to be sung in the beginning; that he was just trying to innovate with the format.

My view, however is different from the average Chennai rasika who views Krishna’s experimentations as being disrespectful of tradition; and altogether too bold, indeed cocky. I think Krishna is right to experiment. I also think he is not bold enough; not imaginative enough. Read on…. Next week…..

Shoba Narayan is practicing pouring green tea down her gullet.