How to bring up kids?

How to bring up kids?

Is an iPod their birthright?

This is something I think about a lot. While I know that there is no magic formula for parenting, chasing one seems unavoidable if you are a parent. Whether you are a teacher, or a parent, or run summer camps, dealing with kids is an engrossing puzzle simply because there doesn’t seem to be one right method. The variables are too many– the kid, the adult, the situation, the kid’s personality, the adult’s personality, the other children involved, the history….the list goes on. But still we keep trying.

Is an iPod their birthright?
The realization usually comes as a wake-up call after a question or a comment
The Good Life | Shoba Narayan

The summer holidays are looming. The children will be home. What are you going to do? Send them to camp? Fly off on a holiday to the Caribbean? Ask them to do chores around the house? Or all of the above?

One of the first things Michelle Obama did after entering the White House was tell the staff not to make her children’s beds. She wanted her girls to do chores, just like she did while growing up. Later, in a television interview, Obama told Barbara Walters that her children definitely believed in Santa Claus. Why? Because their parents would never buy them so many gifts at one time.

Obama’s quest to keep her daughters “grounded” while in the White House reflects a conflict that most upwardly mobile urban parents face today: how to enjoy the fruits of your labour without turning your children into spoiled brats. 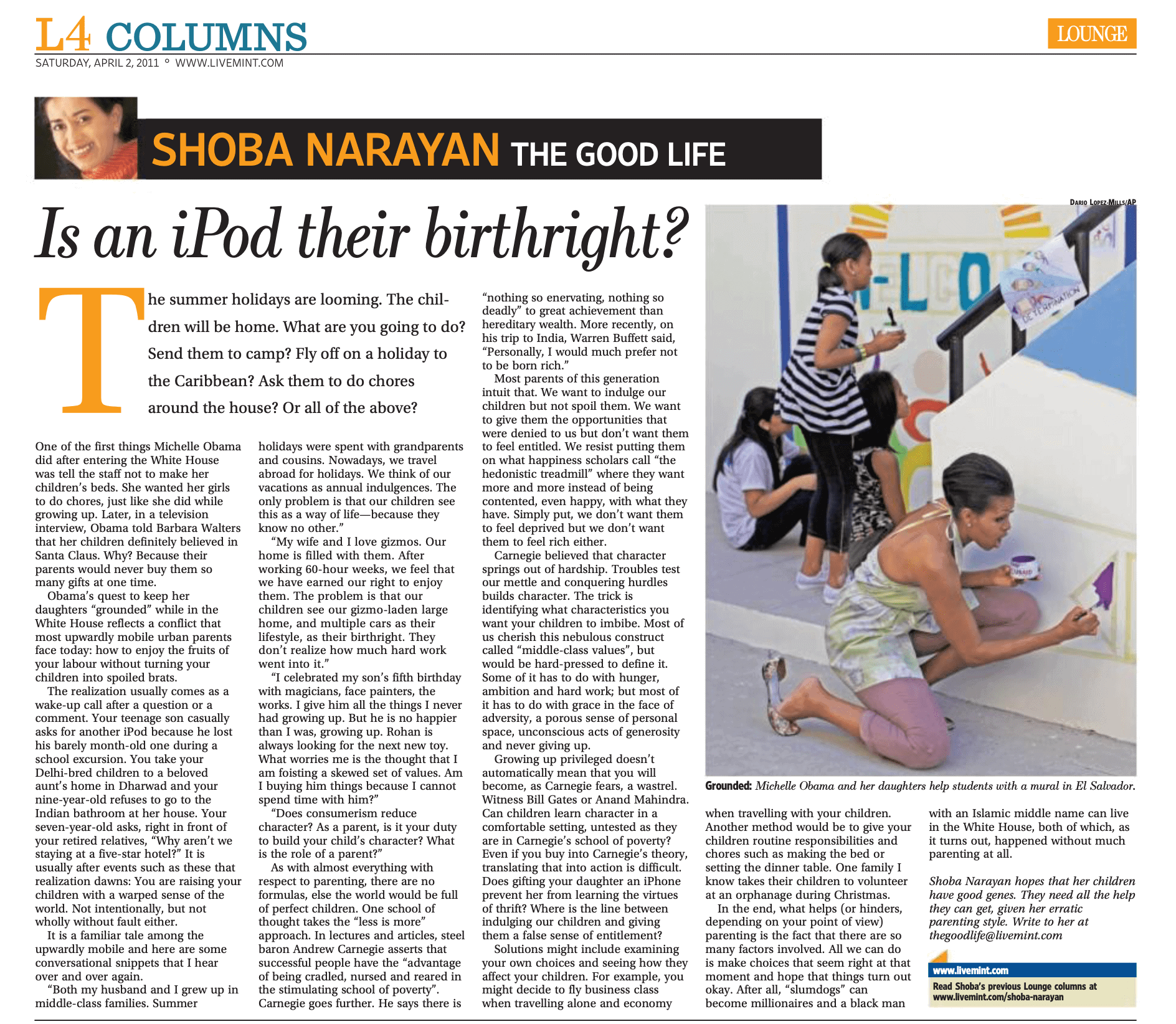 The realization usually comes as a wake-up call after a question or a comment. Your teenage son casually asks for another iPod because he lost his barely month-old one during a school excursion. You take your Delhi-bred children to a beloved aunt’s home in Dharwad and your nine-year-old refuses to go to the Indian bathroom at her house. Your seven-year-old asks, right in front of your retired relatives, “Why aren’t we staying at a five-star hotel?” It is usually after events such as these that realization dawns: You are raising your children with a warped sense of the world. Not intentionally, but not wholly without fault either.

It is a familiar tale among the upwardly mobile and here are some conversational snippets that I hear over and over again.

“Both my husband and I grew up in middle-class families. Summer holidays were spent with grandparents and cousins. Nowadays, we travel abroad for holidays. We think of our vacations as annual indulgences. The only problem is that our children see this as a way of life—because they know no other.”

“My wife and I love gizmos. Our home is filled with them. After working 60-hour weeks, we feel that we have earned our right to enjoy them. The problem is that our children see our gizmo-laden large home, and multiple cars as their lifestyle, as their birthright. They don’t realize how much hard work went into it.”

“I celebrated my son’s fifth birthday with magicians, face painters, the works. I give him all the things I never had growing up. But he is no happier than I was, growing up. Rohan is always looking for the next new toy. What worries me is the thought that I am foisting a skewed set of values. Am I buying him things because I cannot spend time with him?”

“Does consumerism reduce character? As a parent, is it your duty to build your child’s character? What is the role of a parent?”

As with almost everything with respect to parenting, there are no formulas, else the world would be full of perfect children. One school of thought takes the “less is more” approach. In lectures and articles, steel baron Andrew Carnegie asserts that successful people have the “advantage of being cradled, nursed and reared in the stimulating school of poverty”. Carnegie goes further. He says there is “nothing so enervating, nothing so deadly” to great achievement than hereditary wealth. More recently, on his trip to India, Warren Buffett said, “Personally, I would much prefer not to be born rich.”

Carnegie believed that character springs out of hardship. Troubles test our mettle and conquering hurdles builds character. The trick is identifying what characteristics you want your children to imbibe. Most of us cherish this nebulous construct called “middle-class values”, but would be hard-pressed to define it. Some of it has to do with hunger, ambition and hard work; but most of it has to do with grace in the face of adversity, a porous sense of personal space, unconscious acts of generosity and never giving up.

Growing up privileged doesn’t automatically mean that you will become, as Carnegie fears, a wastrel. Witness Bill Gates or Anand Mahindra. Can children learn character in a comfortable setting, untested as they are in Carnegie’s school of poverty? Even if you buy into Carnegie’s theory, translating that into action is difficult. Does gifting your daughter an iPhone prevent her from learning the virtues of thrift? Where is the line between indulging our children and giving them a false sense of entitlement? 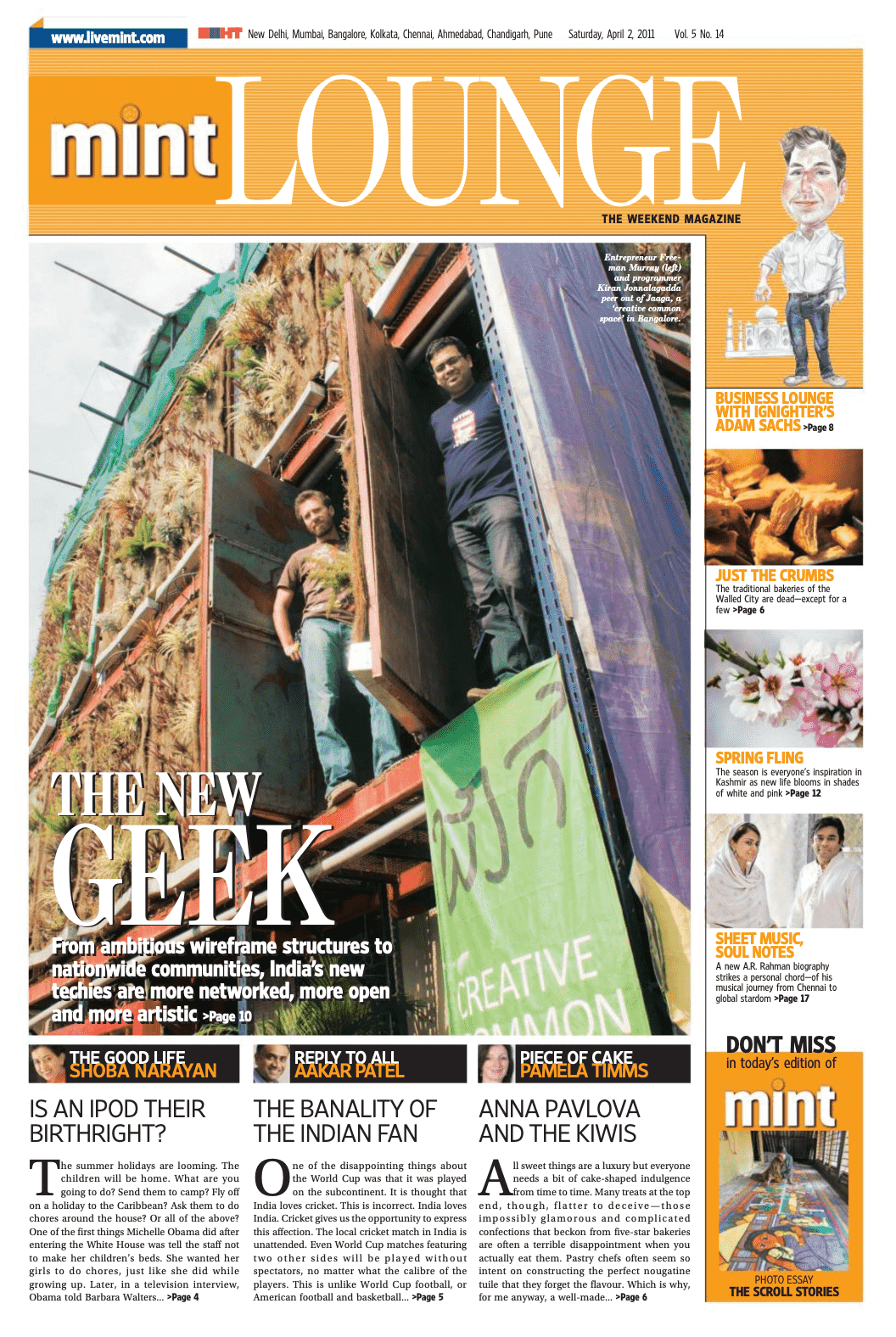 Solutions might include examining your own choices and seeing how they affect your children. For example, you might decide to fly business class when travelling alone and economy when travelling with your children. Another method would be to give your children routine responsibilities and chores such as making the bed or setting the dinner table. One family I know takes their children to volunteer at an orphanage during Christmas.

In the end, what helps (or hinders, depending on your point of view) parenting is the fact that there are so many factors involved. All we can do is make choices that seem right at that moment and hope that things turn out okay. After all, “slumdogs” can become millionaires and a black man with an Islamic middle name can live in the White House, both of which, as it turns out, happened without much parenting at all.

Shoba Narayan hopes that her children have good genes. They need all the help they can get, given her erratic parenting style. Write to her at [email protected]