Today morning, the first thing I did was to go out, pick up all the newspapers and hide Mint Lounge. My parents are temporarily staying with me and I didn’t want my father to read my column today mainly because of the use of the swear word– “Fuck me shoes.”

I lead many lives– some for my readers and some as the good daughter/daughter in law. Sometimes these worlds collide much to my dismay. So the Lounge is hidden. Problem is that my Dad has just gone to my brother’s house and I am sweating bricks and hoping that he will not find or read the Lounge issue there.

I loved writing this piece. I felt bad about using my daughter as a humor tool. What is it about storytellers? We are so selfish about ‘using’ the people around us for the sake of a good story? All my favorite humor writers– Tina Fey, Joel Stein, V. Gangadhar, and David Sedaris ‘use’ their loved ones to enhance the story. In Lounge, Natasha Badhwar writes a wonderful column where she uses her family for personal insights. It is not humor– the genre I obsess about, but it is lyrical and intimate. I am not there yet. Anyway, here is the piece.

How Nirupa Roy scores over Jimmy Choo
What is it about women and stilettos? 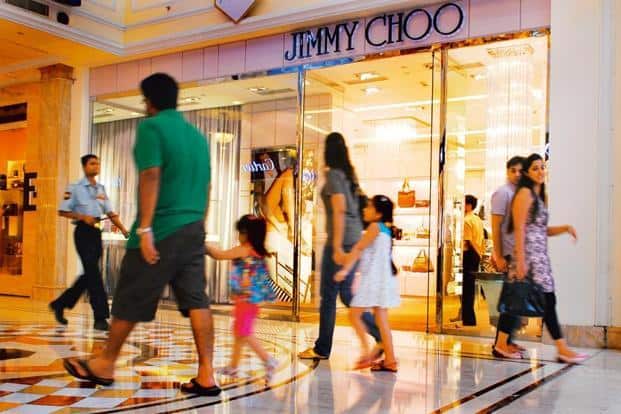 Would you give your first salary to your mother, like all the heroes did in Nirupa Roy movies, or spend it on something you have been dying to buy? Photo: Priyanka Parashar/Mint
With my first salary, I will buy a pair of Jimmy Choos,” said the teenager.
I stared at her crestfallen. “What happened to giving your first salary to your mother?” I asked. “It is a great Indian tradition. Watch any Nirupa Roy movie.”
“Who is Nirupa Roy?” she asked. This then is what is called the generation gap.
With her question, my daughter had effectively removed one of the perks of motherhood: the bit where I stand tall, suppressing tears, staring at the sky with a sideways tilt of the head, while my offspring falls at my feet and hands me an envelope full of cash.
“Arre..re,” I will say, and do that accept-reject gesture perfected by elders in Hindi movies. It is like reaching for chocolate when you know you have to eat ragi (finger-millet) biscuits. You want the object but don’t want to appear gluttonous. Your arm, as a result, appears epileptic.
Nirupa Roy. Photo: Hindustan Times
Nirupa Roy always hands back the envelope, but with a self-righteous sniff that says: “It is mine. I am only giving it back to you because my director said so.”
I am more straightforward. I would like to keep my offspring’s first salary as my due—for all those diaper changes and sleepless nights. But this is not to be, because my daughter wants to buy Jimmy Choos. As a modern mother, I can hardly blackmail her emotionally into doing what I want. Well, I can—and do; only more covertly than Nirupa Roy.
“Why Jimmy Choos?” I asked. “Why not Manolo Blahniks or Christian Louboutins?”
And thus began my interrogation, which ended with my daughter telling me to keep the bloody salary and storming out of the room.
I watched her receding back, both smug and dismayed. Yes, I told myself. I can still inflict neuroses on my child? But why did I judge her desire to buy stilettos? Was it because I never wore them?
I was a tall girl till—like a rocket that went phus—I stopped growing and became of average height. As a result, I never wore high heels while growing up. I wasn’t allowed to. With every centimetre that I grew, my grandmother said, the pool of Palghat Iyer boys became smaller. She made it sound like it was my fault. She stopped giving me Complan and Chyawanprash, while heaping teaspoons-full on my brother. To this day, I resent the differentiation, even though I hated those decoctions. If they could do an Indian version of Chinese foot-binding to keep me short, my folks would have done it. They tried making me balance heavy encyclopaedias on my head. They said it was to make me walk gracefully but I think it was to make me short. Asking for high heels in this environment was like giving the Mafioso a gun.
I considered wearing heels only recently. I got tired of listening to friends say that they were addicted to shoes. How can you be addicted to something that doesn’t sustain you in some deep intoxicating way—like ganja, not that I am advocating it?
I am shrinking these days and not in waist size. My waist is balancing out the shrinkage in other parts. So last week, I took out the two pairs of high heels that I bought in a rash shopping spree in the US last year. One is black and the other red.
They are not Jimmy Choos, although they could have been for I like Choo’s shoes, and not just because the phrase “Choo’s shoes” rhymes. I also like Christian Louboutin’s fire-engine red heels because they look distinctive. My favourite shoes—the ones I considered actually wearing fairly continuously—were Prada‘s flame shoes. They look like fire is coming out of your heels. I also loved Yves Saint Laurent’s gladiator shoes. I think it is because I have a gladiator fantasy. I imagine the earth trembling as I walk on these flame-gladiator shoes. Now, that would be memorable, which, along with subversive, are two adjectives I like. I almost bought a pair of Salvatore Ferragamo chappals at Singapore duty-free because they were subversive; also on sale, which helped.
What is it about women and stilettos? Feminist Germaine Greer called them “fuck-me” shoes because you could wear them to bed but not to walk. Only a feminist could make that statement and get away with it, even if it is an exaggeration. What is interesting about her statement is that shoes—more than clothes, watches, or belts—are tied up with female self-esteem? Women say that they wear high heels to feel sexy. I think that we wear heels to have men at our feet, quite literally: Our Louboutins, our Jimmy Choos and our Manolo Blahniks envelop and caress our soles. Feet, I think, are a completely underrated sex organ, witness that Netherlands woman who had a foot orgasm. Any man who wants to score with a woman ought to massage her feet.
Men have their sensible flats; their custom-made Cleverleys; but they certainly don’t use shoes for sex appeal. Perhaps they should. Tamil film actors certainly did—after a fashion. Kamal Haasan used to wear shoes with concealed heels; so the wags in Kodambakkam said. But even so, it wasn’t overt. Shoes are to women what watches are to men: a sex object masquerading as a functional one. Who needs watches these days anyway, what with people checking their phones or BlackBerrys every second? Watches, along with fountain pens, are feel-good items. My brother gave me a Montblanc, but the darn thing dries up because I use it so seldom. I should simply buy those Reynolds pens that my children use for school. At `5 a pop, they work every time, which cannot be said of the stilettos that Greer was alluding to.

Shoba Narayan uses her fountain pen for “show” but finds that she goes searching for a ball-pen to sign cheques.
Also Read | Shoba’s previous Lounge columns