I just loved attending this function. 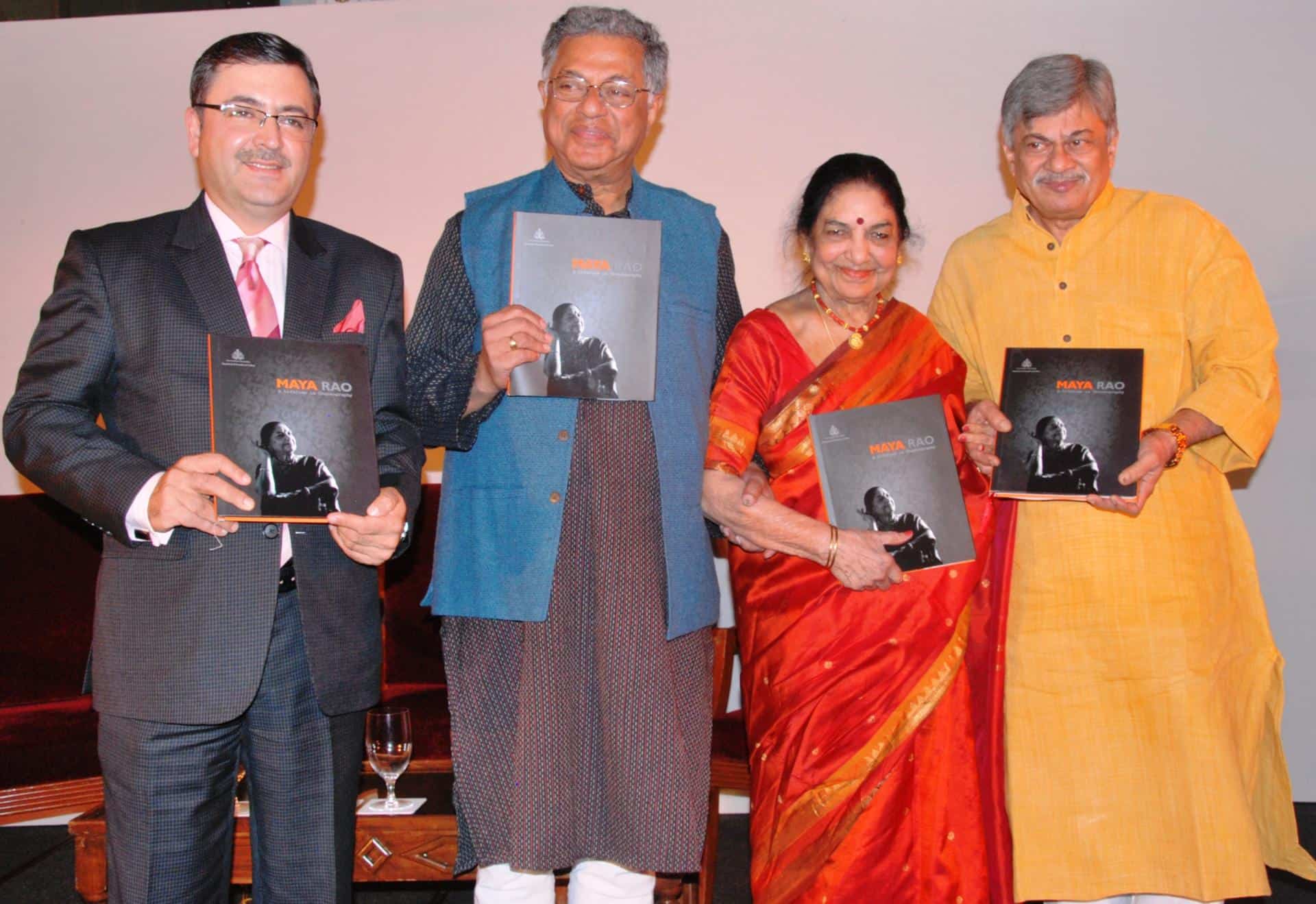 How Kathak breached the north-south divide

At last week’s book release function of Maya Rao: A Lifetime In Choreography, held at the ITC Windsor, Bangalore, the stars were all in attendance. There was Vimala Rangachar, who headed the Crafts Council of Karnataka, in a rare shimmering Patola sari; Girish Karnad, who spoke about hiring Rao, or Maya Didi as she prefers to be known, to choreograph his film that ended up not getting made. In response, Rao playfully talked about watching Karnad dance while the music was being played. There was the Kannada movie star and politician, Anant Nag, who said amid much laughter that he had never danced in any of his movies but his daughter was a student of Rao’s. Three people read excerpts from the book: author Vikram Sampath, singer Tara Kini, and media professional Sandhya Mendonca. Madhu Nataraj, Rao’s daughter, choreographed the evening with precision and flair. Then there was Maya Rao, 86, resplendent in a red Kanjivaram sari (or was it a Molakalmuru silk picked out by Rangachar?), smiling.
The most touching part for Karnad, he said later while we ate green pea hummus outside, was watching Rao emote and sing a Hindustani sequence that had to do with how to open your ghungat, or veil, in a few short steps. Rao said that it was taught to her by her guru, Shambu Maharaj, and indeed her book opens with a quote by Maharaj in Hindi, “Saale, budhape se nahin bach sakte (Damn, you cannot escape old age).”
It was the sort of evening that was distinctively Bangalore, which stands at a crossroads of north and south in terms of culture and is generous and accepting of both. This is different from Chennai, where I grew up.
In Chennai, and I dare say, in many parts of north India, the music and dance that you listen to and watch are very specific. The milieu I grew up in was suffused with Carnatic music and Bharatanatyam. It was all we listened to or watched. We knew the idiom, the gestures, and the music. But there was no sense for, or desire to learn, the other Indian art forms that were out there. In that sense, my childhood was very parochial in terms of the arts. I didn’t have a clue about Hindustani music or Kathak, for instance, until very recently.
Not so in Bangalore. Here, people know and accept both streams. It isn’t the Dharwad-Hubli region, which is truly the place in Karnataka where Karnataka sangeetham meets Hindustani sangeet (difference in pronunciation intentional), but Bangalore is Dharwad-lite.

If you ask people why Maya Rao is great, they will tell you one line: She brought Kathak to south India. As her book describes, she was based in New Delhi until former Karnataka chief minister, Ramakrishna Hegde invited her to come and set up a dance school in Bangalore. The school was inaugurated by the great Kamaladevi Chattopadhyay in 1987 and renamed the Natya Institute of Kathak and Choreography. It is a beautiful building in the heart of Malleswaram.
I have visited it because my daughter is a student of a student of Maya Rao’s. Rao does not know me and would not recognize me from the throngs of other parents who videotape beginner Kathak performances at the ADA Rangamandira in Bangalore, where she usually sits in front and observes the proceedings. But she shows up to watch the six-year-olds dance, and this is the other reason why Maya Rao is viewed as a legend in dance circles—she has trained over 3,000 students. “To us, she is like God,” says Meghna Rao (no relation), who dances in the Stem Dance Kampni, a contemporary dance company founded and run by Madhu Nataraj.

Certain art forms are more connected with a country’s culture than others. To understand Russia, you have to know chess and ballet—the Mariinsky and Bolshoi styles, and names such as Vaslav Nijinsky, Svetlana Zakharova and, of course, Rudolf Nureyev. To appreciate England, you really need to know theatre—Shakespeare of course, but also West End. Fashion is a prism through which you can understand the French; rhythm the in-road into Africa. If you know and understand the tea ceremony and raku ceramics, you will understand the Japanese sensibility. The same applies for Dutch design, Italian opera, which opens up the soul of Italy to outsiders but only if you know the language, German automobiles, Catalan chefs, American start-ups, Chinese scale, and Korean pop. All these reflect an age and a culture.

Dance in my view is the route to India’s soul. It is the most effective way to immerse yourself in Indian culture; a shorthand kto the past. Dancers—whether they belong to the Kathak, Bharatanatyam or Odissi styles—inhabit a sacred space that is suffused with poetry, music, aesthetics, history, religion, and culture. To be a dancer, you need to know music, mudras or hand gestures, stories from the past, the distinctive Indian rhythms, theatre, aesthetics and jewellery, the Indian idea of beauty, our history, religion and therefore culture. At the very least, a young dancer will learn Urdu poetry and an appreciation for the animals, birds and nature that are depicted through gestures and poses.
What Maya Rao is known for is choreography. Once you get to a certain level, most dancers choreograph of course. But Rao was trained in Russia and systematized Kathak in a way that hadn’t been done before. Her institute offers a diploma in choreography. Her book is filled with characters who populated the vibrant artistic space that was India in the 1960s and 1970s: Siddheshwari Devi, Ravi Shankar, Anil Biswas, Inder Razdan, Kuvempu, Habib Tanvir and his wife Monica, Balasaraswati, Keshav Kothari, Rita Ganguly, and the doyenne, Kamaladevi Chattopadhyay.

I hadn’t heard of Maya Rao till a few years ago and I don’t know enough Kathak to figure out her place in the pantheon of dance greats. But I feel that anyone who has engaged in the same art form for 86 years and trained legions of students counts for one element of what most of us would call the good life.

Shoba Narayan assumed, till recently, that only Bharatanatyam had abhinaya and Kathak only footwork. Write to her at [email protected]