Just one more next week. I am about ready to write something else.

The cow chronicles: losing the calf 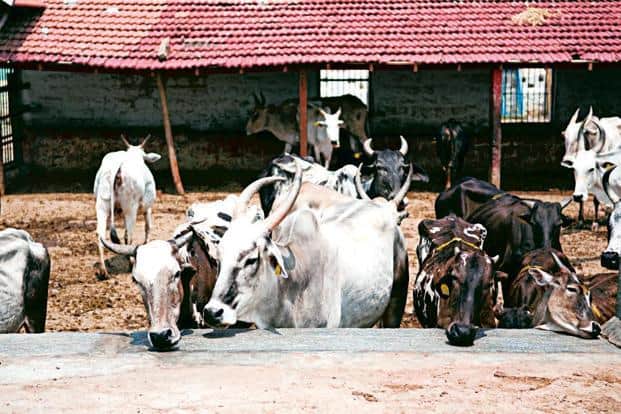 Updated: Sat, Jun 01 2013. 12 20 PM IST
The goshala is an hour outside Bangalore. Our auto bounces along over flyovers and underpasses. The calf lies at our feet serenely. We take a turn from the main highway and are on dusty village roads. Soon, we are entering the “Bangalore Gorakshan Shala”, which translates to “Bangalore Save the Cow Shelter”. It is 108 acres of prime Bangalore land that would be worth millions of dollars if developed. Instead it is overrun by bovines. 108 is an auspicious number in Hinduism. I doubt that the number of acres bought way back in the 1930s was a coincidence.
There is an arch at the entrance, almost as if we are entering a religious institution. A couple of men sit on the side, napping in their chairs. No one stops or questions us as we walk in, pushing a reluctant calf. Cows don’t like to be prodded and neither do calves. There is a reason that Taurus, the sign associated with the bull, is associated with being stubborn. A cow—or calf—likes to walk at its own pace.
Naidu pushes the calf and his cousin pulls it from the front. It takes the two of them to guide the calf into the space inside. There are about 400 calves sitting under the covered shed. Most are napping in the afternoon heat. Some bleat as we walk by. Some are standing and eating. Most are male calves that look like ours.
The goshala is divided into several areas, each with a few hundred cows in them. At the entrance is a large fenced area inside which are the healthiest animals: a mix of Holstein-Friesian cows, desi breeds and bulls. They stand there eating the hay that is spread all over the floor, and look up inquiringly as we walk by into the calves’ enclave. There are four other sections, one for desi breeds like the Gir and the Saahil that come from the north; there is another enclosure full of black buffaloes with curved horns. In the back are sick cows, with polio or foot-and-mouth disease. There is a gate beyond which, I am told, are the areas where dead cows are buried.
“Look, they even have a mouse,” marvels Naidu as we walk past the rabbit enclosure.
“Look over there! It’s a camel. Two camels. Actually, four,” says his cousin.
On the roofs of the sheds are thousands of doves.
“It costs us Rs.20 lakh a month to run the goshala,” says Kishenlalji Kothari, the secretary of the society, when I meet him later at his home. He reels off a long list of numbers on what it takes to run the goshala.
There are about 1,000 cows in the shelter and some 400 calves. Only about 50-60 of them are milking cows. The rest are abandoned cattle—left there by farmers who cannot keep them. Each calf is given a litre of milk a day that they buy from the milk trucks which stop at the goshala every day. Forty-five staff members take care of the animals. A husband and wife team is given Rs.10,000 as a monthly salary. They have a doctor on the staff and several on call from the local veterinary college. They buy 300kg of maize and wheat from local farmers to feed the cows. They spend Rs.1 lakh a month on just water.
“We treat these animals as family members,” says Kothari. “It is hard to convince non-vegetarians. They think we are just wasting money. But we don’t want to convince them.”
The society runs with contributions from its 500 members, of which 32 form the working committee. Elections are held every three years. Their annual budget is Rs.2.5 crore.
Is it because you are a Jain that you do this, I ask Kothari. He demurs. “Being Indians, we consider the cow a sacred animal. We solve their grievances, save them from butchers. In the whole world—not just India—do you know anyone who has not used a product from a cow?”
I think of my vegan friends who eschew all dairy products but I get his point about the usefulness of this animal.
The society wants to increase the number of animals to 10,000, says Kothari. They dream of using 50 of their acres for the goshala and then building hospitals, orphanages and old-age homes on the remaining land. The goal is that the goshala becomes not just self-sufficient but also supports other goshalas. They want to educate the farmers to value animals. “Everything I am is because of the blessing of the cow,” says Kothari. He challenges me to think of a goal that I want to attain. Pray to this animal and if you attain your goal, support us a little, he says. “Anyone who comes to the goshala and spends some time with these animals will get peace of mind.”
Naidu and I are not peaceful at the calves’ enclosure. We are distressed. Naidu holds the calf and looks around, wondering where to leave him. There is a vacant spot. Naidu leads the calf and quickly ties the rope to the pillar. A neighbouring calf comes forward and smells the new entrant inquiringly. Cows, they say, have a keen sense of smell. They can smell things miles away. But not their own cow dung perhaps. How else can they stand amid their dung?
The tied calf stands there uncertainly. The other animals look fairly healthy. There is the odd calf that is lying on the ground, gasping for breath, clearly sick. Blood is seeping out of another calf’s rear. But for the most part, the calves are standing, sitting, napping and bleating. They don’t look deprived or abused.
A huge truck filled with hay comes in. Two men begin to unload the hay. Naidu and I watch our calf uncertainly for a few minutes. It is still standing. It doesn’t bleat reproachfully at us. What do we do? Are we doing the right thing?
Decisively, we turn and walk away without looking back.

Shoba Narayan didn’t sleep that night after her visit to the goshala. This is the fourth column in the series.