Listening to M.S.’s Bhaja Govindam as you read this will improve the sensory experience. That– or Bhavayami Gopala Baalam.
Also, Mint has chosen a photo from their files, but below are my favorite MS photos. 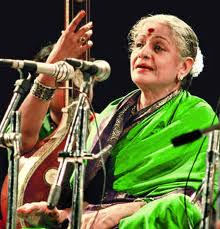 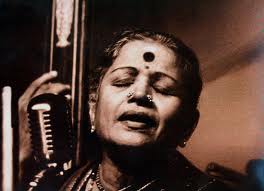 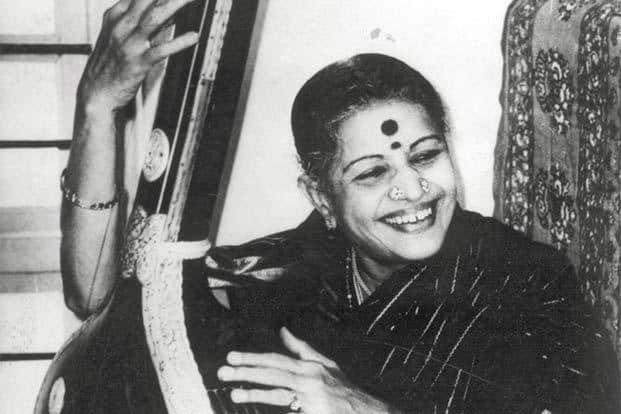 M.S. Subbulakshmi epitomized the Tamil Brahmin aesthetic. Photo: Hindustan Times
So Vidya Balan will play M.S. Subbulakshmi in Rajiv Menon’s biopic of the Carnatic legend? This is exciting news for Chennai’s music lovers. Chennai wakes up to M.S., as she is called. Her rendition of the Suprabhatam and Vishnu Sahasranamam (1,000 names of Vishnu) still remain the versions that are played at south Indian homes and temples in the morning. Her interpretations of classic Carnatic songs such as Thyagaraja’s Pancharatna Kritis (or Five Gems compositions), Annamacharya’s compositions, songs of Mirabai such as Hari Tum Haro, repeated endlessly after Gandhiji’s assassination; and popular Tamil songs such as Yaaro Ivar Yaaro—these are part of Chennai’s collective unconscious.
Then, there was the woman herself. If you grew up in Chennai and were marginally interested in Carnatic music, there was no escaping tales of M.S.
The late Morarji Desai wanted a south Indian woman artist or educator to be inducted into the Rajya Sabha. He asked one of his Tamil-speaking IAS officers to call the musician and make the offer. After some cordial persuasion, M.S. demurred, citing her husband, T. Sadasivam. “He is around me like a kavacham (armour). How can I leave him in Madras and come to Delhi?” she said in Tamil. “I can sing for an audience of a lakh of people but I wouldn’t know what to say to 50 MPs.” Later, she conferred with Kanchi Sankaracharya, her spiritual guru, about the offer. He in turn told her that she ought to do what her heart told her to.
She sang from the heart, this icon. Madurai Shanmukhavadivu Subbulakshmi, a devadasi known—quite wonderfully in this age of feminism—by her mother’s name, became second wife to the strict patriarchal freedom fighter, Sadasivam. She deferred to him entirely. He orchestrated her career and made her a national celebrity whom Jawaharlal Nehru called the “queen of song”.
Her music had the bhakti rasa that touched hearts. It was her voice that soothed millions after Gandhiji’s assassination. India saluted it with a Bharat Ratna, the first ever awarded to a singer. T.J.S George’s biography (MS: A Life in Music) captured much of her turbulent history, but missed many anecdotes from her daily life. For that, you had to be a music lover in Chennai during her time. Sooner or later, you would be drawn into her orbit.
There were some purists who thought that it was the magic of her persona, more than her music, that made her popular and carried her to Carnegie Hall. Critics said that her manodharma or free-form alapana wasn’t as imaginative as M.L. Vasanthakumari’s, her contemporary. Others said that her grip on classicism wasn’t as sure as D.K. Pattammal’s. She knew fewer songs; her Sanskrit pronunciation was good but not perfect. And who was she to be singing the Hanuman Chalisa in a south Indian accent? But these were quibbles that were swept away by her beauty, charisma, the humility she seemed to personify as she sang: the half-closed eyes, face turned upwards, palms together prayerfully. It was a classic M.S pose. Her devotion, however, was real. She lost herself in the music and pulled others into its transcendental depths with her.
In life, she was soft, humble and content. She ate Tamil vegetarian food, donated generously and lived simply, save for her shringara (beauty) and alankara (adornment).
A Carnatic musician and teacher, the late Meera Seshadri, lived in Kotturpuram, just a few streets away from where M.S. lived. She spoke about visiting “M.S. Amma” one day to find the great lady perfuming her hair with “sambrani” incense after an oil bath. The incense burner was on the mosaic floor with a wicker basket over it. Across the basket was M.S.’ luxuriant curly hair, absorbing the twisting smoke and its fragrance in the dim cool room.
For many, M.S. epitomized the Tamil Brahmin aesthetic: straight parting; slightly oiled hair pulled back into a braid or a chignon adorned with Madurai jasmine flowers; bright red bindi; Kanjeevaram silk saris in jewel tones with poetic names borrowed from nature such as peacock blue, onion skin pink, mango yellow, parrot green; star-shaped diamond earrings; the all-important diamond nose rings—a solitaire on one nostril, and a triumvirate on the other; at least two necklaces, including the long, hanging mangalsutra; bangles on both hands—a mixture of tingling glass bangles interspersed with gold ones; a simple plain blouse that matched the sari—none of the mirror-work or designer blouses, the blouse cut close to the neck without a deep back; the sari pallu worn around the neck; anklets; toe rings for sure; a heady fragrance from a combination of jasmine flowers, sandalwood oil moisturizer and herbal hair oil; and lips red from the betel leaf that is chewed after lunch (M.S. wore lipstick too). This sensuous aesthetic—can you imagine, not one of your senses is left unattended?—is what M.S. modelled. It is how Tamil Brahmin women of that era dressed.
Balan will do a killer impersonation, for sure, for she is a gifted actor. But hopefully she will go deeper. She is portraying not just a beloved national figure, she is portraying someone close to the heart of most Tamilians; a person who they possessively call “namma M.S. (our M.S)”.

Shoba Narayan aspires to M.S.’ sensual aesthetic, but for that, she’ll have to give up her trousers and wear only saris.
Also Read | Shoba’s previous Lounge columns