Memories are made of buttermilk for Mint Lounge

Memories are made of buttermilk for Mint Lounge

It is hot now in Bangalore, which, I guess, is what prompted this piece.

Memories are made of buttermilk 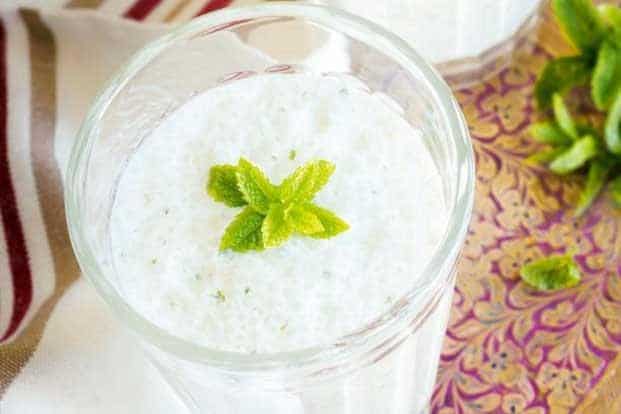 My first memory of buttermilk is warmth and darkness.  I must have been five or six years old.  Still confused by the mists of sleep, I walked into my grandmother’s kitchen, drawn by a comforting swishing sound.  My grandmother was sitting on the floor, her legs spread-eagled and resting on the wall.  Soft light filtered through the window in front of her.  In between her legs was a heavy mud pot that was held firmly in place by a coiled towel.  A tall wooden “mathu” or butter churner was inserted inside this pot.  Although I didn’t know it then, it was the older version of a blender.

I stumbled inside the cool kitchen.  My grandmother turned.  Her diamond nostrils glinted in the shaft of light.  Her beautiful face crinkled into a smile but she didn’t say anything—she was engrossed in her task.  Her hands held the two ends of a rope that was coiled around the butter churner.  They moved back and forth rhythmically.  My grandmother sat like a yogi, alert but relaxed.  I had seen her in this position many times.

Unbidden, I slipped under her hands that were level with her shoulder.  I rested against the C-shaped curve of her body, my back against her soft, squishy belly; my legs spread-eagled like hers; my hands flush against hers.  Together, we pulled the rope, back and forth, coaxing the milk into giving up its butter.  It wasn’t milk really.  It was the thick yogurt that she had collected for a couple of days.

The wooden churner was a marvel of engineering.  It was held in place by two simple pulleys, facing opposite directions.  The first was a U-shaped coil of rope that was tied to the window-grill permanently.  When we began the butter-churning process, we slipped the wooden churner in between this coil.  Then came the second coil of rope that we pulled from the other side.  The churner couldn’t touch the bottom of the pot because that would generate friction when we churned.  Instead, my grandmother placed it expertly so that the churner was a few inches above the bottom of the pot, held aloft by the pressure of her churning.

I loved sitting within my grandmother’s body, matching my arms to hers as we pulled the rope together.  I could smell the buttermilk and feel my grandmother’s breath on my nape.  She didn’t say a word but it was the closest that I came to feeling utterly secure and comfortable.  Some minutes later, we could see the heavy butter lumps begin forming.  My grandmother poured cold water into the mud pot.  We continued churning.  Within minutes, butter lumps floated on top.  Then we stopped.  My grandmother collected all the lumps together in her hands and tossed them together into a round ball.  I sat still and expectant, waiting for the best part.  Once my grandmom put the big round ball into a vessel filled with water, where it floated like those white planets that we drew in our geography book.  Then, she collected the smaller lumps of butter that were still floating inside, made a small ball and glanced at me.  Obediently, I opened my mouth.  In went the freshly churned butter.  It tasted of the saltiness of my grandmother’s hand, the sweetness of cow’s milk and the slight sourness of the yogurt cream that we collected.

Fast forward, a decade and my grandmother still made buttermilk, except with her trusty Braun “mixie,” that my uncle gifted her from the U.S. It made her churning a lot easier. She put thick yogurt into the blender, added ice water from the fridge, and pressed a switch. Five minutes of spirited whirring and the yogurt would foam on top. The bubbles were my grandmom’s cue. She added a little ice water and pressed the switch once again. Soon, lumps of butter would form. After that, it was the same ritual. She would collect the large lumps and toss them expertly with her palm into a large round ball. The dregs of butter went into my mouth. They still tasted like buttery heaven.

Every part of India uses buttermilk. In Kerala, we simply water it down, toss in a few fresh curry leaves and drink it as sambaram. In Tamil Nadu, Andhra Pradesh and Karnataka, buttermilk is spiced with ground-up green chilies, ginger, curry leaves, some asafetida and salt, all of which are pounded and added to the buttermilk. We call this majjige or neer-mor. Much of North India uses roasted cumin and mint leaves to spice their buttermilk or chaas, as it is called.  A combination of roasted and ground cumin, some salt, a dash of lemon juice, and pounded pudina or mint leaves, are added to the buttermilk for flavor. This watery, delicious and light drink is excellent for digestion and cooling the body. Punjab, of course, has its famous lassis, made with thick buttermilk blended with fruits like mango. Mango lassi is available all over the world at Indian restaurants.  Bengal, I think, doesn’t have buttermilk.  They prefer their mishti dahi, not the watered down version.

The beauty of buttermilk is its egalitarian nature. No matter how rich or poor, all of India consumes this drink. Down the road from where I live is a pushcart vendor. All she has on her cart is a red earthen pot filled with buttermilk that she sells to auto drivers, bicycle messengers, and anyone who needs a cool drink on a hot day.

As for me, I prefer buttermilk to yogurt just as I prefer light black coffee to thick cappuccino. If I had a choice, I would drink my grandmother’s buttermilk but she is dead now. I still have her wooden churner though. Every now and then, particularly on hot summer days, I think of bringing it out and setting it up with two coils of ropes, just as it was in my grandmother’s kitchen.