On Board the Bombay Express

PDF of On Board the Bombay Express: A Rolling Feast of India NYTimes

THE most important thing when traveling by train in India is not whether you have a seat in first class (more comfortable) or second class (more congenial), not whether you have confirmed tickets or even your destination. The most important thing is the size of your neighbor’s tiffin carrier, the Indian lunchbox. If you are lucky, you will be seated near a generous Marwari matron whose way of making your acquaintance is to hand you a hot roti stuffed with potato saag.

I was 14 when this happened to me, and I still remember biting into the soft, ghee-stained roti bread and feeling the explosion of spices in my mouth as I encountered cumin, cilantro, ginger, green chilies, pungent onions and finally — like a sigh — a comfortingly soft potato. It was dawn. The train whistled mournfully as it click-clacked its way through the misty countryside. A cool breeze wafted through the open window and teased the curls behind my ear. Fragrant turmeric-yellow saag dribbled from the corner of my mouth. A perfect symphony for the senses.

It was 1981, and my family and I were taking the Bombay Express from Madras to Bombay (now officially called Chennai and Mumbai) for our annual summer vacation, a trip of about 30 hours. Across from me, my parents, still faint and groggy from the effort of packing and bundling us onto the train, were nodding off. Beside me, my 13-year-old pest of a brother was elbowing for the window seat, which I had no intention of relinquishing. I turned toward the Marwari matron hopefully. She smiled as she opened another container. In a trance, I went to her.

Marwaris are from the desert state of Rajasthan, and Marwari women are known to be fantastic cooks. They are also known to be generous to a fault, which makes them dream companions for a long train journey. Enterprising Gujaratis, on the other hand, were more businesslike, which meant that I had to ingratiate myself to gain access to their divine kadi (sweet-and-sour buttermilk soup). A boisterous Punjabi family was always good for card games interspersed with hearty rajma (spiced kidney beans). Intellectual Bengalis from Calcutta, now called Kolkata, were a challenge. I had to match wits with them before they would share their luscious rosogollas (sweet cheese balls) and sandesh (milk and sugar squares) with me. I didn’t bother with the South Indians, being one myself.

It was this glorious home-cooked food that made the train journeys of my childhood memorable. My uncle in Bangalore was a few hours away by the Lal Bagh (Red Garden) Express; my grandparents were an overnight journey away on the Blue Mountain Express. We got on the train in the evening and later climbed into the sleeper berths. We woke up to the smiling faces of my grandparents, who met the train with flasks of hot coffee and crisp vadas (lentil doughnuts) fried right on the platform.

Unlike these short overnight journeys, the trip from Madras to Bombay was satisfyingly long. The train left Madras at dawn and reached Bombay the following morning. My brother and I had all day and all night in the train to stake out corners, play card games, make friends with the other children, run riot through the compartment, annoy ticket inspectors by singing to the rhythm of the train, and most important, partake of our neighbors’ tiffin carriers.

The tiffin carrier is a simple, yet wonderful Indian invention. Several cylindrical stainless-steel containers are stacked and held together with a metal fastener that serves as a handle. Although the word tiffin means light food, the tiffin carrier can hold anything. The one I took daily to school had two containers — the bottom one for a hearty rice dish and the top one, a vegetable.

If my school lunchbox with its measly two containers was a Manhattan town house, the Marwari matron’s tiffin carrier was the Empire State Building, with more than a dozen stainless-steel containers. She opened each container at a strategic point in our journey. At dawn, we had the roti and potato saag. At 10 a.m., a snack of crisp kakda wafers speckled with pepper. For lunch, a bounty of stuffed parathas (flatbreads filled with mashed potatoes, spinach, radishes, paneer-cheese and other such goodies).

My mother had brought lunch in a tiffin carrier, too — petal-soft idlis wrapped in banana leaves and slathered with coconut chutney. Idlis are steamed dumplings made from a rice and lentil batter that is allowed to ferment for a day. American idlis are hard and don’t possess a tangy sourdough taste. To eat the authentic spongy idli in all its glory, you have to go to Madras and get invited to someone’s home for breakfast.

My mother always made idlis for train travel because, among their other virtues, they keep well. The Marwari boys scooped hers up with gusto and wolfed them down with gentle, satisfied grunts.

As the sun climbed high in the sky, the train rolled into the arid plains of Andhra Pradesh. I began salivating for mangoes. The moment the train stopped at Renigunta Station, passengers jumped off on an urgent errand. My father and I disdained the train-side hawkers who carried baskets of high-priced, inferior mangoes, and sprinted toward the stalls on either side of the platform. About a dozen different types of mangoes were piled high: custardy Mulgoas, robust sweet-sour Alphonsos, ultrajuicy Banganapallis, parrot-beaked Bangaloras, and finally, the Rasalu, the king of mangoes in terms of sweetness.

A few minutes of intense bargaining followed, fueled by the fact that the train would leave the station at any minute. Just as the whistle blew and the guard waved his green flag, my father and I jumped back on the train carrying armloads of juicy mangoes, which tasted even better for the adrenaline and tension that surrounded their purchase. My brother and I sat at the open door of the train as it rumbled slowly through the Deccan Plateau, slurping mangoes and waving at villagers. I threw the mango seeds into opportune clearings and imagined entire mango orchards rising behind me.

Almost every station in India sells a regional specialty that causes passengers to dart on and off of trains. My parents have awakened me at 3 a.m. just to taste the hot milk at Erode Station in Tamil Nadu. Anyone passing by Nagpur Station is entreated to buy its glorious oranges. Allahabad, home to Hinduism and the river Ganges, is famous for its guavas; Agra, where the Taj Mahal stands, has wonderful pedas (chewy squares of candy made with milk). Shimla, called queen of the hill stations by the British, was known for its apples. Kerala, where my father spent his childhood and still leaves his heart, has the best plantain fritters, fried in coconut oil on the platform.

As if the stations weren’t distraction enough, a steady stream of vendors brought food onto the train. Our midafternoon card games were almost always interrupted by teenage boys in khaki shorts selling coffee. ”Kapi, kapi, kapi,” they would call, pausing to check out who had the best hand of cards. Frequently, the person with the best hand ordered a round of coffee for the group, inadvertently giving away his advantage.

If we were lucky enough to stop at Andhra Pradesh at dinnertime, my parents would buy us aromatic biriyanis. Andhra cooks make the best biriyanis in the world. They combine Basmati rice, succulent meats marinated in a yogurt-mint sauce with ginger, garlic, green chilies and a long list of ground roasted spices. These ingredients are slow-cooked in a vessel with a lid sealed on with dough so that the flavors don’t escape. Being Brahmins and therefore vegetarians, my parents encouraged us to eat vegetable biriyanis. The only times I almost strayed are when I encountered the mouth-watering smell of lamb biriyanis on trains.

Having lived in the United States for 15 years, I made my most recent annual visit to India a few months ago. My father considerately booked us on the Shatabdi (Century) Express from Madras to Bangalore. My parents were thrilled to be showing off the Shatabdi Express. ”It is just like your U.S. airplanes,” my mother exclaimed. Indeed it was. Fully air-conditioned with reclining seats, this super-fast train is frequented by business people and foreigners. It leaves on time and doesn’t make random stops. The sealed windows and air-conditioning keep away heat, dust and stray vendors. As soon as we got on, two plastic-gloved attendants gave us bottled water, newspapers and a hot breakfast served from a trolley. In a scant four hours, we had reached Bangalore.

Yes, the train was clean, punctual and efficient, an entirely new concept for India, which was why my parents loved it. But I didn’t want convenient and efficient. Although I appreciated the air-conditioning, I wanted color, characters and memories. For that, I should have taken my daughter, who accompanied me to India this year, on the Bombay Express. Second class.

Photos: POTLUCK PICNICS — On trains like the one above, in Bombay in 1971, passengers often shared homemade specialties and bought local treats at each stop. Left, an Indian train station in 1967. (Press Information Bureau, Government of India) 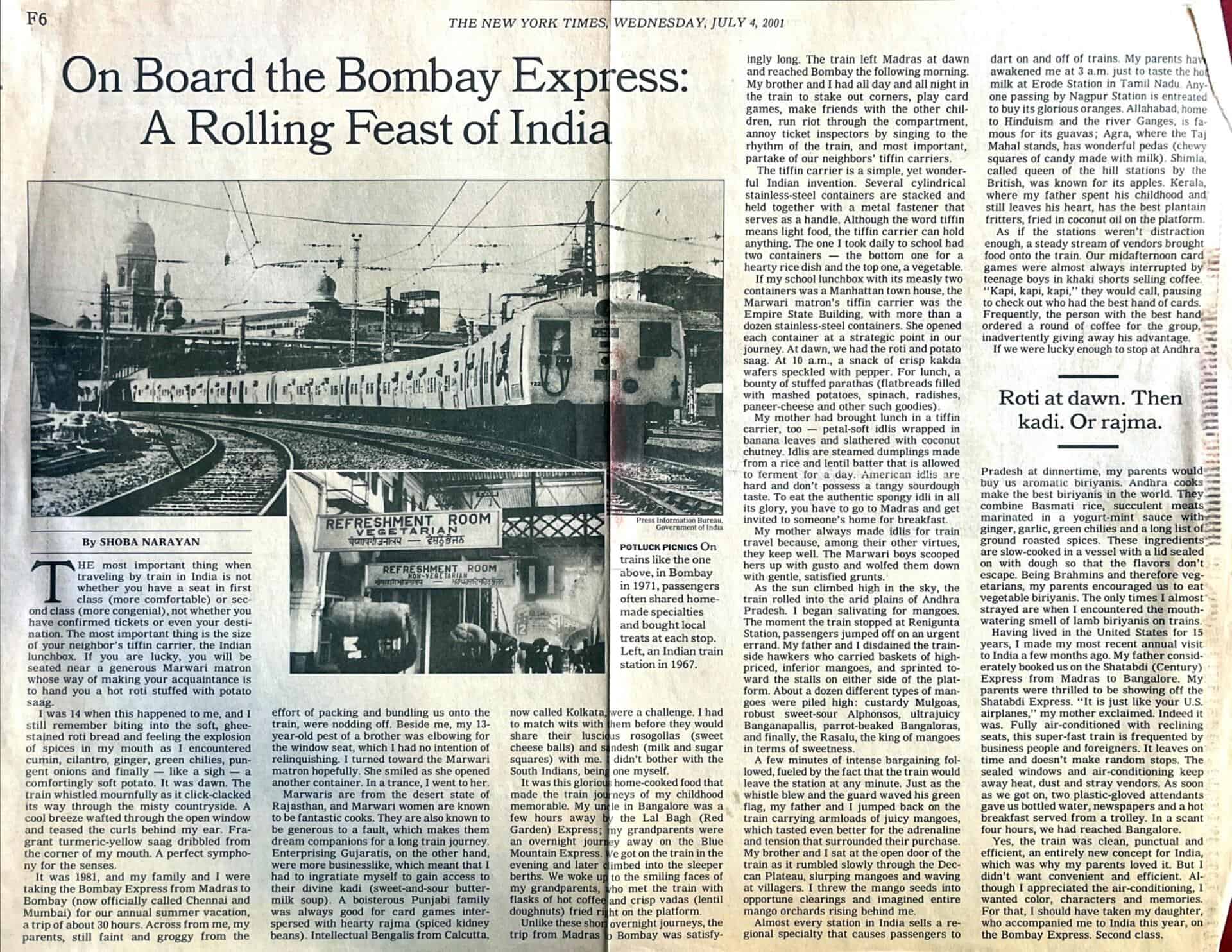