Profile of Puneet Chhatwal: CEO of The Taj hotels

Profile of Puneet Chhatwal: CEO of The Taj hotels

Journalists love scoops, and this was a good one— first interview given to a journalist and one in which he spoke very candidly.  And I learned a brand I didn’t know: Cove & Co.

In his first media interaction since taking charge, Puneet Chhatwal. the CEO and MD of Indian Hotel Co. talks about the future of hospitality, gender balance, and learning different languages

Can a hotel brand be both iconic and hugely profitable, I ask Puneet Chhatwal.

“Why not?” he asks back. “We are already iconic. Now we just need to be profitable.” The 54-year-old took charge as the CEO and managing director of Indian Hotels Co. Ltd (IHCL), which runs the Taj chain of hotels, in November and is charting the next phase of growth for one of India’s oldest hospitality brands.

The company was indeed profitable just a little more than a decade ago, “swimming in cash”, as Chhatwal puts it. But then came the global economic crisis, in September 2008, followed by the terrorist attacks in Mumbai two months later, a “double whammy” for the hospitality industry. It didn’t help that the Taj group was in the middle of global acquisitions at the time—the right strategy at the wrong time, Chhatwal admits.

We are meeting over a meal at the Golden Dragon restaurant at The Taj Mahal Palace hotel in downtown Mumbai, arguably India’s most iconic hotel. Chhatwal is breaking bread, or, in this case, dumplings with me.

He is dressed impeccably in a formal Cove & Co. double-breasted suit. His socks match the colour of his blue pinstripe suit. He gets his shirts tailored in Egypt because he likes their cotton. His ties and pocket square are either Hemley or Hermes; his accessories, mostly Montblanc. This attention to detail and affinity to a German style comes from the 28 years spent outside India, mostly in Germany. He speaks German as fluently as he speaks English, Hindi or Punjabi. His French and Italian are passable, he says. “If you are as fluent in German as I am, you struggle with your French and English.”

Learning new languages was a way for Chhatwal, born and brought up in a Punjabi family in Delhi, to be different. It also took him places: first, to study in France (an MBA in hospitality from the Essec Business School in 1991) and, later, to work in Germany, initially for The Rezidor Hotel Group—Carlson Hotels Worldwide, and later Steigenberger Hotels AG–Deutsche Hospitality, where he was CEO and board member till he got the IHCL job. Returning to India had not been on the cards till then. “Honestly, I would not have returned for any other job or company,” says Chhatwal.

He did return, however, for three reasons: He had reached a plateau at his previous job, he was “blown away” by Tata Sons’ chairman N. Chandrasekaran, and he wanted to take care of his octogenarian mother, says the man who carries his late grandmother’s photo in his wallet. 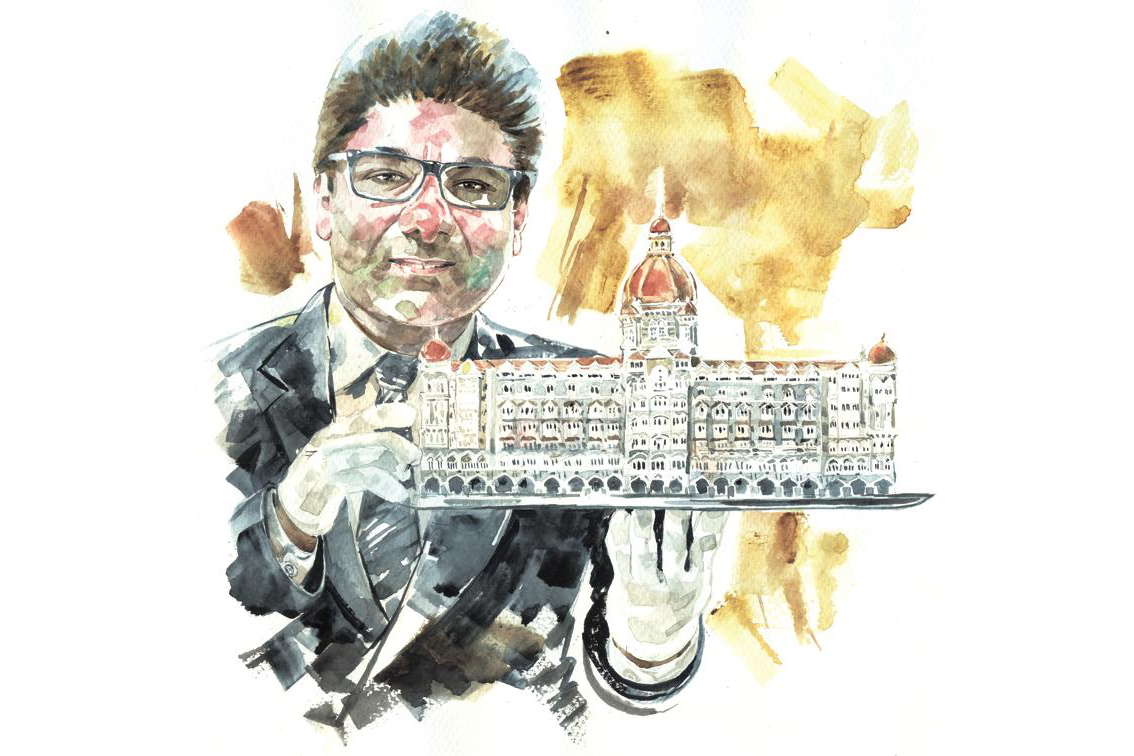 Chhatwal’s manner is a mix of the extrovert friendliness of his Punjabi roots and European formality. Compared with his predecessors, or peers in the hospitality world, Chhatwal speaks his mind with rare candour. He wants to preserve the core values of the group, the so-called “Tajness”, and stimulate progress. This involves a transformation in hospitality culture, bringing “West to the East”, which Chhatwal acknowledges has been met with what he calls “silent resistance”. But he believes in getting his team to buy into his vision, not bulldozing his way through.

One of his first actions after taking charge was to call for a business conference, not just for the general managers of the chain of hotels, but the owners and partners as well. “It seemed like the most normal thing to do but it was the first time this had happened in 115 years,” he says. The feedback was excellent. “People said, ‘Oh wow, we were never so transparent.’ You had owners collaborating, developing synergies, reimagining.”

Chhatwal has also identified 35 people for his top leadership team, a size that can be difficult to manage. “But you also get the wisdom of the crowd. The higher the majority, the less the error,” says Chhatwal. “Instead of five or six ambassadors of change, we have 35. And they will facilitate more change makers, so progress will be faster.”

This clarity of vision, he hopes, will see him through, managing a hospitality behemoth that has a market capitalization of more than Rs16,000 crore and more than 145 hotels across four continents. In just about six months, Chhattwal has embraced his role with a slew of acronyms, abbreviations and initiatives, some of which do seem forced. Taj, he says, stands for Trust, Awareness and Joy. His “Aspiration 2022” lays out plans to forge ahead with a three-pronged strategy that includes 3Rs: restructure, reimagine, and re-engineer. Beyond the management-speak and presentation-friendly acronyms though, the target, in the near term, is to strengthen the Taj brand, which will bring in most of the revenue.

Chhatwal cites the example of the hotel we are sitting in. Its annual revenue of $80 million (around Rs542 crore), he says, is currently more than what “30 or 40 Ginger hotels would bring it”.

In the long term, however, he expects to scale up the budget hotel Ginger brand, from 40 hotels to “200, 300 or 400 hotels”. For, industry trends forecast that the sector which the Ginger hotels occupy will experience the most growth in the long term.

So, though he wants to raise the revenue of The Taj Mahal Palace to $100 million in two years, he is clear that eventually the revenue will come from mid-market and upscale properties—“not even the upper upscale, deluxe or luxury” properties, he explains, diving fluidly into the sector-speak that slices and dices the hotels business.

Chhatwal’s plans point to the importance of the Ginger hotels, and its CEO Deepika Rao, within the group. Rao is currently the only woman CEO in the IHCL group firms. Announcing her appointment last month in a statement, Chhatwal highlighted the importance of gender balance in the company. Women account for just under 16% of IHCL’s workforce, not as abysmal a ratio as some other Tata group companies but not yet enough to create a balance.

Chhatwal is pushing gender balance in other ways too. The group announced two new programmes to reiterate its commitment to being an equal opportunity employer. One is to give a higher referral amount to employees who refer a woman candidate and the other is to extend maternity benefits to include reimbursements of medical expenses incurred in IVF and surrogacy.

During his rare downtime, Chhatwal listens to all kinds of music, plays tennis, enjoys going to the spa, and cooking. Bath, he says, is the best spa city in Europe. “I wear my chef’s jacket and cook for 20-30 people,” he says. These people are mostly old friends and family.–

His other priorities include streamlining the economics of the group, where the group should spend and where it should stop spending, whether to build or buy. Building is painstaking and takes time. Buying is tricky. “In a customer-centric business like hospitality, where perceptions matter, developing a clearly defined brandscape is key,” says Chhatwal.

“You cannot be the Indian Hotels Company and confuse it with the brand ego of Taj and call it Taj Vivanta and Taj Gateway,” he says. “Each brand has to stand on its feet.”

Some of the rebranding will be simple, ensuring there is no “cannibalization” within the group. Vivanta by Taj Yeshwantpur in Bengaluru, for example, has become Taj Yeshwantpur.

Some of the traditional practices will go. “The arati and thali and tikka is archaic,” he says. “Guests these days enjoy the splash of water from an elephant more than sitting on an elephant.” He cites other examples. All Indian hotels still have blue tiles in their swimming pools. The W in Doha has black tiles, while the Missoni in Kuwait has colourful tiles. Similarly, the beige staff uniforms of his hotels feel outdated. “The ladies are all in beige. You look beige, you are dressed in beige. It pulls you down. We need a modern twist on tradition,” he says, before complimenting The Oberoi Group on their colourful uniforms.

Chhatwal is aware that his forthright manner is unusual for India, his industry, and, particularly, the group he heads, where employees have worked for decades. He is aware that change within the group, even if it is about a swimming pool, will be like swimming upstream. “There was silent resistance because people listened to my views and said, he has come to kill Tajness. No, we take Tajness to a whole different level. We give an international polish to it,” says Chhatwal.

We experience an example right there at the table, when he quietly instructs an overzealous waiter to give us time between serving the dishes.

He wants to simplify the marketing material, the verbose thank you notes. “The latest in our marketing campaign says 25% off BAR. Now BAR is Best Available Rate. But to most people, it is a place where you go to have a drink. We need to simplify our written material. Keep emails short.”

He lives the dictum. His staff say that this self-confessed workaholic responds to emails at all hours of the night.

One casualty has been his marriage. Chhatwal got divorced in 2014 after 22 years. “It was a classic case where one partner gets ahead and the other gets left behind,” he says. “I tried really hard. I tried to keep it together for over 10 years.” His son Karan, 25, is a producer in London and daughter Naomi, 21, will be graduating from the University of Bath in July.

Being extremely task-focused is his biggest flaw, admits Chhatwal. “I come straight to the point, don’t worry about political correctness, and perhaps I can be too blunt,” he says. “Here in India, it is more important to understand what is not being said than what is being said. I don’t get that.”

He may be blunt but he tries hard to be inclusive, he says. He may be task-focused but he does see the big picture. He dislikes fuss but he likes service. Walking this tightrope is a fine balance. Will Chhatwal make it across? He seems unconcerned. “If you take risks, you make mistakes,” he acknowledges. “But I never make the same mistake twice.”

With that, the man who plans to polish, clarify and make specific that airy-fairy thing that his predecessor called Tajness gets up, bids goodbye and goes off to embrace his new city, country and career.