I have a somewhat unusual method of rating hotels. I call it the filch factor. If I feel like filching something from the hotel, I consider it worthy of my esteem. I hasten to add that I haven’t actually filched anything from hotels (okay, maybe some toiletries) but the filch factor is what makes a hotel memorable in my mind. I still remember the crisp asparagus-green linen napkins at the Ritz-Carlton in Santiago de Chile; the spa robe at the Shanti Ananda Mauritius; the delicate paper-thin china at the Four Seasons Resort Bali; and the purple velvet pillow that I desperately wanted to smuggle out from the W Seattle. I am happy to announce that the salt-and-pepper shaker at the Taj Exotica in Maldives joins this not-so-illustrious list. 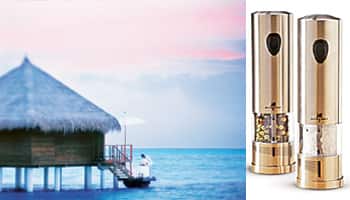 I spent Christmas in the Maldives a couple of years ago. It was sort of weird for someone who buys into the whole “white Christmas” dream. The Maldives is a toy country; a group of atolls really (which is geography-speak for tiny islands) speckled across the Indian Ocean. The capital, Malé, has around 70,000 people and is about the size of say, Greater Kailash. The people are mostly Muslim but progressive and the streets are orderly and clean. Most tourists however don’t even touch Malé. They get into a speedboat or seaplane and go directly to their resort.

There are resorts aplenty here, catering to every budget, lifestyle and language. Some are 98% Italian, others are favoured by the Brits or Germans and some are diving havens. The rates too swing wildly. Paradise Island charges $275 (about Rs11,000) a night even during Christmas time. At the other end are the Soneva Fushi and Gili, the Taj Exotica, the One and Only Reethi Rah and the Four Seasons, all of which charge over $1500 per night during Christmas season.

I stayed at the Taj Exotica because some European friends who were to join us insisted on it. I wanted to stay at the Soneva Fushi but neither the Fushi nor its sister property, the Soneva Gili, was kid-friendly. Or so I heard.

The Exotica charges outrageously high prices during Christmas. But after I spent a few days there, I could sort of understand why. Or maybe it was just the white sand, the lulling ocean, and the general feeling of well-being that warped my mind. I am not justifying anything here but consider: every single thing in the resort was imported. The Frette linens came from Europe; the organic tea bags, from the Seattle Tea Company; the Punch coffee, from Papua New Guinea; the jams, from Tasmania; the produce, from Australia; the china, from England and the wine glasses, from Germany. Getting the best stuff from all over the world is what luxury hotels do, of course, but most luxury hotels are not set in a tiny island in the middle of nowhere.

I asked our waiter what they would do if the Riedel glasses broke or if the ship carrying Tasmanian jams was cancelled. He gave a strained smile and said that their current watermelon crisis was an example. The watermelons hadn’t arrived from Australia and so fresh watermelon juice had to be taken off the breakfast menu. They could only offer carrot, papaya, orange and apple. How about your salt-and-pepper shaker, I parried. Can you offer me that? 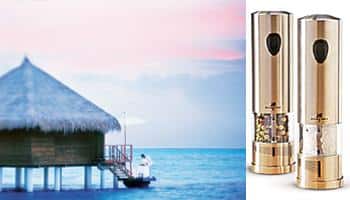 Okay, after all this build-up, I suppose I had better tell you about the darn thing. It was built like your stainless steel salt-and-pepper shakers made by Magppie design. No big deal: clean lines and a stainless steel body with a glass middle where you could actually see the pepper and salt that you were going to shake onto your food. The difference was that these shakers weren’t manual; they were battery operated. You pressed a switch and a light shone down on your plate. There was a whirring noise like an “Open Sesame” door opening and lo and behold, your pepper or salt magically sprinkled on the food.

I went to the gift shop to buy it but it wasn’t available. And contrary to what you might think, I didn’t filch it. It is available at Sur La Table (www.surlatable.com) for $99.95 each. It’s the Peugeot Elis Electric salt-and-pepper mill. If you have one that you would like to gift or donate, consider me.

We enjoyed some great wines in the Maldives. The bar at the Exotica had a nice tasting room and a wine list, which, while pricey, would put a London restaurant to shame. When I playfully asked for the Petrus, the sommelier told us that he had just sold it to the neighbouring table. Apparently, the English gentleman who was entertaining a large party had asked for a Burgundy. When told that they were out of that particular Burgundy, he said, “Oh, then bring me the Petrus instead.” The sommelier still seemed stunned by the whole encounter. They were selling the Petrus for $2500, he said, and the original Burgundy that the gentleman had asked for was a mere $200. Such are the ways and vagaries of the super-rich, I guess. And now, they probably had to wait for the next ship from France for their next shipment of Petrus.

Shoba Narayan did not have a Petrus in Maldives. She did not buy the salt-and-pepper shaker from Sur La Table either. Not yet anyway.

Write to Shoba at [email protected]