The nature community in Bangalore

The nature community in Bangalore

Bangalore Talkies: About the wildlife community in this city

If you like spiders, you may want to be at the Sankey Forest Campus in Malleshwaram on May 22nd at 10:30 am. That is when Karthikeyan S., or Karthik as he is called is releasing his book called “Explore Spiders of India.”

Published by Ecoedu.in, the event promises to be packed with nature lovers because Karthik is a well-respected well-liked person (and the two don’t necessarily go together). Consider the last few entries on his blog, wildwanderer.com. They are about giant water bugs, barnacles, scorpions, jellyfish and centipedes. For his book though, he chose spiders. “The need to popularise spiders and their importance among a larger audience prompted me to consider spiders for this book,” says Karthik.

If you are a nature buff, Bangalore is a great place to be. Its climate allows people to do the one thing that is needed to engage with nature: be outside. When I go to Delhi or Mumbai, I often wish that there was a primer for nature activities or folks I could connect with. Here then is one such primer for Bangalore.

(Disclosure: in this article– which is neither comprehensive nor entirely without bias– are some friends and acquaintances.)

As an entry point, get on Telegram the app. Join the group called Bangalore Wildlife Friends. You will find folks with broad and deep expertise. For example Shyamal L. is one of India’s top contributors to wildlife for Wikipedia. Seshadri K.S. is a frog expert. Sunil Kumar M. is an ant-lover who co-authored a book called, “On a Trail with Ants: A Handbook of the Ants of Peninsular India. T. S. Srinivasa knows Sanskrit and also trees. He has written a book called “Discover Garden Climbers,” also available on ecoedu.in. The Bangalore Butterfly Club has its own group online.

To meet the real “Daads” or gurus in the nature community, join the long-running “nature outing” group that meets in Lalbagh on the second Sunday of every month at around 8 a.m. If you are lucky, you will meet experts like Dr. S. Subramanya and Dr. M.B. Krishna who will point out ferns, fungi, figs and flowers, opening up worlds that you didn’t know existed. Lalbagh is a good place for nature folks, as is Koshy’s Cafe. Prem Koshy himself is a snake catcher, who like me, is fascinated by these ancient reptiles that are part of the creation myths of pretty much every civilization.

Wildlife isn’t a silo of course. It is also a route to meet some terrific people. Usha Ramaiah, now 80, for instance, was the first woman in Karnataka to scale the Himalayas. She is now a birder. Hayath Mohammed takes amazing macro shots of insects. Sugandhi Gadadhar, who just won a National Geographic grant and her husband, Rana Belur make films on bears, otters, and rivers. Rohit and Kalyan Varma’s web-zine, Nature in Focus has beautifully laid-out visual stories on zombie fungi or bar-hearded geese. Nirupa Rao’s illustrations of the magnificent trees of the Western Ghats bring them to tenuous life on the pages of her book, “Pillars of Life.”

Some in the community expand their interests. Priya Singh, an independent researcher with an expertise in wild canids (wild dogs) has become a moth expert as well. Interesting tangents emerge. Wildlife conservationist Rickey Key just won his second Grammy. He inhabits the worlds of art, culture, wildlife and music. Arguably one of the best wildlife film-making companies in the world, Felis Films, is based here in Bangalore. Its founder, Sandesh Kadur grew up cycling around South Bangalore. Photographer Ramki Sreenivasan co-founded Conservation India magazine. If you think you are “into” conservation, read filmmaker Shekar Dattatri’s brilliant article in conservationindia.org called “New to Conservation? Read this.”

India’s finest patron of nature, wildlife and conservation, Rohini Nilekani, makes her home here. Quietly and systematically, she has funded an array of ventures, small and large that touch pretty much every species. Trees, birds, black panthers and water ecosystems seem to resonate with her.

To me, philanthropy towards nature is perhaps the most far-reaching and visionary way to spend your money given that climate change is going to be the buzzword for the next century.

One of the things I do is called Bird Podcast. The producer for this, Ulhas Anand has connections to many aspects of wildlife here in Bangalore, ranging from the North Bangalore Birding Group that I am part of, to the Valley School birding group. Ulhas was named after pioneering conservation biologist and tiger expert, K. Ullas Karanth– different spelling, I know. But it just goes to show how Bangaloreans think. Imagine naming your child after a wildlife expert rather than a run-of-the-mill film star or politician. Today, Dr. Karanth’s daughter, Krithi runs the Center for Wildlife Studies with its ambitious goal of “rewilding India.”

There are two qualities that seem to differentiate wildlife folks. One is a certain self-sufficiency and contentment with solitude in nature. The second is a quiet willingness to share.

Now that you have the names of people and places in Bangalore wildlife, why not reach out and connect with us the next time you are here in this fair city. 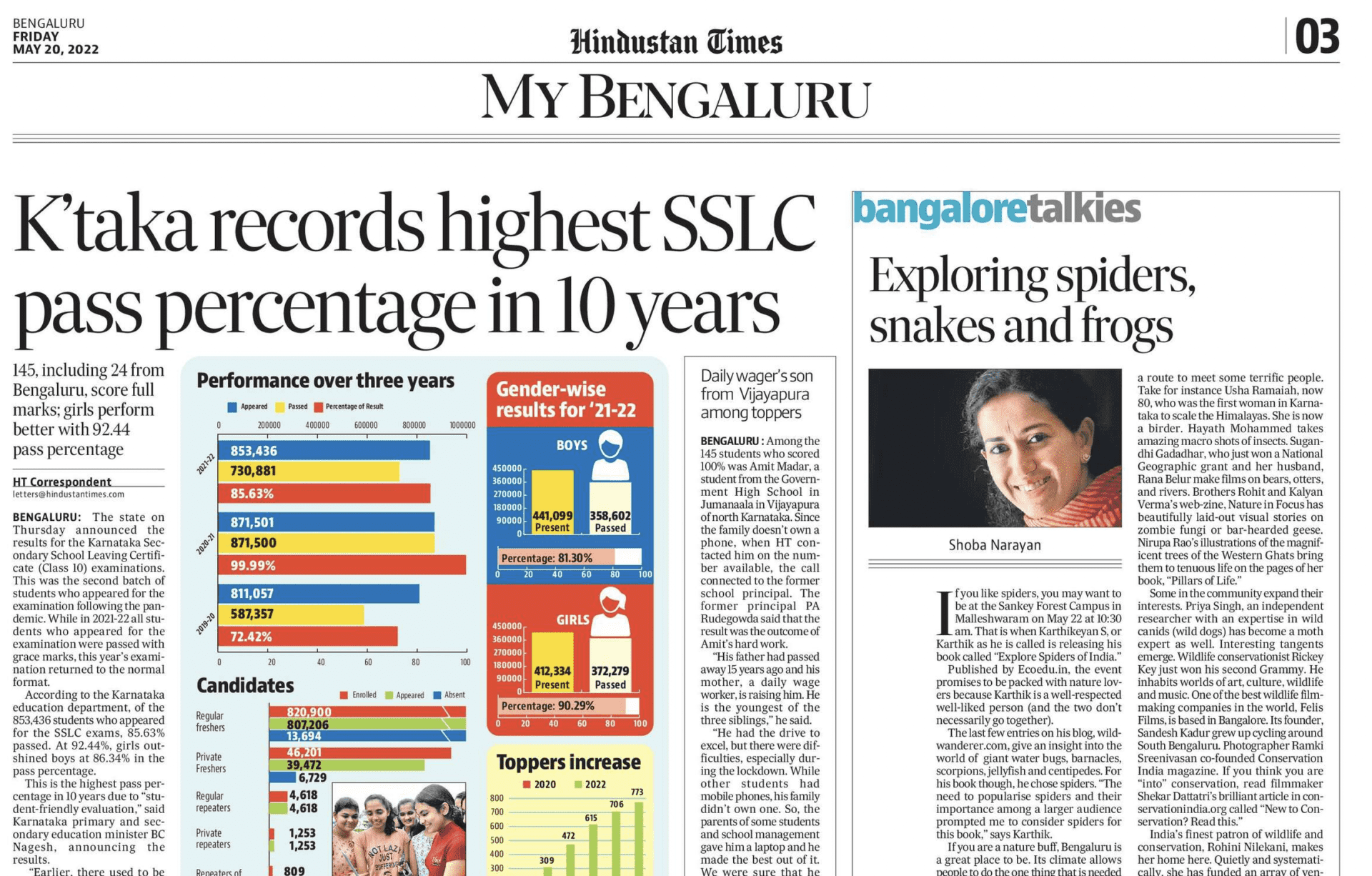