I have to admit, I hadn’t heard of the site, The Nervous Breakdown till my teenage daughter told me that they were the “coolest.”
When they approached me to do a TNB Self Interview, I thought it was a cool editorial idea.  Check out the email from Jackie, my publicist.

“Hi Shoba, the literary website The Nervous Breakdown is interested in having you conduct a “self-interview,” in which you answer questions you’ve always wanted to be asked but haven’t been.”

It is actually a very cool idea.  For me, I decided that instead of interviewing ‘me’ I would interview my cow.  I also decided that I would channel an opinionated somewhat self-absorbed character for the cow– the opposite of the benevolent generous maternal cow stereotype that is common in India.  Sort of like if Whoopi Goldberg played the cow.
Here is the result. 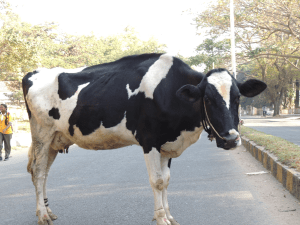 How do you feel now that the book is out?
Like a cow jumped over the moon. Like I have landed on pesticide-free virgin grass, which for a cow like me, is bovine heaven. After all, there aren’t too many books written about cows. The Milk Lady of Bangalore may have my mistress in the title but it is really about me: Ananda Lakshmi a.k.a. Blissful Lakshmi a.k.a. Blissful Goddess of Wealth a.k.a AL. You can call me Al.
So take that, Marley, Katie, Sophy, Oogy and all you dog heroes. This is my Moo to your Woof.
Were you nervous through the writing of the book?
Yes I was. Every morning, when Shoba came to collect milk, I could tell just from looking at her whether the previous day was a bad writing day or not. Humans keep blabbing on about “bad hair days.” But Shoba’s bad writing day was reflected, not in her hair or eyes—which are supposed to be the windows of the soul (what a bunch of crock)—but in her gait and stance. Us cows can tell a person’s mood from the way she walks.
Just from the way Shoba walked out of her building, I could tell if she was stressed out or not. Based on this, I infused my milk with calming hormones that made her feel good. So in a sense, you could say that I, AL, wrote the book. I was the muse and the milk-giver. Shoba is a mere scribe.
Woah! That’s a bit much, don’t you think? I wonder how Shoba feels about that last statement of yours?
Shoba works hard, poor dear. But she really has no clue.
Now don’t be a tattletale and tell her what I really think of her, OK?
She is a bit ditzy and thinks that just because she named me, she owns me. Little does she realize that it was the other way around. She paid for the privilege of getting to know me.
What was your favorite part of the book?
I really love the bit where they bargain hard with my previous owner, Reddy, to buy me. Now Reddy was slick, shrewd, and tight-fisted. When Sarala and Shoba showed up at Reddy’s farm, all of us cows in there were hoping to get bought. But I was the lucky one, probably because I am the most beautiful, intelligent, marvelous, and best cow in the herd. The rest, as they say, is history.
What was your least favorite part of the book?
Well now, that’s a tricky question. My publicist tells me that I should mention the section where my son was taken away from me as my least favorite part. Because you see, we cows have an image to keep. Everyone thinks of us as motherly. We are viewed as benevolent goddesses all over the world, or at least all over India. If only you guys knew what goes on amongst us. The backbiting, the petty rivalries, the gossip, the hypocrisy. Would you believe—the other cows think that I have become too big for my hooves ever since the book came out?
So you don’t miss your son who was taken away from you?
Sure I do. But kids grow up. They leave home. Their karma is their own. They choose their destiny. But enough about my kids. Getting back to me—what were you saying?
What’s in the future for you?
Well, like I said, my thought waves are really strong. I influenced Shoba to write about me, I influenced Reddy to sell me, I influenced Sarala to love me. Next on my list is Donald Trump. He eats burgers for a living, so you can imagine my views are about him. Through my thought waves, I am influencing him to turn vegetarian and get off Twitter. The latter is harder. I am also influencing someone to make a movie about me. I don’t want Harvey Weinstein anymore. Perhaps Steven Spielberg could do a movie with a cow as a superhero. Wouldn’t that be nice?
Favorite food?
Grass, of course. Not weed.
Beauty ritual?
I sleep under the sun. That’s it. We have a bovine version of Botox where we lick each other‘s faces. But I don’t much care for that.
Favorite drink?
Reddy once poured me a beer by accident. But mostly I drink water.
Favorite activity?
Chewing the cud.
Lastly, what’s on your bucket list?
So many things.
To walk the red carpet during the Oscars.
To Boo (or Moo in my case) during the next State of the Union speech. To ring the opening bell on the New York Stock Exchange.
To run across the stadium during the Super Bowl.
So many dreams.
Thanks a lot. Have a nice life.
You too.
__________________________ Ananda Lakshmi belongs to Shoba Narayan, author of The Milk Lady of Bangalore: An Unexpected Adventure. She writes about food, travel, and culture for Condé Nast Traveler, Financial Times, New York Times, Wall Street Journal, and Saveur. Her commentaries have aired on NPR’s “All Things Considered.” Narayan is also the author of Monsoon Diary: A Memoir with Recipes, which was a finalist for a James Beard Award, and her essay “The God of Small Feasts” won the James Beard Foundation’s MFK Fisher Distinguished Writing Award. Visit shobanarayan.com.

© THE NERVOUS BREAKDOWN ALL RIGHTS RESERVED