In the words of the daughter in law

In one of the country’s oldest business families, some values run through generations

My father-in-law was 74 when I entered the TVS family as a young bride of 17,” says Prema Srinivasan with a laugh. “You can imagine how it was.”

We are at her spacious minimalist home in the Boat Club area of Chennai, right beside the White Elephant that is Dayanidhi Maran’s home. In her citrus yellow woven cotton sari and trademark sandal paste dot on her forehead, Srinivasan looks ageless. When I ask her age, she demurs.

The wife of the youngest son of T.V. Sundaram Iyengar, whose early entrepreneurship has spawned a sprawling family conglomerate, Srinivasan is reminiscing about what it means to be the daughter-in-law of one of Tamil Nadu’s—and arguably south India’s—most iconic business families. “My father-in-law was an extraordinary character,” she says. “A man of few words and one who valued quality and punctuality above all.” 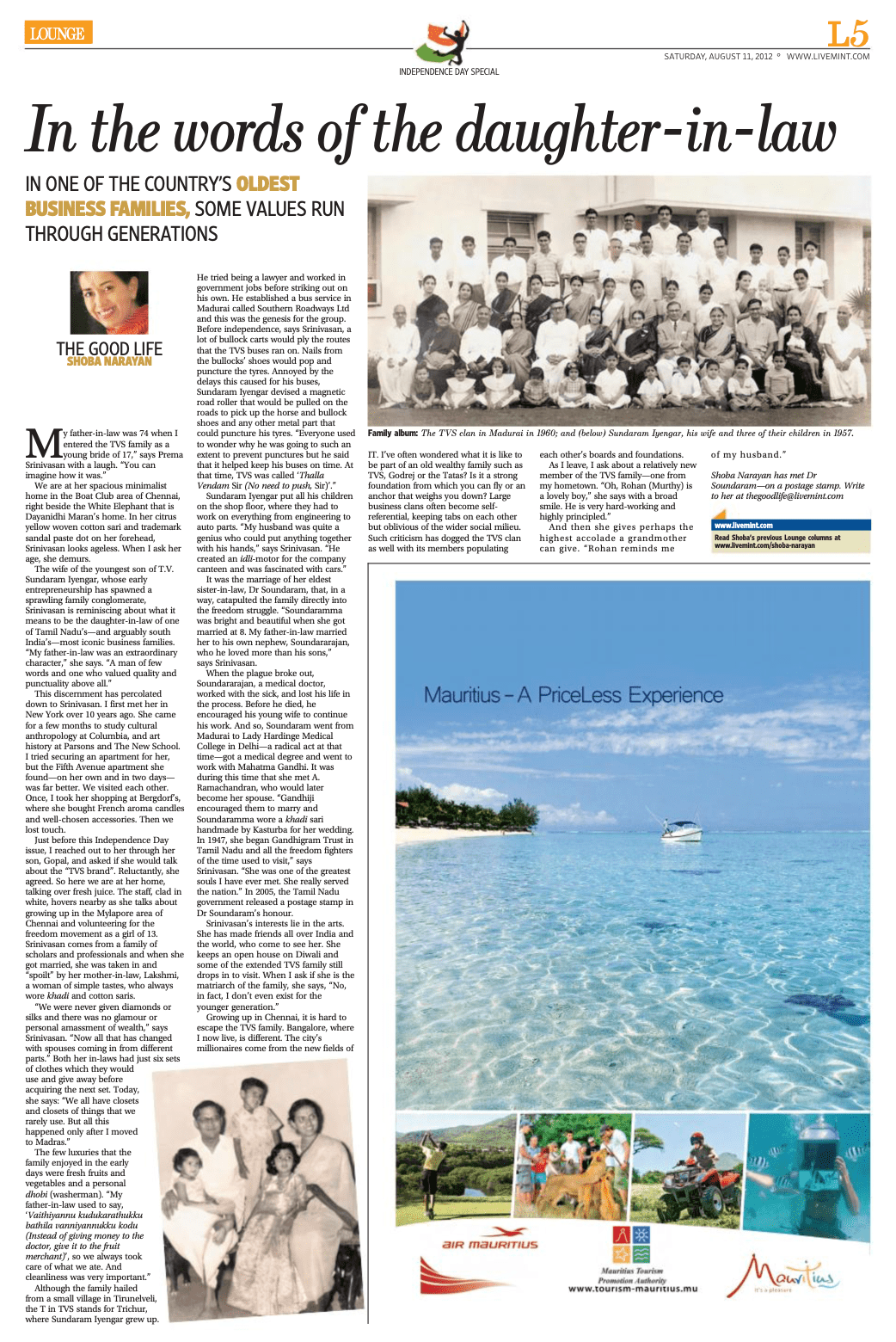 This discernment has percolated down to Srinivasan. I first met her in New York over 10 years ago. She came for a few months to study cultural anthropology at Columbia, and art history at Parsons and The New School. I tried securing an apartment for her, but the Fifth Avenue apartment she found—on her own and in two days—was far better. We visited each other. Once, I took her shopping at Bergdorf’s, where she bought French aroma candles and well-chosen accessories. Then we lost touch.

Just before this Independence Day issue, I reached out to her through her son, Gopal, and asked if she would talk about the “TVS brand”. Reluctantly, she agreed. So here we are at her home, talking over fresh juice. The staff, clad in white, hovers nearby as she talks about growing up in the Mylapore area of Chennai and volunteering for the freedom movement as a girl of 13. Srinivasan comes from a family of scholars and professionals and when she got married, she was taken in and “spoilt” by her mother-in-law, Lakshmi, a woman of simple tastes, who always wore khadi and cotton saris.

“We were never given diamonds or silks and there was no glamour or personal amassment of wealth,” says Srinivasan. “Now all that has changed with spouses coming in from different parts.” Both her in-laws had just six sets of clothes which they would use and give away before acquiring the next set. Today, she says: “We all have closets and closets of things that we rarely use. But all this happened only after I moved to Madras.”

The few luxuries that the family enjoyed in the early days were fresh fruits and vegetables and a personal dhobi (washerman). “My father-in-law used to say, ‘Vaithiyannu kudukarathukku bathila vanniyannukku kodu(Instead of giving money to the doctor, give it to the fruit merchant)’, so we always took care of what we ate. And cleanliness was very important.”

Although the family hailed from a small village in Tirunelveli, the T in TVS stands for Trichur, where Sundaram Iyengar grew up. He tried being a lawyer and worked in government jobs before striking out on his own. He established a bus service in Madurai called Southern Roadways Ltd and this was the genesis for the group. Before independence, says Srinivasan, a lot of bullock carts would ply the routes that the TVS buses ran on. Nails from the bullocks’ shoes would pop and puncture the tyres. Annoyed by the delays this caused for his buses, Sundaram Iyengar devised a magnetic road roller that would be pulled on the roads to pick up the horse and bullock shoes and any other metal part that could puncture his tyres. “Everyone used to wonder why he was going to such an extent to prevent punctures but he said that it helped keep his buses on time. At that time, TVS was called ‘Thalla Vendam Sir (No need to push, Sir)’.”

Sundaram Iyengar put all his children on the shop floor, where they had to work on everything from engineering to auto parts. “My husband was quite a genius who could put anything together with his hands,” says Srinivasan. “He created an idli-motor for the company canteen and was fascinated with cars.”

It was the marriage of her eldest sister-in-law, Dr Soundaram, that, in a way, catapulted the family directly into the freedom struggle. “Soundaramma was bright and beautiful when she got married at 8. My father-in-law married her to his own nephew, Soundararajan, who he loved more than his sons,” says Srinivasan.

When the plague broke out, Soundararajan, a medical doctor, worked with the sick, and lost his life in the process. Before he died, he encouraged his young wife to continue his work. And so, Soundaram went from Madurai to Lady Hardinge Medical College in Delhi—a radical act at that time—got a medical degree and went to work with Mahatma Gandhi. It was during this time that she met A. Ramachandran, who would later become her spouse. “Gandhiji encouraged them to marry and Soundaramma wore a khadi sari handmade by Kasturba for her wedding. 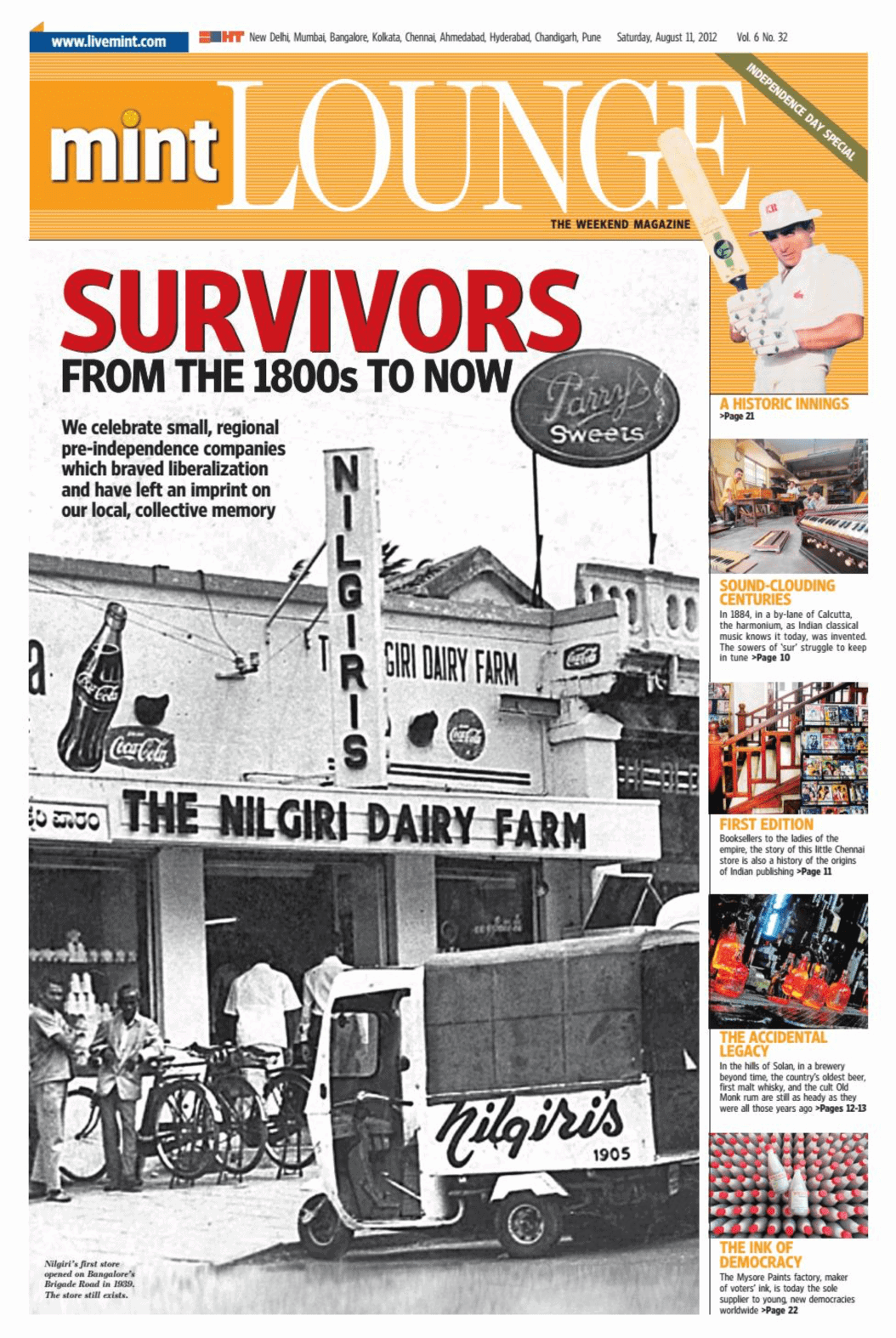 In 1947, she began Gandhigram Trust in Tamil Nadu and all the freedom fighters of the time used to visit,” says Srinivasan. “She was one of the greatest souls I have ever met. She really served the nation.” In 2005, the Tamil Nadu government released a postage stamp in Dr Soundaram’s honour.

Srinivasan’s interests lie in the arts. She has made friends all over India and the world, who come to see her. She keeps an open house on Diwali and some of the extended TVS family still drops in to visit. When I ask if she is the matriarch of the family, she says, “No, in fact, I don’t even exist for the younger generation.”

Growing up in Chennai, it is hard to escape the TVS family. Bangalore, where I now live, is different. The city’s millionaires come from the new fields of IT. I’ve often wondered what it is like to be part of an old wealthy family such as TVS, Godrej or the Tatas? Is it a strong foundation from which you can fly or an anchor that weighs you down? Large business clans often become self-referential, keeping tabs on each other but oblivious of the wider social milieu. Such criticism has dogged the TVS clan as well with its members populating each other’s boards and foundations.

As I leave, I ask about a relatively new member of the TVS family—one from my hometown. “Oh, Rohan (Murthy) is a lovely boy,” she says with a broad smile. He is very hard-working and highly principled.”

And then she gives perhaps the highest accolade a grandmother can give. “Rohan reminds me of my husband.”

Shoba Narayan has met Dr Soundaram—on a postage stamp. Write to her at [email protected]