Have to write another article on inheriting collections. Don’t think I gave a satisfactory answer to this very interesting question: are you doing your kids a favor by passing on your collection to them?

Driven by a passion for possession
Can you love a collection that you inherit, particularly one that is not easy to maintain?
Shoba Narayan
First Published: Sat, Sep 14 2013. 12 03 AM IST 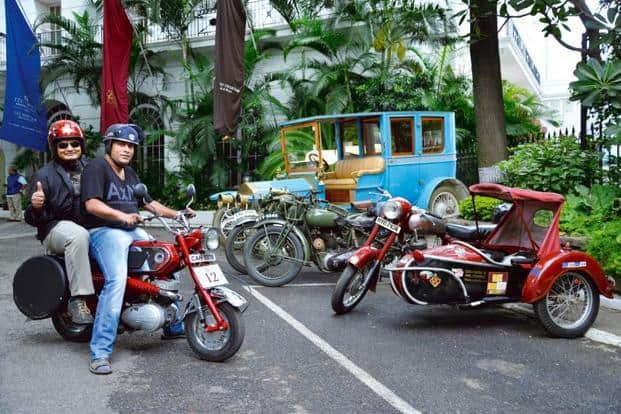 The vintage rally in Bangalore was part of a campaign for a cleaner city. Photo: Hemant Mishra/Mint
A few weeks ago, on a beautiful Sunday morning, a few hundred enthusiasts gathered at the ITC Windsor, Bangalore, for a vintage car rally that lasted all morning. I went to answer a question that had been puzzling me for years: Can you love a collection that you inherit, particularly one that is not easy to maintain?
Collecting, I get: hunt, find, own. Cars, I get: the petrol fumes and orgasmic “vroom”. I understand the seduction of owning old things, which have stories to tell and previous lives to reveal: antiques, heritage, vintage, call it what you will. Vintage cars have all three. Is inheriting such a collection a privilege or a pain?
Rupali Ravi Prakash, 24, makes it sound like a privilege. A slim girl clad in a simple jeans and T-shirt, she stands to inherit 180 vintage cars, collected by her father, a cardiothoracic surgeon, Dr Ravi Prakash. A Bangalore girl who attended the liberal Valley School, she addresses people politely with a “sir” or “ma’am”. She develops board games for a living, and markets vintage car memorabilia through her own brand called Roadster. If you passed her on the street, you would not guess that this girl rode a 1907 Locomobile at age 2.
Rupali is passionate about vintage cars. She grew up around them. Her father, called “Doc” by the vintage car world, began with a Sunbeam-Talbot 1937, willed to him by (father and daughter repeat this frequently to the press) General Mahadevan of Chennai. Since then, Prakash has amassed 180 cars, housed in “Kala Farm”, outside Bangalore. Their collection, says Rupali, includes cars from “every era—Edwardian, Veteran, Vintage as well as Classic cars, right from an 1886 Benz Patent-Motorwagen (the first gasoline-powered automobile), to Jaguars, Rolls-Royces, Mustangs, Delages, Mercedes and so on”.
This must mean something to some of you vintage car buffs, but I was only trying to figure out if all these cars were awe-inspiring or ache-producing. Well, her father is a doctor so he’s got that covered, I guess. Fifteen men work full-time on these cars—tinkering, repairing and sourcing parts from all over the world. On weekends, and this is the best part, they get to take these vintage cars out for joyrides along country roads. Riding in these beautifully detailed automobiles is a thrill. They make you feel like Grace Kelly, or Gayatri Devi. “There is only one reason to do this: passion,” says Rupali.
Her father, a genial, smiling man clad in a cowboy hat and black pants, organized the rally, which ended with lunch at the ITC Gardenia. The large banquet hall was filled with men wearing shirts with cars designs on them and cowboy hats. Both Rupali and Dr Prakash list their invitation to the Concours d’ Elegance, a vintage car rally at Pebble Beach in California, US, in 2012 as one of their proudest moments. Another vintage car enthusiast at the event estimated the cost of transporting two vintage cars from Bangalore to Pebble Beach to be about Rs.50 lakh, maybe more. I didn’t want to ask the owners. It’s like the old saying: If you have to ask the price, you just don’t get it. Asking a vintage car collector the cost of transportation is like asking a Bordeaux wine collector about the cost of cork: a bit tasteless.
At Pebble Beach, Prakash drove a 1930 Delage and Rupali, a 1907 Locomobile. “To be the only Indians with two car entries was a proud moment for us and a lifelong dream for my father,” says Rupali.
Across the country, in Delhi, I visited another inheritor of vintage cars. Anubhav Nath, 35, who is the director of Ojas Art gallery and a co-founder of Ramchander Nath Foundation, a think tank with a focus on the arts. He has a lovely property at Mehrauli in the shadow of the Qutub Minar. Nath, who prefers not to put a number on his collection, has a 1912 Silver Ghost Rolls-Royce, a 1916 Buick, a 1936 Maybach from the Maharaja of Patiala, a rare 1930 Delage, a 1955 Chrysler Imperial that was gifted by King Al Saud of Saudi Arabia to Jawaharlal Nehru during his state visit to India and later acquired by Nath’s grandfather, in his shed. Nath’s favourite is a 1926 Rolls-Royce Phantom I, “as I remember playing taxi-taxi in it all the time,” he says.
Childhood memories: that must be it. Happy memories of grandfather working on the car while grandson plays in the car. That must be why these heirs care for the cars and the collection (once you take out commercial reasons, that is). It is the same with Rupali. She probably associates the cars with family, laughter, and nature.
“People ask me if I have added to the collection,” says Nath. “My reply is, “If I can just maintain the collection in the same condition that I inherited it, I would have done a good job. For me, it is my grandfather’s legacy that I am trying to preserve as best as I can. Yes, it is a lot of work, but at the same time, it is like a part of him continues to live with me.”
Poignant, isn’t it?
Shoba Narayan is happy to ride in vintage cars—that she doesn’t own. Then again, she might feel different if she were mechanically inclined.
Also Read | Shoba’s previous Lounge columns
First Published: Sat, Sep 14 2013. 12 03 AM IST