Strawberries on a train in India

Strawberries on a train in India

Once upon a train ride:

If you ask me about April Fool’s Day, I will tell you about strawberries and sunshine and travelling with Veena tai on the aptly named Matsyaganda Express from Mumbai to Mangaluru.

It was the first and the last time I saw Veena tai, but like many train friendships, she was unforgettable. When you are stuck with someone for over 12 hours, you learn to gauge their personality very quickly. And for me, a poor student who was perpetually hungry, the only gauge was the size of my fellow passenger’s tiffin carrier and the generosity of their spirit.

Veena tai climbed into the second-class sleeper compartment like a charging rhino, laden with boxes of various sizes. “I am taking the lower berth,” she announced. I nodded.

The army man sitting across from us stared at her ample frame encased in a Maharashtrian navvari sari and smiled weakly. Green glass bangles jingled in Veena tai’s hands as she arranged her boxes underneath the berth. “Are you two just going to sit there?” she asked gruffly.

We jumped up and began pushing her boxes into crevices. I sniffed like a dog, smelling flavours and fragrances that were foreign to me. “Bhakarwadi,” she explained, opening one and handing me a piece.

Without a word, I popped it into my mouth. Veena tai stared at me intently in the fashion of all great Indian cooks who can tell if you relish a dish without you having to say a word. I kept chewing. She nodded with satisfaction. “Here, have another,” she said with an approving smile. Her lips were stained with paan and her teeth were crooked. But with the golden Konkan sun behind her face, she looked like an angel to me. Her soft white cotton saree enveloped her frame. She smelled of fish, cardamom and talcum powder.

Her grey hair was parted exactly in the centre and tied into a bun. She had sandal paste on her throat and kumkum on her forehead. I fell in love with her instantly.

I was going to Mangaluru to see the land where my great grandfather worked. I didn’t speak Konkani or for that matter, Marathi, but that didn’t matter. We conversed in broken Hindi mixed with generous amounts of bhakri roti and garlic pickle.

What is it about train travel that evokes so much love and nostalgia amongst Indians? It has to do with being children, I think, because that is when all of us took the best train journeys.

It has to do with time slowing down allowing us to savour specific moments: the sight of the blue train rounding a bend in the twilight, the clatter of wheels as they cross the bridge, the beauty of this land we call Bharat, the scent of jasmine from the honeymooning couple next door, the stations where different things are sold at different times, the musical call of the vendors who sing, “Chai, chai.” Or “Kaapi, kaapi.”

I have a friend in Singapore who works for a luxury firm. He graduated from IIM Ahmedabad and quickly climbed the corporate ladder. His dream is to bring his children to India for a train journey.

“Unreserved, yaar, like how we used to travel,” he says without a shade of irony. Brioni suit on a broad-gauge train. This too is an experience.

Between Honnavar and Ratnagiri, in a station whose name I don’t remember, I spotted the strawberries right next to the news stand. I ran out and bought four boxes mostly because they were ridiculously cheap and I could afford to give them as thanks to Veena tai. 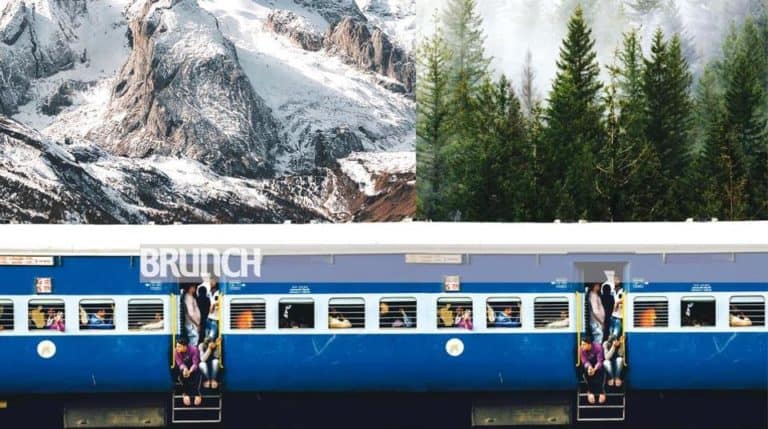 The train pulled away just as I was paying the vendor. And in true Hindi film fashion, I ran behind and caught up. The army man gave me a hand and pulled me in. One of the strawberry boxes splattered on the ground sending Holi-red colours all around.

There are certain gestures unique to India. One is putting your hands over another person’s eyes from behind. And this is what I did to Veena tai as she sat staring out of the window. I snuck in from behind her and closed her eyes. “Bor, bor,” she said. Or maybe she said, “Arrey-re.” I don’t remember. I do remember her next sentence though because it was so strange.

Apparently, that is what her grandchildren would tell her when they closed her eyes from behind on a certain day in April.

I handed her the strawberries. “April Fool’s Day, Tai,” I said.

We slurped the strawberries. Ruby red juice ran down from the corners of our mouths. Together we grinned.

Maybe it wasn’t the paan that stained her mouth. Maybe it was the strawberries.

(This column addresses the issue of parenting our parents and other unique facets of This Indian Life and our culture. If you have stories about the weird and wonderful relationships that enrich or enervate your life, write in.)