Interview with The Dalai Lama Part 2

Interview with The Dalai Lama Part 2

The Dalai Lama’s take on ageing and wisdom part 1:

Can a monk teach me, a social media junkie, about happiness? Our two worlds after all, are poles apart. The monk in question is His Holiness The Dalai Lama, arguably one of the most beloved leaders of our time. For a man who has cast away worldly life, his worldly accomplishments are mind-boggling: Nobel Laureate and global statesman to name two from a long list.

His Holiness is in Bengaluru under the auspices of the Vana Foundation’s Vidyaloke initiative, which aims to bring Buddha’s wisdom to contemporary India. But can someone who is venerated as God by countless Tibetans guide us mere mortals with our petty jealousies and Facebook narcissism towards nirvana? 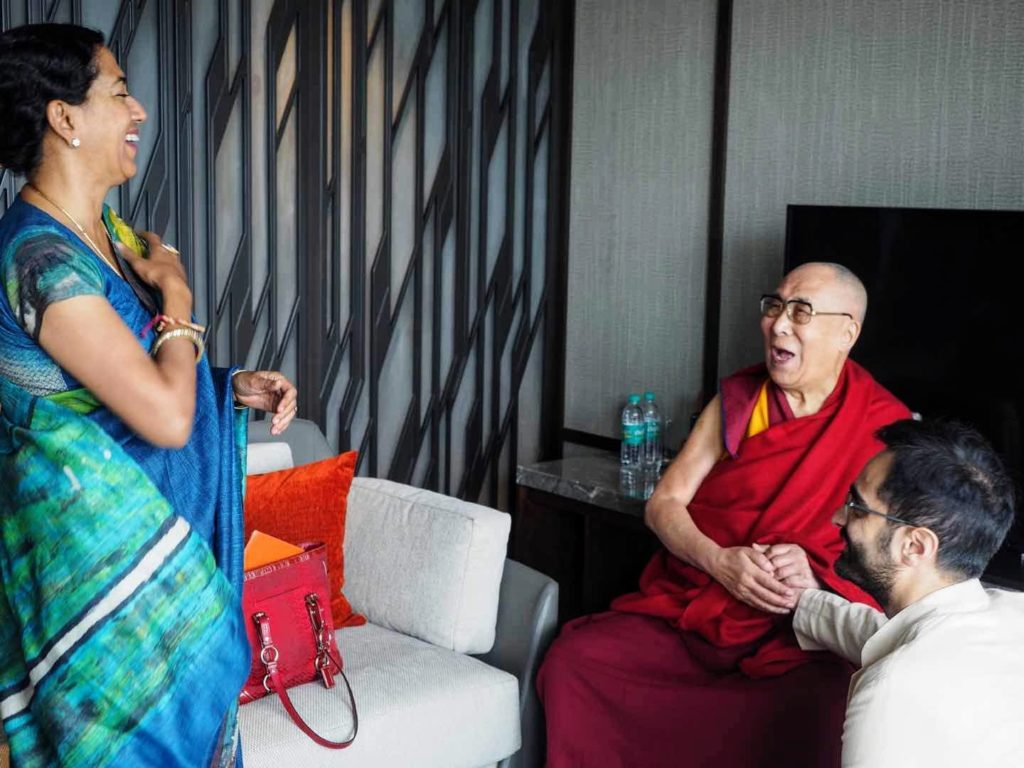 That is what I plan to find out.

The lobby of the Conrad Bengaluru, is buzzing with hangers-on, all of whom want to see, touch and feel His Holiness. A muscled Tibetan man ushers me to the top floor, past policemen, barricades and a dozen advisors. Finally, I see him: this orange-robed man, whose smile and pithy quotes have captured the hearts of celebrities and commoners from Tibet to Tanzania. He rises to greet me. Veer Singh, the founder of Vana, who has orchestrated this audience, bends down to touch the Dalai Lama’s feet. I do the same. Awkwardly, I offer the tuberose garland I have purchased from Ulsoor market. What to give a man who seeks nothing? To my shock, His Holiness doesn’t simply hand over the garland to his handlers, like Southern politicians do with all the rose garlands they collect. Instead, he asks me to garland him and smells the fragrance of the flowers. This, I suppose, is mindfulness: to savour small moments. His schedule is packed but he is unhurried. His stillness is both soothing and shocking. It forces me to ask the question: of what purpose lists? Of what purpose this busyness that we force upon ourselves? Is that the best way to realise human potential?

After an hour with him, I am touched by grace.

It is a feeling that lasts weeks and months past our meeting. And in it lies the first takeaway of our interaction: to stop and take stock of your day, year or life, for five to 10 minutes a day. To do so at several points during the day would be ideal. It can act as a compass and offer a course correction.

Something the Dalai Lama says sticks in my mind. It is a parable about a Buddhist monk. When asked what he does, the monk says, “As little as possible. But I do what is important.”

My life is the opposite. I am constantly checking my phone, answering emails, sending WhatsApp replies, liking Instagram photos, all of which seems important. Every moment that can offer a lull is used to check my phone. When I stand in line or wait in traffic, I don’t softly fall into the boredom that is the wellspring of all invention. Most of us are this way. Instead of exhaling, relaxing, shutting our eyes, taking a nap, we check the never-ending stream of messages that our devices supply us: like a shot of dopamine.

And how does one cultivate the sixth mind?

“This is a 1,000 year old Indian tradition,” says His Holiness. “It involves meditation, samatha, which channelises the strength of the sixth mind. Literally, samatha means that the main mind must take its own position — should not run after sensorial experiences.”

It begins with the breath and with visualisation.

Later, while eating a biscuit on stage, His Holiness tells the crowded auditorium, “You know, we use a lot of visualisation in Buddhist meditation. So I get to eat this biscuit. You all can visualise it.”

I thought that meditation was about focusing on the breath. The Dalai Lama’s approach is more logical. It involves mental work, inner debate, analysis. “When you face sadness or difficulty, think about or analyse that situation,” he says. “If you can overcome that, then no need for frustration. If there is no way to overcome, then make the distinction between appearances and reality. Look from a wider perspective. As for me, I practice altruism.”

It will take you and I a lifetime to get it right. I’ve taken a small step. Every time I experience disquiet, I don’t push it down by checking my phone. I sit on my swing and try to see where the feeling is coming from. Whether I can sift through it for mental clarity. It is a small step, but it is my first one.

I have a feeling that its ripples will affect my life.

This is the first of a three-part series on ‘The Dalai Lama’s take on ageing and wisdom.’ Part 2 here. Read Part 3.