No kidding, this is Wimbledon
The club should ease up and celebrate its youngest patrons like the other Opens
Shoba Narayan
First Published: Sat, Jun 22 2013. 12 08 AM IST 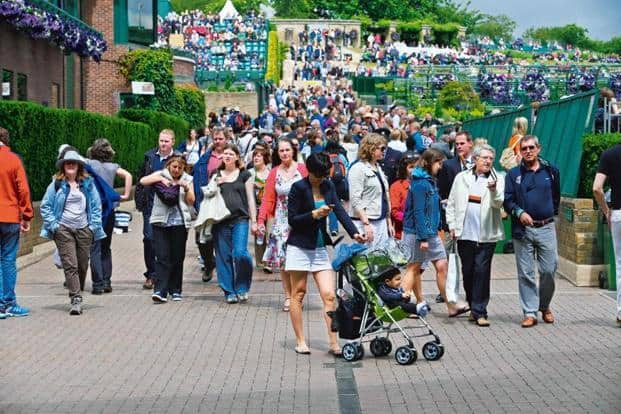 Updated: Sun, Jun 23 2013. 08 13 PM IST
It was a sunny day in May last year. My family and I—and what seemed like three million excited children—strolled outside the red clay courts of Roland Garros in Paris. Here was Maria Sharapova, accosted by a passel of boys bearing balls for autographs. There was Andy Roddick high-fiving a few children before striding into court. Here was Li Na posing for a camera with what seemed like an entire Chinese contingent. There was Roger Federer shyly waving to ecstatic fans before a security detail hustled him into Centre Court, along with what seemed like a giant waddling balloon.
Outside the courts and in the bleachers, countless young boys and girls stood and sat beside their parents, staring intently at their favourite players and speaking the universal language of a sports fan that even I, a novice, could understand. They were speaking French but through hand gestures and excited debate, they were analysing the players and shots. This then is how the next generation of tennis fans gets nurtured.
I was there, wandering the grounds with my sports-crazy husband, his eyes glazed like an addict in search of the next perfect shot that would transport him to high heaven. We were sitting beside a bespectacled Frenchman who reminded us of our neighbour in Bangalore. Every time Federer performed his magic, the men would look at each other and sigh. Culture dissolved and language proved no barrier as countless fans came together in collective adulation.
Later, we stepped out and my 11-year-old daughter behaved like a bounty hunter in search of the next autograph. She elbowed and greased her way towards Svetlana and Serena; Rafa and Tsonga. The sun was shining. Birds were twittering. Fans were slurping on ice cream. French music played in the background. Entire stadiums dissolved into claps as the French players put on a show. Tsonga! Clap-clap-clap. Chant, clap. La dolce vita all around.
Pan the camera to Wimbledon a few years ago. My brother has a home in this charming town and this is where our extended family had gathered to take in the games. The atmosphere, however, couldn’t have been more different. Children are not exactly welcome at Wimbledon and most of our time was spent arranging for babysitting coverage for fear of inviting scorn and abuse from proper English fans.
The French Open has its “kids’ day” on the Wednesday before the tournament starts. The US Open has named its version after tennis legend Arthur Ashe. The Australian Open makes a spectacle of its kids’ day, posting videos and giddy commentaries on its website. As for Wimbledon, there is no kids’ day before The Championships.
Wimbledon, as tennis champion Angela Barrett once remarked, “isn’t a place you bring children”. Should you dare to take the little ones, you had better make sure that they are well-behaved. Even the duchess of Kent, whose husband was the president of the All England Club for 30 years, was refused permission to bring the child of a friend into the Royal Box. In an editorial, The Daily Telegraph said: “The Club has been accused of snobbery and arrogance before. Even by its own standards, however, managing to offend its principal Royal supporter must surely count as a grievous double fault.”
Wimbledon is special. I’ll give you that. Compared to its American neighbour across the pond, The Championships are usually described as classy. The matches may be spirited at the US Open, but the hot-dog stands and Hawaiian shirts are an eyesore.
I have never been to the Australian Open. Roland Garros, in my view, strikes a happy medium between the studied elegance of Wimbledon and the devil-may-care insouciance of the US Open. Wimbledon doesn’t exactly bar children, but it doesn’t make them feel exactly welcome either. Organizational psychologists will point to Wimbledon’s lack of a kids’ day as a signal of its tolerance (or lack thereof) towards children. This should change.
As with everything, there are two ways to look at this. One group will say Wimbledon doesn’t need to prove itself to the child brigade. Bringing millions of scrambling boys and girls into its pristine grounds will change its brand; stain its character forever. Tradition ought to be preserved; restraint ought to be observed. This is the sort of place where you eat strawberries and cream with dainty forks and wear sun hats; not the occasion or location where frazzled parents follow dehydrated, wild-eyed children who need to “go pee-pee” while demanding a Pepsi. Wimbledon does hold children’s programmes throughout the year, which will work for its locals, but not for the global tourists who fly in just for The Championships.
The club should ease up and celebrate its youngest patrons like the other Opens. Inaugurating a kids’ day before The Championships will bring this most English of games (even though it originated in France) to the world of today where rappers are kings and royals are mascots. It would replace the stuffiness with some joie de vivre.

Shoba Narayan enjoys her strawberries and cream but prefers the ice cream at Roland Garros any day.