Are Robert Parker’s 100-point wines worth it? for Mint Lounge

Are Robert Parker’s 100-point wines worth it? for Mint Lounge 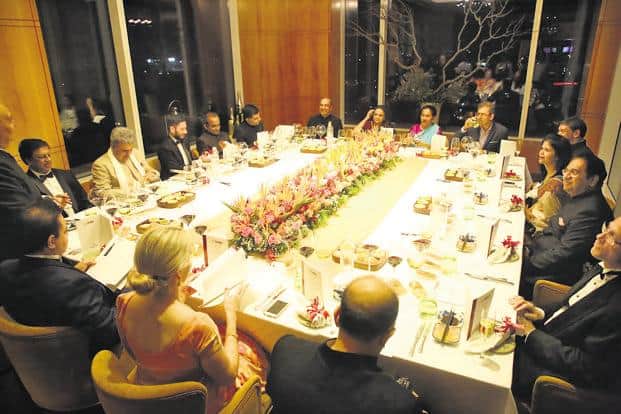 The first wine of the evening is a 2010 vintage M Chapoutier Ermitage de l’Oree Blanc, from the Rhône valley in France, and I immediately detect a contrast in the audience reaction.

For some, its name means something. For others, it is but one more unpronounceable French wine.

I do know that the base grape of this white wine is Marsanne, not the usual Sauvignon blanc or Chardonnay: a hot-weather grape, like Rousanne and Moscato, that would do well in India were it not prone to rot.

I am at the 100-Point wine dinner of The Wine Connoisseurs (TWC), a group of wine geeks that is far less pretentious than its name suggests.

This dinner is special because all the wines have been awarded 100 points by Robert M. Parker Jr, arguably the most influential—and reviled—wine critic of our time. Sixteen people have gathered around a rectangular table at the Shangri-La Hotel to sample some exquisite wines. Each has paid ₹ 11,000 for this privilege, a bargain, in my view, given the diversity of wines and cuisine on offer.

Every metropolitan city in India has wine clubs. The problem is that they are usually huge. Members congregate to eat, drink and make merry. If your goal is to understand and appreciate wine, a different approach is required: Get together a group of six friends who are interested in wine, ask each to bring a bottle of wine, force yourself to talk about it, not in abstract “Oh I love this wine” terms, but in concrete, specific language which utilizes the technical terms that experts use.
If technology can have jargon, why not wine?
Learn this language, and think in specific terms.
What is the colour of the wine?
If it is light red, is it a Pinot Noir?
Which are the famous regions growing Pinot Noir, besides Burgundy and Oregon?
What is the grape that South Africa is known for?
All this knowledge is out there to find.
The difference is that talking about this stuff on a monthly basis makes it stick in the memory.
This is what TWC members do.
Every now and then, the group organizes a “signature” event, such as this 100-Point dinner.

Devesh Agarwal, the founder of the group, says planning the dinner took a year, driven as it was by logistics, diversity of regions, and cost. Most of the top wines come from France: the regions of Bordeaux and Burgundy. The simplest thing to do for such a dinner would be to source wines from there. Instead, the final list included Australia, Spain, Portugal and Napa Valley (California). “Sourcing these wines was a huge planning exercise,” says Agarwal. “Who was going where? Who had access to cellars abroad? Who was travelling through Dubai Duty Free, where Le Clos sells great wines? Things like that.”

“The drinking age of the wines was a factor too,” says Chetan Kamani, a co-founder. “And we sourced the wines well. We paid less than the price of these wines on Wine-searcher.com.”

Great wines, by which most people mean wines made in the “Old World” regions of Europe—mainly France, Italy, Spain, Germany—sometimes need to age for decades. This poses a problem for dinners such as this one. The third wine of the evening, for instance, was a Chateau Larcis Ducasse, Saint-Émilion Grand Cru, Bordeaux, France, 2005. While the label proclaimed that it was drinkable from 2015, many of us found it too young, a bit too tight, tannic, like a compressed bud. “Look at the colour of this wine,” said Abhay Kewadkar, a winemaker and consultant. “It is still dark ruby red, and has not turned brick red or light brown, which is what happens to wine as it ages. That means this wine will hold up and age nicely for 10 more years.”

Most members of the group collect wines. Many have differing approaches. Some go by region. Nitesh Gulhati, who runs Sonarome, an aromatics company, and invests in wine through London-based Cult Wines, loves the muscular wines from Rioja in Spain. Others, like Ananth Narayanan, CEO of Myntra, go by ageing potential and milestones. “French wines last longer than 20 years,” says Narayanan. “The Italian and Spanish wines last 10 years and the American wines are drinkable in five years.”

He has also bought cases of the years in which each of his three daughters was born, so that he can gift it to them at their weddings. “It’s a win-win,” he laughs. “If the kids don’t want these wines, I’ll drink them.” Narayanan is currently drinking wines from the 1980s, which he says are “drinking beautifully” now.

The highlight, many agreed, was a Sine Qua Non ‘Shakti’ Grenache, from Ventura County, US, 2014. It was, as Jay Bhow, vice president of California-based software company Lithium Technologies, said, “An incredible expression of Grenache, layers and layers of fruit concentration on the palate with a superb finish.” We had two wines made from the same grape that evening, called Grenache in America, and Garnacha in Spain. The second was a bit off: sour, mouldy, even though it was rated 100 points. This wine—Bodegas Alto Moncayo Garnacha, Campo de Borja, Aragon, Spain, 2009—perhaps hadn’t been stored well.

As the evening wore on, the wine dinner came to feel a bit like theatre.

The scene opens with a beautifully laid out rectangular table at Caprese restaurant, Shangri-La, Bengaluru. Low flower arrangements with birds of paradise. Calligraphic name tags with menu cards. Sixteen men and women, clad in tuxedos, bandhgalas, suits and saris, sip Veuve Cliquot champagne. Abha Bhow stands up to formally introduce the first wine: “I have never tasted such a velvety-smooth, 100% single-grape white wine that was not citric at all.”

For amateurs like myself, articulating what you find in a wine glass is extraordinarily hard. But it can be done. This is a learnt skill. It begins with priming the nose. Sachin Satish holds a Wine and Spirit Education Trust (WSET) Level 4 diploma in wine and spirits, which, among other things, teaches you to smell and identify wines. He says that he spends time in the kitchen, blindfolded, picking up fruits, vegetables, spices and herbs, smelling them and trying to retain their aroma in his memory. He then figures out patterns and connections. For those, like us in India, who have never smelt linden berries, what is a close scent connection? Could we describe a wine as smelling like guavas? “The more you get into wine, the more you connect with history and agriculture,” says Satish.

A few hours before the evening. Dress code: formal Indian. The group’s WhatsApp chat pings constantly. A member discovers that he has two tuxedos but no bandhgala. Merry banter ensues about where to quickly source one. The women are amused that the men are so fussed about attire. A member suggests everyone take Himalaya Party Smart capsules before all the drinking. One member is on a flight from Mumbai and slated to arrive just in time for the dinner. People offer to auction his seat in case his flight is delayed. The flight is tracked and advice given about baggage. The member makes it, though his bandhgala is stuck in baggage claim.

Discussions about the menu have continued for weeks on WhatsApp. Chef Anurudh Khanna of the Shangri-La wants detailed choices so that members don’t need to bother about food while tasting these wines. Yet people sigh with contentment over the food Khanna is sending out: white asparagus, sashimi of wild-caught yellow fin tuna, melt-in-the-mouth lamb.

Members share notes on the three wines to come. We end with a fabulous port wine—Taylor Fladgate Vintage Port, Portugal, 1992—followed by a VSOP cognac and cigars. The kitchen staff comes around and is roundly complimented. The hotel’s general manager joins the table, offering ideas about wines from his country, Germany.

The wine I presented was the second of the evening, a Clarendon Hills Astralis Shiraz, McLaren Vale, Australia, 2010. I loved it. It was so aromatic. But this wasn’t specific enough. I struggled to describe it: “licorice, flowers (violets?), nutmeg, javathri, star anise, tannic.” How to describe a wine? How to pick it out later during a blind tasting? How to record it in the memory for posterity?

This is what sommeliers do for a living. And this is how Robert Parker has made his fortune and reputation. Is he good at his job? Yes, with some caveats. As member Heemanshu Ashar said, “Robert Parker is called the Pied Piper of Bordeaux. This evening for me was discovering Robert’s point of view in a glass of wine. Impressed? Yes! Enthralled? No!”