Your city determines how grumpy you are

Your city determines how grumpy you are

The Good Life: Your city determines how grumpy you are

Recently, I read a book called “The Geography of Bliss,” by Eric Weiner.  The book came out two years ago but only now made it to the top of my bottlenecked reading list.   In it, Weiner, a radio correspondent who calls himself a world-class “grump,” visits about a dozen cities around the world to answer what, to him, is a fundamental question: why are some places happier than others? Why, for example, do countries like Puerto Rico, Switzerland and Denmark score higher on the “happiness scale” than African countries like Burundi, Sierra Leone and Togo? Compiled by Dutch sociologist Ruut Veenhoven, India scores a respectable 5.5 in this World Database of Happiness.  So do Hungary, Russia, Lithuania and Kyrgyzstan.  We score higher than the African countries with a score of 2.5, but much lower than the “happiest” countries of the world that score at least 8.0.  These include Switzerland, Denmark, Iceland, Costa Rice and Puerto Rica.  Iceland may have fallen off the list, thanks to an underactive economy and an overactive volcano.  The fascinating thing about the World Database of Happiness is why some countries make the cut and others don’t.  Money may have something to do with happiness but not always—the UK, UAE and the USA all score in the 7s but Honduras and Guatamala which are not necessarily rich countries score higher than the Asian tigers such as Korea and Japan.  Pakistan scores 5, by the way, a tad lower than India’s 5.5. 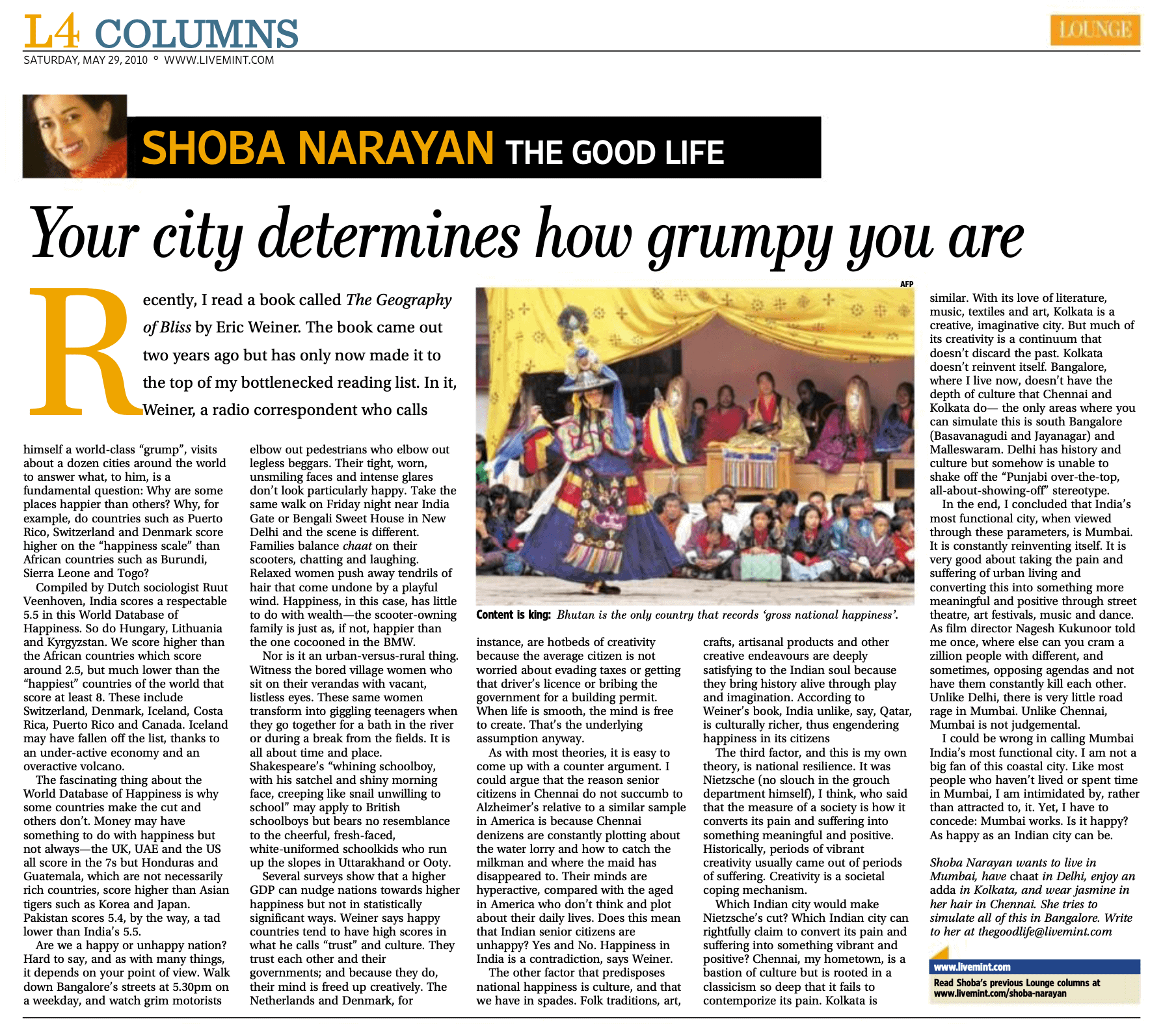 Are we a happy or unhappy nation? Hard to say, and as with many things, it depends on your point of view. Walk down Bangalore’s streets at 5.30 p.m. on a weekday, and watch grim motorists elbow out pedestrians who elbow out legless beggars. Their tight, worn, unsmiling faces, and intense glares don’t look particularly happy. Take the same walk on Friday night near Khan Market or Bengali Sweet House in Delhi and the scene is different. Families balance chaat on their scooters, chatting and laughing. Relaxed women push away tendrils of hair that come undone by a playful wind. Happiness in this case has little to do with wealth– the scooter owning family is just as if not happier than the one that is cocooned in the BMW. Nor is it an urban versus rural thing, witness the bored village women, who sit on their verandahs with vacant listless eyes. These same women tranform into giggling teenagers when they go together for a bath in the river or during a break from the fields. It is all about time and place. Shakespeare’s “whining schoolboy with his satchel and shiny morning face creeping like snail unwilling to school” may apply to British schoolboys but bear no resemblance to the cheerful, fresh-faced, white-uniformed schoolkids who run up the slopes in Uttarakhand or Ooty.

Several surveys show that a higher GDP can nudge nations towards higher happiness but not in statistically significant ways. Weiner says that happy countries tend to have high scores in what he calls “trust” and culture. They trust each other and their governments; and because they do, their mind is freed up creatively. Holland and Denmark, for instance, are hotbeds of creativity because the average citizen is not worried about evading taxes or getting that driver’s license or bribing the government for a building permit. When life is smooth, the mind is free to create. That’s the underlying assumption anyway.

As with most theories, it is easy to come up with a counter argument. I could argue that the reason senior citizens in Chennai do not succumb to Alzeimer’s relative to a similar sample in America is because Madras denizens are constantly plotting about the water-lorry and how to catch the milkman and where the maid has disappeared to. Their minds are hyperactive, compared to the aged in America who don’t think and plot about their daily lives. Does this mean that Indian senior citizens are unhappy? Yes and No. Happiness in India is a contradiction, says Weiner.

The other factor that predisposes national happiness is culture, and that, we have in spades. Folk traditions, art, crafts, artisanal products and other creative endeavours are deeply satisfying to the Indian soul because they bring history alive through play and imagination. India, unlike say, Qatar, is rich in culture and thus engenders happiness in its citizens.

The third factor and this is my own theory is national resilience. It was Neitszche (no slouch in the grouch department himself), I think, who said that the measure of a society is how it converts its pain and suffering into something meaningful and positive. Historically, periods of vibrant creativity usually came out of periods of suffering. Creativity is a societal coping mechanism .

Which Indian city would make Neitzsche’s cut? Which Indian city can rightfully claim to convert its pain and suffering into something vibrant and positive? Chennai, my hometown, is a bastion of culture but is rooted in a classicism so deep that it fails to contemporize its pain. Kolkata is similar. With its love of literature, music, textiles and art, Kolkata is a creative, imaginative city. But much of its creativity is a continuum that doesn’t discard the past. Kolkata doesn’t reinvent itself. Bangalore, where I live now, doesn’t have the depth of culture that Chennai and Kolkata do— the only areas where you can simulate this is South Bangalore (Basavangudi and Jayanagar) and Malleshwaram. Delhi has history and culture but somehow is unable to shake off the “Punjabi over-the-top, all-about-showing-off,” stereotype.

In the end, I concluded that India’s most functional city, when viewed through these parameters is Mumbai. It is constantly reinventing itself. It is very good about taking the pain and suffering of urban living and converting this into something more meaningful and positive through street theater, art festivals, music and dance. As film director, Nagesh Kukunoor told me once, where else can you cram a zillion people with different and sometimes opposing agendas and not have them constantly kill each other. Unlike Delhi, there is very little road rage in Mumbai. Unlike Chennai, Mumbai is not judgemental.

I could be wrong in calling Mumbai India’s most functional city. I am not a big fan of this coastal city. Like most people who haven’t lived or spent time in Mumbai, I am intimidated by, rather than attracted to it. Yet, I have to concede: Mumbai works. Is it happy? As happy as an Indian city can be.

Shoba Narayan wouldn’t mind living in Mumbai if she were ten years younger. Now, she is past her prime for a city that is constantly being primed. 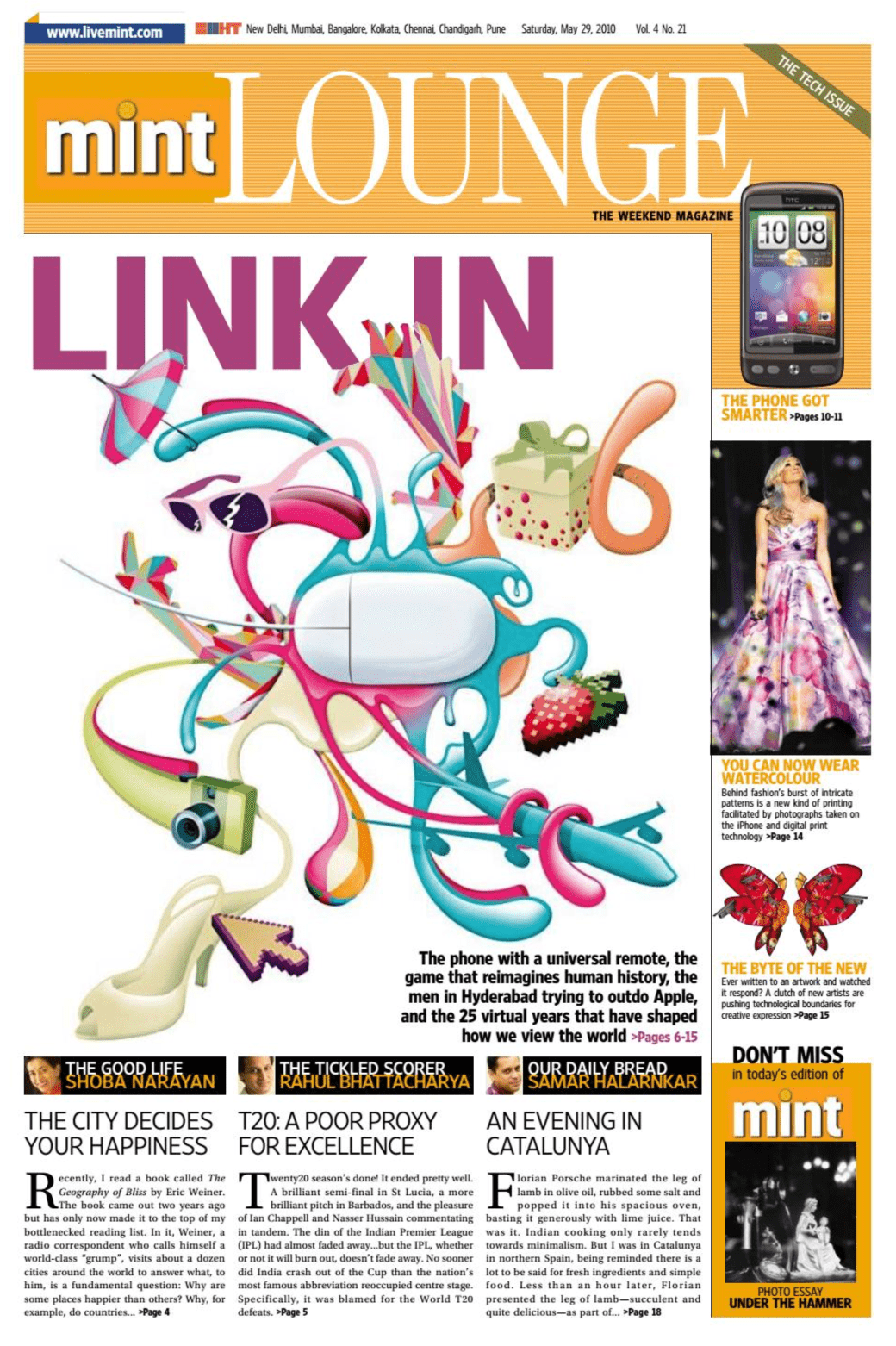