Thanks, Vidya, for pointing out that this wasn’t there in my website. 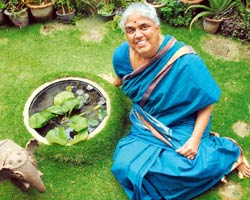 Philanthropy is a funny thing. All of us, and by that I mean the readership of this newspaper, have the urge to do good, give back, and effect change. Yet, each of us is bound by quirks and nostalgia. Many give to religious charities: Why do Amitabh Bachchan and the Ambanis give to the already-rich Tirupati temple, especially when rumour has it that the Lord has left the premises?

Legacy is another turn-on: Witness the number of donors who give so that buildings and airports are named after them. Parochial passion is a powerful thing, one that is hard to dislodge: Why do so many people set up schools in their native village, for instance? Why not choose any deserving village? I have a Sindhi friend who refuses to give money to Sindhi charities, saying that it is the “basest” and, in her mind, narrowest form of charity. I tell her that the fact that she refuses to give to a Sindhi charity indicates a regional hold just as strong as if she did give.

The point is that all of us are bound by our roots. Like most educated Indians, I fight against this urge. I rarely give to regional charities and I never give to charities on the basis of birth factors (we will only educate Hindu children). The surprising thing for some people is that we Indians “give” at all. You would think that the average Indian, with his pressing problems, power outages, failed infrastructure, family and work stresses wouldn’t have the time or the inclination to give to charities. Wrong. Indians donate money in droves—to temples, schools and other charities. Not enough to change a culture (female infanticide still persists) or institutionalize a value. But we still give of ourselves and not just to indulge our regional, parochial or religious instincts. Sometimes, a simple idea takes over; it becomes larger than life, larger than affiliations, and becomes the binding factor. The idea seduces.

This piece is about seductive ideas that aspire to change the world. This isn’t a complete, Top 50, or even an objective, list.
Goonj is one such idea. Its propagator is Anshu Gupta, a New Delhi-based social activist, Ashoka Fellow and all-round do-gooder (www.goonj.org). I met Anshu while living in Singapore. I was part of a group called Focus India Forum that donated money to Indian charities. The group did it smartly. It chose charities across India—one in Assam, one in Tamil Nadu, one in Mumbai and the other in (if I remember right) Gujarat—thus appealing to regional affiliations. In our Singapore charity club meeting, Goonj was thrown in as an afterthought. “Friends, we have Assam, Gujarat, Tamil Nadu and Mumbai. And oh, there is this organization called Goonj. They redistribute clothes, school stationery and other supplies from rich people to poor people. They tie up with rich urban schools in Mumbai and donate the leftover uniforms, backpacks, pencils, books and notebooks to poor schoolchildren in Bihar and Orissa.”

I was blown away by the idea. Here, finally, was a group that wasn’t trying to “raise” or create anything. No new material; simply redistributing the old. I am naturally attracted to logistics and O.R (operational research). I am the type of person who approaches the immigration counter plotting which queue will take the shortest time to reach the official. The fact that Goonj specializes in massive logistical exercises excited me. Talk to Anshu and he will tell you about using army trucks to get winter woollens to Kashmir; about using IIT Madras as a base while getting supplies out to interior Tamil Nadu during the tsunami; and the school-to-school programme which links schools in Mumbai to those in Madhya Pradesh. The problem in many cases is not the fact that there are not enough goods; it is the fact that nobody knows how to get the goods to people in need. That’s where Goonj steps in.

America’s spirit of volunteerism and philanthropy will put any nation to shame. That said, we Indians, too, are no laggards. The IT revolution has spawned an era of wealth creation and thankfully, many of its beneficiaries use their moolah to single-handedly change the world. Rohini Nilekani’s Arghyam ( www.arghyam.org ) intends to bring “safe sustainable water for all”. Arghyam, which means “sacred water” in Sanskrit, is part of every pundit’s recitation of the different “courtesies” for God (“padhyam, arghyam, aachamanam”). Rohini, however, has taken Arghyam out of the realm of religion and turned it into a secular mission. This ain’t easy. Unlike children, water isn’t “sexy” in terms of attracting funds. It, however, is India’s pressing need. Just ask any slum child who stands in line with a colourful plastic container for her day’s supply of drinking water.

Recently, however, a happy trend is gaining momentum across India and, indeed, the world. Philanthropy is not just about rich people writing large Buffett-esque cheques. It is about middle-class professionals who juggle their jobs with their charity work and who, in some cases, make charity their life’s work, often taking on the most obscure causes. It is the people actually doing the grunt work. What motivates an Anshu Gupta to spend his life trying to figure out how to transport school bags from Bandra to Bhojpur? What makes a Ramesh Swamy go to different people and talk about Unnati (http://www.sgbstrust.org), which provides vocational training to 18-year-olds? Swamy makes a comfortable living. He has a nice home, a pretty wife, grown sons. He doesn’t need to mess with Unnati. He can take a world tour or buy his wife a diamond ring. Instead, he screens slum children and lectures beggars. Whenever a beggar approaches him, he hands out his visiting card and says, “Come and get trained at Unnati and I’ll take care of your life.” Fortunately for us, the people running these charities are dogged; they never give up. Their perseverance is humbling and inspiring.

Vanaja Ramprasad has seen two generations grow up eating food from chemical-intensive agriculture. Her interest in sustainable foods started three decades ago when she asked a simple question: Why were there so many malnourished children in India when the granaries were overflowing? She became a founding member of the Green Foundation with one important goal: to save the heritage of diversity in our country’s agriculture.

Diversity means cultivating grains such as jowar, bajra and ragi that are in danger of dying out because few eat them. I spent a day with Srikanth, one of the directors. He teaches farmers techniques to make them self-sufficient: composting, soil reclamation, crop rotation and simplest of all, growing a kitchen garden so that if all else fails, the farmer-family will have food to eat. Compare this with the farmer suicides that have been making headlines.

Vanaja and her colleagues are passionate about educating consumers who are blissfully unaware of the thousands of rice varieties that have been lost. Today, much of urban India eats two, maybe three, varieties: sona masoori and basmati. Buying organic foods and grains such as those marketed by the Green Foundation’s Nisarga foods will incentivize farmers to cultivate rare varieties which, after all, are the spice of life.

There are many ways of contributing. Simplest of all is to do what the Quran preaches: allocating a portion of your income to good causes. That is my method. I love my job. I assuage my guilt by contributing a small portion of my income to causes I believe in. Nobler still is taking on one area and trying to effect change. Setting up a school in one’s ancestral village and educating generations of children is laudable. Noblest of all is embracing another person’s pain or need and making that your life’s work. My college mate Vidya Reddy was a bouncy, fun-loving senior at Women’s Christian College. She comes from a pretty wealthy family and was known for her infectious laugh and irreverent ways. Today, she has taken on an area where most of us fear to tread: child sexual abuse. She runs Tulir, a Chennai-based non-profit organization dedicated to the prevention of child sexual abuse (http://www.tulircphcsa.org). Vidya told me that she has rescued children from as far away as Afghanistan. What motivates the partying Vidya that I remember to wade through the grunge of human depravity? What keeps her sane? Why does she do this?
Tulir, Goonj, Unnati and the Green Foundation are not charity as the socialites would have it. They are not about fund-raising feel-good glamour. They are about wading through mud, sweat and tears; about grunt work and never giving up. But in the end, they offer the highest reward that I can fathom: They uplift lives; sometimes forever. And in the end, isn’t that what we all aspire to—in our jobs, relationships and life? We want to influence; we want to effect change. Screw the politicians. For my money, I’d bet on these organizations.