About A Pet. Inji darling. RIP.

About A Pet. Inji darling. RIP.

A very very hard piece to write.  I wrote reams of prose and then rewrote it countless times.  This has been in the works for the last four months.  Finally worked up the nerve to send it and have it published.  Not going to show it to my kids.  Don’t know if they can handle it.  Luckily, one is on a school trip and the other doesn’t read my column.  Here is the link to Mint’s page.  Pasted below is my longer version, which needed to be cut for space. 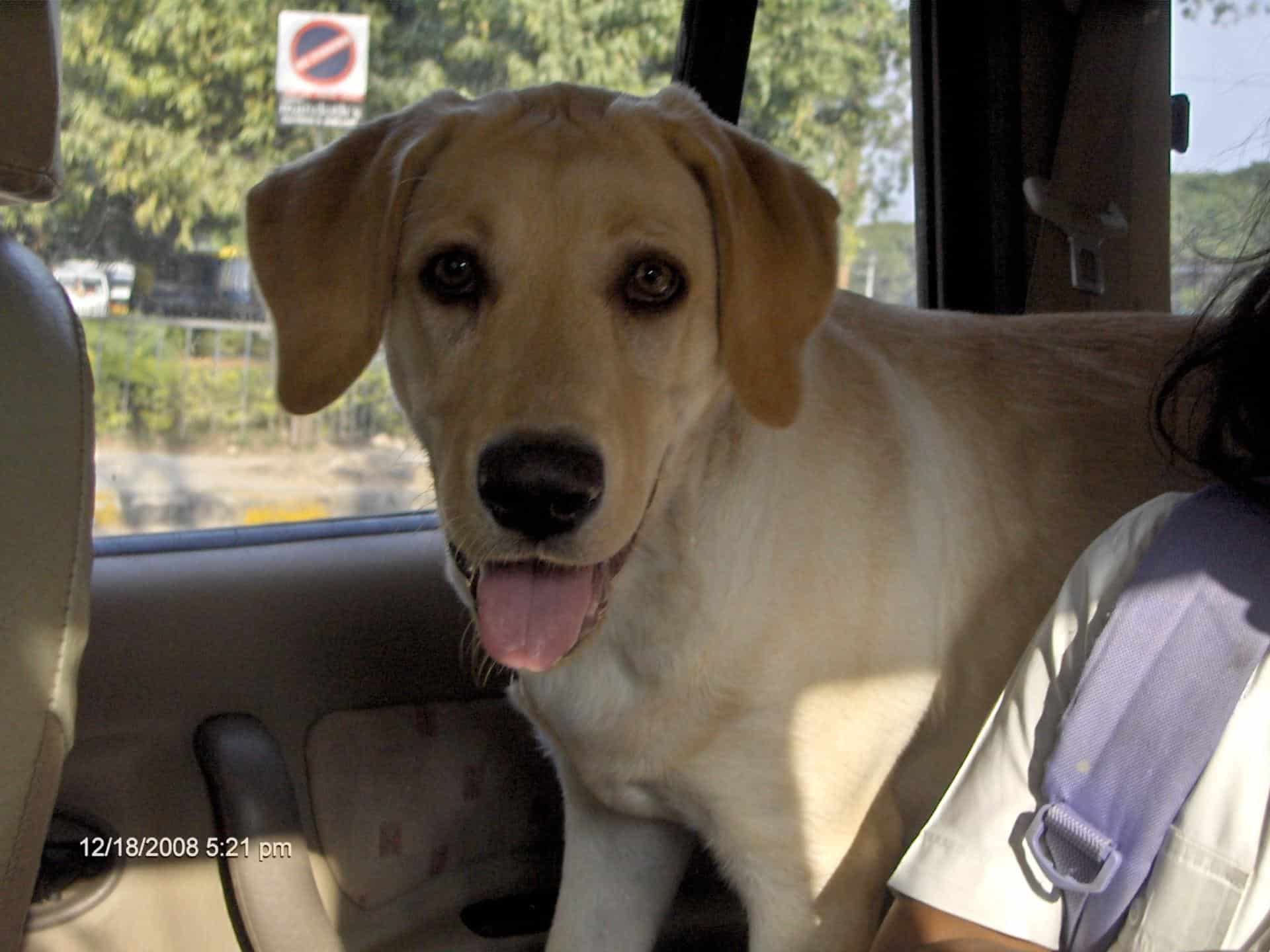 The night before my dog, Inji, died, she and I lay beside each other on the orange couch in our living room.  She didn’t shut her dilated golden eyes the whole night and neither did I.  Too weak to move after a month of not eating, I watched my beautiful beige Labrador with her still-silky coat suffer spasms all through the night.  The E.Coli infection that had eaten through her kidneys had finally lodged inside her brain.  The shivering that had started six weeks before turned into violent paroxysms.  Let go, child, I whispered to her, as she drooled bile and saliva; as her body rattled so hard I could hear the emptiness inside.  I wanted her to die; I wanted the decision not to be mine.  Her eyes never left me, even as I went to get her some water from the kitchen—water that spilled off the sides of her mouth.  Was she scared? I don’t know.  I was.

You want to know about grief.  Let me tell you about grief– not the spousal grief so beautifully captured by Joan Didion in her book, “A Year of Magical Thinking.”  This grief is the kind that is felt by a whole family that watches a beloved pet lose life’s last battle.  Grief is about spending six hours a day at a vet’s clinic, watching a once-frisky dog lie still on a metal stretcher and get two bottles of ringer lactate solution mixed with penicillin, B-complex, Vitamin C, and a cocktail of drugs.  The sound of grief is the drip of drugs, muffled sobs and incoherent prayers.   It is the smell of antiseptic mixed with urine.  Grief isn’t one emotion.  It is shock, rage, bitterness and incessant questions.  Why me? What’s a good way to die?  Streaming tears interspersed by a tidal wave of sobs that the body cannot contain.

My dog, Inji, was just three years old.  The word means ‘ginger’ in Tamil.  I wanted an Indian name; my kids wanted to call her “Laika” after the first dog in space.  She ended up being Inji Laika Narayan.  She was a healthy happy Labrador who liked to eat– not the sort of dog to contract a life-threatening illness? But then isn’t that what all parents (and that’s really what I was to my dog) say when their child succumbs to the “lethal march” of an illness that never stops?

The entire span of her illness was six weeks.  Was that too short a time; or too long a time to watch her suffer? Was it good that her illness gave our family time to adjust? Or would it have been better if she had suffered a stroke and died the next day without suffering? I can tell you that there were days during that long month when I woke up in the morning, dreading the sight of her tired, prone body that didn’t have the energy to jump up as she once did.  But still her tail wagged.  Although I am ashamed to admit it now, I occasionally wished that Inji would die in her sleep, relieving me of decisions about drugs that didn’t seem to work; freeing me from days and nights at the clinic.  After several weeks of this bleak routine, I just wanted the whole thing to be over.  Not my husband.

People react in different ways to health crises.  You learn new things about your spouse and children.  I learned that my husband who didn’t even like Inji as much as I did would never give up on her.  He was like a maniac—going on the Internet to discover new medication for chronic kidney failure in dogs.  He consulted four vets (one in America) about urine cultures and blood reports.  That’s when our fights began.  We argued over medical protocols and dropping creatinin counts.  I wanted to let Inji finish her life at home, without needles, in peace.  He accused me of pulling the plug; copping out.  He never gave up.  Till one day he did and the next day, our dog died.  He is still grieving.  I seem to be over it; or so I tell myself during those moments when I feel Inji behind me as I boil milk in the kitchen.  I say this when I insert the key into my front door and feel my body tighten with pleasure in anticipation of the overjoyed welcome my dog gave me—tail wagging, body shaking from side to side.  I still smile when I open the door.  And then I stop.

That last fateful evening, Inji started frothing at the lips.  She hadn’t eaten for a month.  Towards the end, she stopped drinking water.  It was over, said the vet.  The infection had affected her brain.  That evening, we returned home from the clinic and followed the usual routine of calling four vets before deciding that the illness had won.  My husband conceded defeat and called my sister-in-law, Priya.

Every family has a go-to person for a variety of crises.  You call your Mom for certain things; your Dad for others; your siblings for something.  In our family, the pet-person is Priya.  She was the first person we called that evening.  She and my brother came over; and basically didn’t leave till we buried Inji.

Who are you? Are you the kind that grieves intensely and quickly; or does your grief take time to reveal itself and leave?  Does it ever leave?  In the days that followed Inji’s death, I told myself and everyone else in my family that I was over it.  As I watched the palpable grief in the people I love, I told myself that I was different from them; somehow stronger.  Not true.

Dr. Morton came over on Inji’s last morning.  We asked if Inji had a chance to recover.  He said No.  He said, “If I don’t anesthetize her now, she’ll be dead by tonight.  But she’ll be in pain the whole day.”  We briefly debated whether to pull the kids out of school, and ended up bringing my elder daughter back but leaving the younger one out of the whole thing.

At 11.30, my elder daughter put Inji’s head on her lap.  My mother poured Ganga-jal into her mouth.  Inji sipped it.  My father looked dazed.  Priya wept along with my husband.  My brother hugged me.  Our friend, Sriram– a dog lover who simply showed up as friends do in times of crisis—said, “Watch her eyes.  It helps you gain some closure.  So I stared into my dog’s eyes, watching for signs of pain or hurt.  Her eyes remained dilated.  Death would occur in a few seconds, said the doctor.  I saw the light go out of Inji’s eyes.  With my fingers, I closed them.

We drove in a motorcade to Kengeri, an hour outside Bangalore, where a wonderful organization called People for Animals, rescues wildlife that has been cruelly treated by humans and rehabilitates them.  They also have a pet cemetery in a woody knoll.  We buried Inji there with full honours and rites—four pallbearers, sprinkled rice, her favourite foods—milk, bananas, tuna– and a jasmine garland.

To those of you who are considering getting a pet, let me tell you my experience.  Having a dog in the house forced my husband and I to walk together every morning and every evening.  You can outsource that, but we chose not to.  It was the best 20 minutes of our relationship and it happened everyday.  Sans mobile and interruptions; free of the walls of our household and its chores, we enjoyed the morning sunshine, the relative quiet, and talked about news and world affairs; about trees and philosophy.  We met other dog-owners from within our community, and got to know our neighbourhood better.  We learned the rhythms of our street; we learned to recognize the street-sweeping ladies.  Having a dog impacted our kids but not always in pleasant, predictable ways.  There were many days when I said nasty, awful things to them in an attempt to goad them to do more doggy-chores.  “We should have never got this bloody dog,” I would scream, after Inji pooped in the balcony, or vomited in the bedroom.  I yelled at my kids to walk the dog and when they refused because they were watching “Masterchef,” I would curse and bang the door and take her down myself.  Having a pet often seemed like more work than it was worth.  But there were also tender moments when I caught my kids lying on the floor, curled into a ball with Inji.  When they came home in a bad mood; or when they cried, Inji put her head on their lap and made them feel better.  Every morning, Inji would come into the bedroom and our oxytocin levels would go up, simply because of her wagging tail and oh-so-beautiful eyes.  If you are considering a pet “for the children’s sake,” realize that it will not be idyllic.  But it will teach your children compassion.  Your child will suddenly notice other animals, birds, stray dogs, insects and trees and view them as an extension of your family—just like your pet.  Your child might refuse to burst Diwali crackers because she is worried that the rockets flying to the sky will scare the birds.

Not having Inji around has freed us in many ways.  When we are out, we don’t rush back home because the dog is alone.  We are able to travel freely, without making kennel arrangements and then calling from Pune and Shimla to check on our dog.  Weighing these tangible freedoms against the intangible pleasures of having a dog is difficult.  That is the exercise our family is engaged in as we process whether to have another pet.  This time, we are sure we want to adopt; but we are not sure about when.

If you define a well-lived life as having a variety of experiences, then definitely get a pet.  I have stared at death in my dog’s face and it isn’t pretty.  It haunts me to this day.  But it has also prepared me for other kinds of death.  I have also experienced the kind of love that even my mother or children cannot give me.  People who want to experience unconditional love should get a dog; but also be prepared to take it out to pee four times a day.

It’s been six months but I still miss Inji, our beautiful golden Labrador, every single day.

Shoba Narayan’s family is debating when to get another dog.  Two are ready to adopt one right now and two are not.