In the midst of a Kolkata Ferment

I feel like I am in a Bengali movie.

Wait, that’s too easy. I am in Kolkata, after all, at the top floor of Priya Cinema, which, according to some, is the hub of Bengali cinema.

I want a better simile. I email Bangalore-based film expert M.K. Raghavendra, who can describe a film as a “French noir courtroom classic in the tradition of H.G. Clouzot” and actually know what it means, and ask if there are any cult movies or directors whose styling is reminiscent of old Bengali movies.

“Only Japanese films perhaps. Maybe Mizoguchi,” he replies. “There is a ceremonial sense in the indoor sequences of his period films like Ugestu Monogatari and Sansho the Bailiff as there is in Ray’s Jalsaghar.”

Okay. Let me rephrase. I feel like I am in a Mizoguchi film.

The scene is the dim-lit drawing room of producer and actor, Arijit Dutta, whose family owns Priya Entertainment. Generations of Kolkatans grew up watching movies at his Priya Cinema. Sitting at stage left is national-award winning director, Aniruddha Roy “Tony” Chowdhury, who is sipping a single malt and spreading bonhomie. If he is stressed about next day’s shoot, he does not show it. Across him is gifted actor, musician and director, Anjan Dutt, who, with his beard, spectacles and absent-but-possible cigarette, looks as a polymath should. Near him is Srijit Mukherji, erstwhile economist, theater actor and director, who holds a stack of invitations for his “daughter’s wedding,” as he says—his film’s premiere, in other words. Beside him is Birsa Dasgupta, whose parents and grandfather were in films. He talks about Bollywood and Bengali films with the fluency of an insider, having worked with Anurag Kashyap and Imitiaz Ali. Actor Parambrata Chatterjee is the object of much teasing, thanks to his Dutch girlfriend. “How can a Bong patao a Dutch girl?” the others ask. In the middle sits Raj Chakraborty who says little but grins a lot. The others tell me that he is the most commercially successful director in the group. 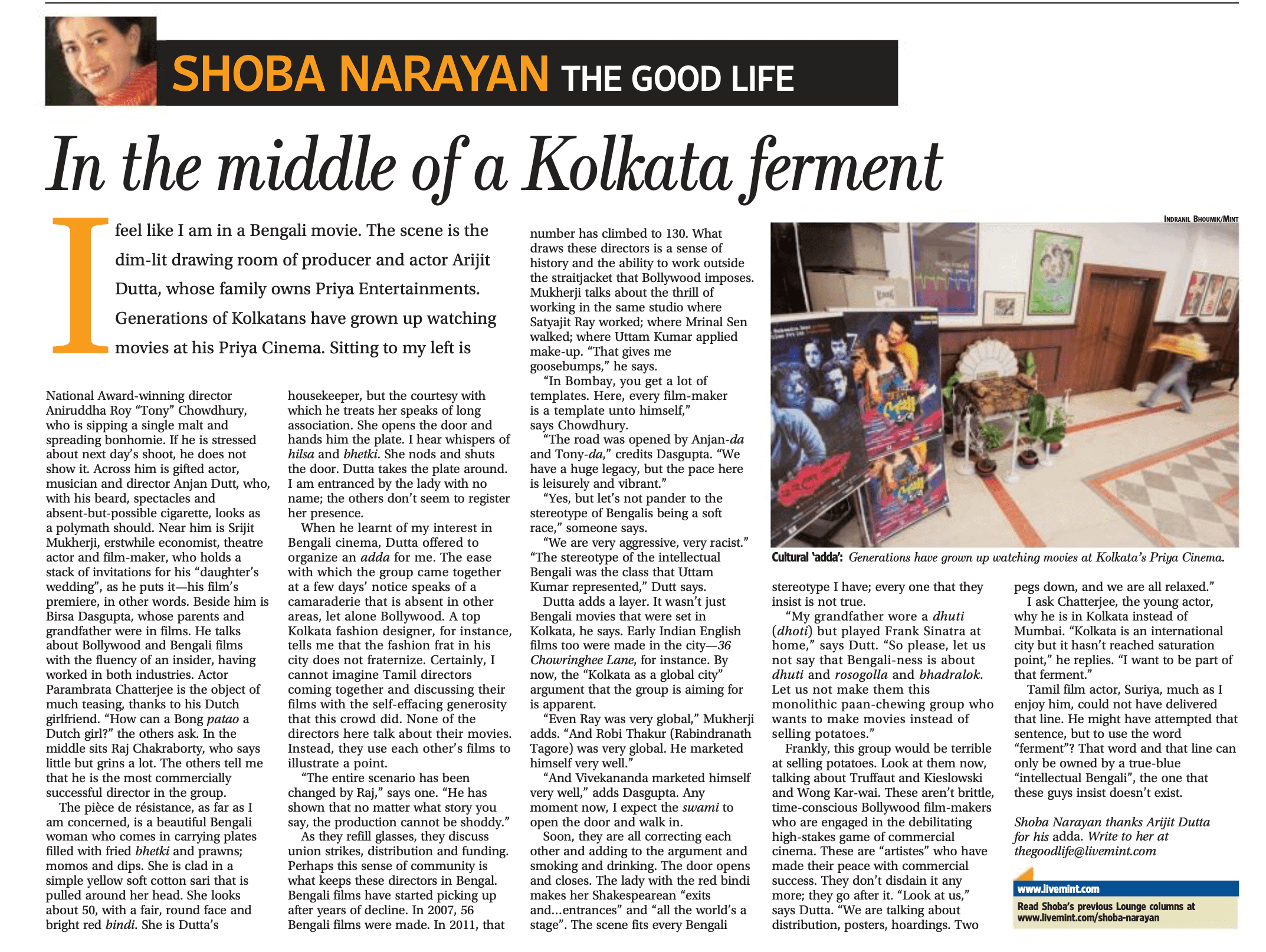 The piece de resistance as far as I am concerned is a beautiful Bengali woman who comes in carrying plates filled with fried bekti and prawns; momos and dips. She is clad in a simple yellow soft cotton sari that is pulled around her head. She looks to be about 50, with a fair, round face and a bright red bindi. She is Dutta’s housekeeper but the courtesy with which he treats her speaks of long association. She opens the door and hands him the plate. I hear whispers of hilsa and bekti. She nods and shuts the door. Dutta takes the plate around. I am entranced by the lady with no name; the others don’t seem to register her presence.

When he learned of my interest in Bengali cinema, Dutta offered to put together an ‘adda’ for me. The ease with which the group came together with a few days notice speaks of a camaraderie that is absent in other areas, let alone Bollywood. A top Kolkata fashion designer tells me that the fashion frat in his city does not fraternize. Certainly, I cannot imagine Tamil directors coming together and discussing their films with the self-effacing generosity that this crowd did. None of the directors here talk about their movies. Instead, they use each other’s films to illustrate a point.

“The entire scenario has been changed by Raj,” says one. “He has shown that no matter what story you say, the production cannot be shoddy.”

As they refill glasses, they discuss union strikes, distribution and funding. Perhaps this sense of community is what drew these Bengali directors back home. Perhaps as a result, Bengali films have started picking up after year of decline. In 2007, 56 Bengali films were made. In 2011, that number has climbed to 130. What draws these directors is a sense of history and the ability to work outside the straitjacket that Bollywood imposes. Mukherji talks about the thrill of working in the same studio where Satyajit Ray worked; where Mrinal Sen walked; where Uttam Kumar applied make-up. “That gives me goosebumps,” he says.

“In Bombay, you get a lot of templates. Here, every film-maker is a template unto himself,” says Chowdhury.

“The road was opened by Anjan-da and Tony-da,” credits Dasgupta. “We have a huge legacy, but the pace here is leisurely and vibrant.”

“Yes, but let’s not pander to the stereotype of Bengalis being a soft race,” someone says.

“We are very aggressive, very racist.”

“The stereotype of the intellectual Bengali was the class that Uttam Kumar represented,” Dutt says.

Dutta adds a layer. It wasn’t just Bengali movies that were set in Kolkata, he says. Early Indian English films too were made in the city—36 Chowringhee Lane, for instance. By now, the “Kolkata as a global city” argument that the group is aiming for is apparent. 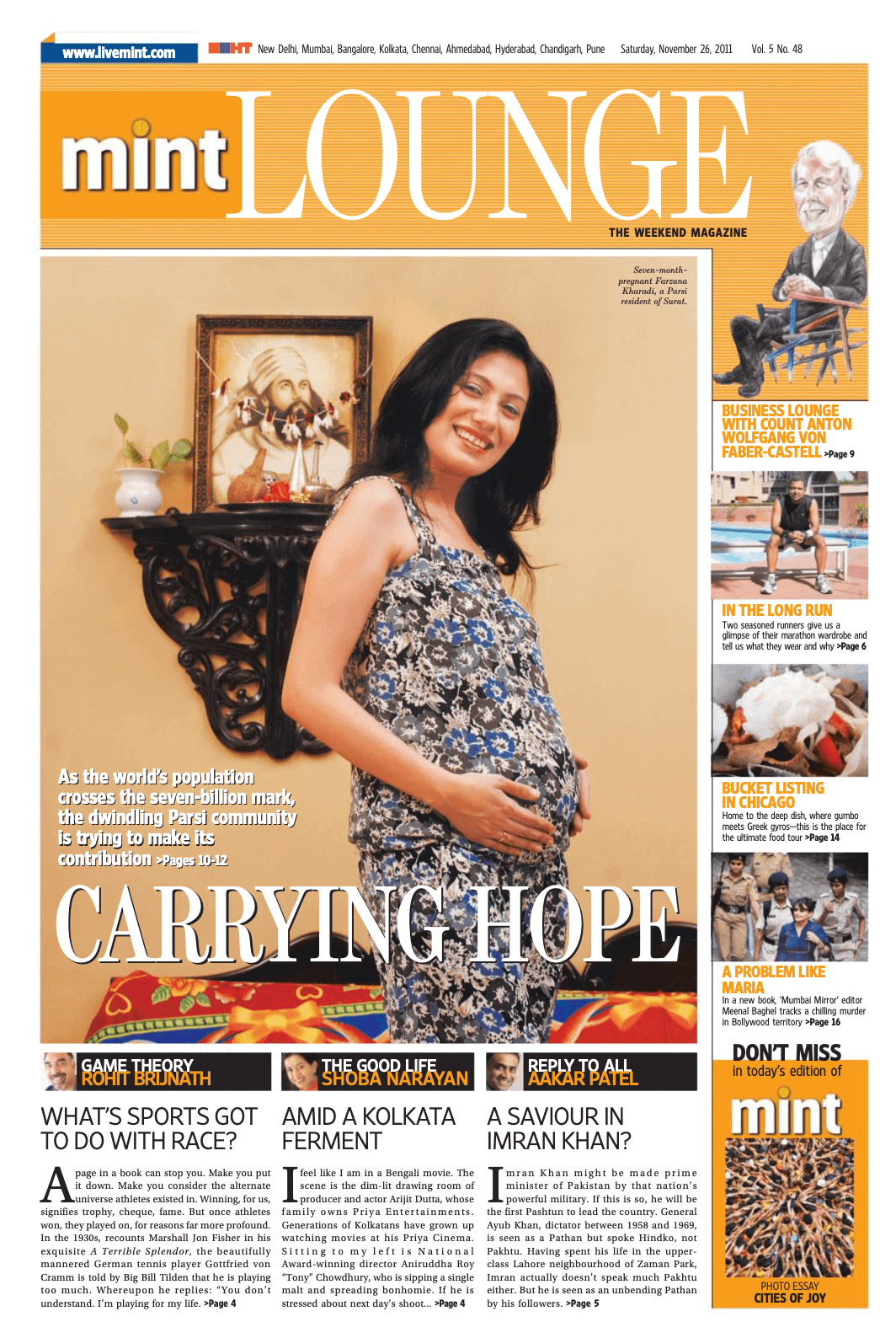 “And Vivekananda marketed himself very well,” adds Dasgupta. Any moment now, I expect the swami to open the door and walk in.

Soon, they are all correcting each other and adding to the argument and smoking and drinking. The door opens and closes. The lady with the red bindi makes her Shakespearean “exits and…entrances” and “all the world’s a stage”. The scene fits every Bengali stereotype I have; every one that they insist is not true.

“My grandfather wore a dhuti (dhoti) but played Frank Sinatra at home,” says Dutt. “So please, let us not say that Bengali-ness is about dhuti and rosogolla and bhadralok. Let us not make them this monolithic paan-chewing group who wants to make movies instead of selling potatoes.”

Frankly, this group would be terrible at selling potatoes. Look at them now, talking about Truffaut and Kieslowski and Wong Kar-wai. These aren’t brittle, time-conscious Bollywood film-makers who are engaged in the debilitating high-stakes game of commercial cinema. These are “artistes” who have made their peace with commercial success. They don’t disdain it any more; they go after it. “Look at us,” says Dutta. “We are talking about distribution, posters, hoardings. Two pegs down, and we are all relaxed.”

I ask Chatterjee, the young actor, why he is in Kolkata instead of Mumbai. “Kolkata is an international city but it hasn’t reached saturation point,” he replies. “I want to be part of that ferment.”

Tamil film actor, Surya, much as I enjoy him, could not have delivered that line. He might have attempted that sentence, but to use the word, “ferment?” That word and that line can only be owned by a true-blue “intellectual Bengali,” the one that these guys insist doesn’t exist.

Shoba Narayan thanks Arijit Dutta for his adda. She wishes she could return the favor, but sadly, the Kannada film industry comes together to support alleged wife-beaters, like the actor, Darshan.

Thank you M K Raghavendra, for the line about Mizoguchi, that I couldn't fit in due to space constraints.   Thank you, Ghoshi, for the introductions.