Bonda Soup, where the bowl matters: for Mint Lounge

Bonda Soup, where the bowl matters: for Mint Lounge

Still bummed that I didn’t go to Ayodhya in Mangalore for typical Mangalorean food.

The bowl matters as much as the soup 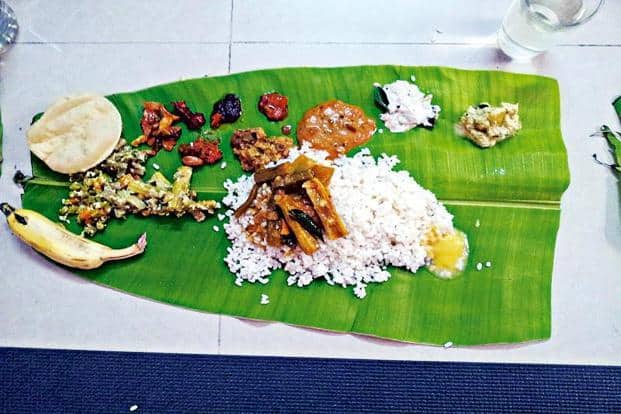 I grew up in a home where we ate on stainless-steel plates. My grandmother’s idea of a festive dinner was to lay banana leaves on the floor and have a small army of topless dhoti-clad men race down serving spoonfuls of various dishes in a prescribed order: first payasam (kheer), then paruppu (dal), then pappadam , then pachadi (raita). Then came an array of dishes that are pretty much untranslatable— kootu , avial , olan , kaalan , kosumalli —and pretty much inedible according to my husband. If you were lucky, the meal would include an “English vegetable” such as potato or plantain fry. By the time you opened your mouth to ask for a second helping of plantain fry or whatever it was that your heart longed for, the bare-torsoed men had scurried to the end of the banana-leaf line. The men had names, surely, but we didn’t know them.
The “mama” or “maharaj” in charge had a bulbous stomach shaped like a ghatam. If we dared to ask for seconds, he would glare at us for a second before yelling, “avial vaa”, which was akin to saying “chorizo, vamos” in Spanish. I think this is the reason that restaurant menus got more and more complicated with the description of the dishes—because they don’t have a top-dog “maharaj”, referring to servers by the names of their dishes.
Can you imagine the maître d’ at Noma or The Fat Duck calling a waiter by the dish he is serving? “Oy! Shaved cod with grilled steak tartare served with toasted areca nuts and passion-fruit purée. Come here and serve this chit of a girl who is eating as if she has escaped a famine.”
When we met as a family, food was served on the dining table with a hearty dose of “feed you till your stomach bursts” type of hospitality. This essentially meant that there was no conversation; only incessant questions: Do you want more potatoes? How do you find the dal? Is there too much salt in the biryani? So you ate like a duck, quacking “yes” or “no” to the questions that were thrown at you from grandmother, mother, and every sundry aunt that was hovering around the table, serving us all. Interspersed with the questions were constant accusations: “What do you mean, you don’t want more sambhar? Are you sick?” was the most frequent, accompanied by a frown and a glare.
My family viewed food in a complex way. Food was utilitarian—you ate for sustenance. Mealtimes had that hurried feeling of “eat quickly so we can get this meal over with and move on to the next”. It was an expression of aggressive love—you ate because the women in your life would be insulted if you didn’t. It was a competitive sport—you ate because there was a finite amount of your favourite dish and you had to eat as much as you could before your 20-odd cousins could.
It was a delicate balancing act that occurred in between the times the bai (maid) would show up to wash utensils. It was a connection—quite literally, since Indian women are prone to rolling rice-balls and sticking them into the mouths of the non-eaters. If you didn’t eat, it wasn’t because you were full. It was because you were sick. And then you were force-fed Horlicks with bread.
Food was a calling card; a brand identity. Savita maasi’s mango pickle versus Dimple aunty’s lemon relish; Kanti bua’s Goda masala mix versus Shetty aunty’s chicken ghee roast mix. Now we just go to Thom’s Bakery and Supermarket and buy Everest garam masala sans provenance or pride. Women identified themselves with certain dishes. They still do. Entire weddings were centred around the arrival of the Sridevi-like character in my family who made divine laddoos. Saralamami wasn’t as pretty as Sridevi but her laddoos looked better than the ones in English Vinglish and led her to deliver love masked as a threat: “What, you don’t like my laddoos? Why are you eating only four of them?” Accusations and badgering till you hung your head in defeat and masticated without a word.
When I lit a candle on the dining table after returning from the US, my entire family thought that I presaged a power cut. “How does she know when Amma (J. Jayalalithaa) will turn off the power?” they murmured and stared at me with wonderstruck eyes. When my extended family and I gathered for annual vacations in Coimbatore (my Mom’s side) or Kottayam (my Dad’s side), their idea of a fancy dinner was to go to Annapoorna or Aryaas, and have masala dosas with flies on the side. As for conversation, you stared dourly at the sour waiter and willed him to serve you more red chutney. I tell you this as background for what I am about to reveal. My aunts were wrong; my parents were wrong; and my grandmother, whom I adored as a child, was more wrong than them all. Accoutrements matter. Utensils matter.
What you eat with is as important as the dish you actually eat in—and I say this after eating food without caring about where it came from. You can eat a bonda-soup from Mangaluru but equally important is the dish from which you eat it. I have no connection to Arttd’inox or Magpie design, but if they priced their stainless-steel dishes more reasonably, I would eat my bonda-soup from their bowls.

Shoba Narayan enjoys the Shetty’s chicken ghee roast powder that she purchased in Mangaluru at Sri Sai Condiments. She coats her paneer with it. Write to her at [email protected]