How to balance multiple readerships is my challenge.
Wine one week; heritage conservation, the next; and wildlife, the third. How to make wine glasses palatable for the activist so that they don’t dismiss it as frou-frou?
I often think of narrowing down my writing to one topic. Just can’t figure out which one will sustain my interest. 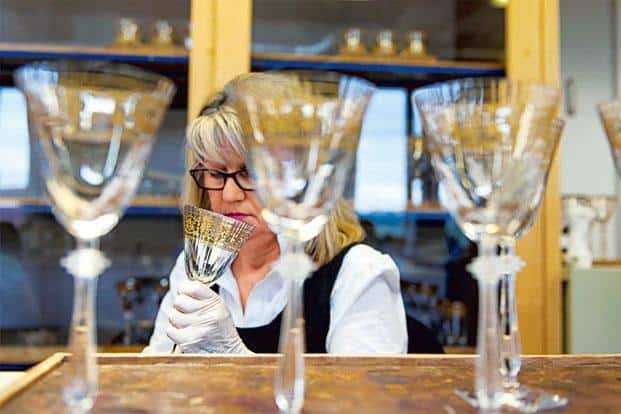 A goblet being gilded at a unit of Baccarat in Nancy, France. Photo: Jean-Christophe Verhaegen/AFP

Anyone who has stayed in a hostel has a resource-constrained mindset towards food. I don’t care which college you went to. Standing in line and waiting for a finite amount of food does something to your psyche. It makes you think of food, not as a pleasure to be had, but as a resource to be grabbed. It has taken me several decades to get out of this mindset.
I write this as I drink a 2011 Chateau de Fontenille from a wine goblet with a curvy bottom that is shaped like Jennifer Lopez’s—there is no other way to say this—flight path if she were sitting on a boomerang. The wine is golden in colour and goes straight down—like the Congress party. It is available in Bengaluru for about `2,000 and is a blend of sauvignon blanc, sauvignon gris, muscadelle and semillon.
The best part of this wine is that the grassy acidity of sauvignon blanc is hidden, or at least balanced, by the other grapes. I have not had a sauvignon blanc that I like in years. Friends have been raving about Charosa’s version but I haven’t tried enough of their wines to agree. I don’t like sauvignon blanc’s herbaceousness. If I want that taste, I’d rather eat ajwain (carom seeds).
The wine is from the lesser-known area of Entre-Deux-Mers, between the Garonne and Dordogne rivers in France. I have a case and enjoy it with the manchego cheese that my friend, Phyllis, brings for me from the Whole Foods Market in New York.
The main point of this passage is not the wine but the fact that I am drinking it from a glass that I love. As a college student, if you had told me that people would pay good money for dishes from Rosenthal, Noritake, Villeroy & Boch, and Versace, I would have sputtered out the hot hostel bondas that were served on greasy, grainy stainless steel plates with a side order of a scowl.
Behavioural economics has shown that the environment in which you eat matters just as much as what you eat. A study conducted by Cornell University’s Food and Brand Lab enlisted an actress who would wear a fat suit and dine with fellow students. The study discovered that people do eat more when they are with heavier people. Moral of the story: When you go out to eat, sit with a thin friend.
Does drinking wine from a pretty glass make the wine taste better? I was about to find out.
My wine glasses are in a state of flux. As newly-weds, we bought Baccarat crystal glasses, which got destroyed on one memorable evening when my husband and I threw them at the wall to… check if they would bounce. When the children were little, we bought pewter glasses from Royal Selangor in Malaysia. They look like Roman amphora now, after many washes in the dishwasher. This year I decided to get a whole new set that fulfilled a specific criteria: They had to look good and feel good; and not be so expensive that I would un-friend those friends who broke my wine glasses. That meant removing Bottega del Vino, Schott Zwiesel and Spiegelau from the list; not that they are easy to get in India.
The glasses I bought are by a Thai brand called Lucaris. I bought a set of six at HomeStop for under `4,000. The wine glasses from the “Tokyo Collection” are expansive—not expensive. They are better than Riedel which, in my view, has become an overexposed brand. When you can walk into a Macy’s at Tyson’s Corner Center mall in the Washington, DC area, or at 1MG Road in Bengaluru, and buy Riedel glasses for 50% off, then you know that the brand, which once marketed itself as exclusive, is actually not.
I know wine tumblers are all the rage, but I think they were designed with breakage in mind rather than the beauty of the glass itself. A tumbler doesn’t give me the feeling that I am drinking wine. It’s like drinking filter coffee in a cup. It may serve the purpose but it just ain’t right.
Being south Indian, I’m not as finicky about chai. I know that it perhaps tastes better in a kulhar, but I like drinking my green or masala tea in thin, clinking China cups, with a pretty glass teapot that has an infuser in the middle so that you can see the beautiful tea liquor turn golden. Pour the tea into a glass cup the way the plantation folk do it and you can enjoy your tea in a way that “Nair, single tea,” will never equal.
I have gone from being a utilitarian diner to a finicky one, especially as far as the serving ware is concerned. It had to happen of course. I grew up eating on banana leaves where you had to build dams out of white rice to protect the rasam from running over. There is a charm in that. But there is nothing wrong with the plates that Thomas Keller has designed (I think the Taj group has them in its New Delhi restaurant), pretty linen napkins, sleek cutlery or silverware as the Americans would have it; and wine goblets that curve like a certain part of the anatomy.

Shoba Narayan drinks Kusmi tea from a translucent teapot. Write to her at [email protected]