I am in large part– my father. As a child, they say I looked like him. I have his metabolism and constitution. He belongs to the astrological star, Swati, which they say, has a personality called “sabdeekam” or softness. This came in Mint

Make your father’s day
How will you celebrate your Dad tomorrow?
Shoba Narayan
First Published: Sat, Jun 15 2013. 12 02 AM IST 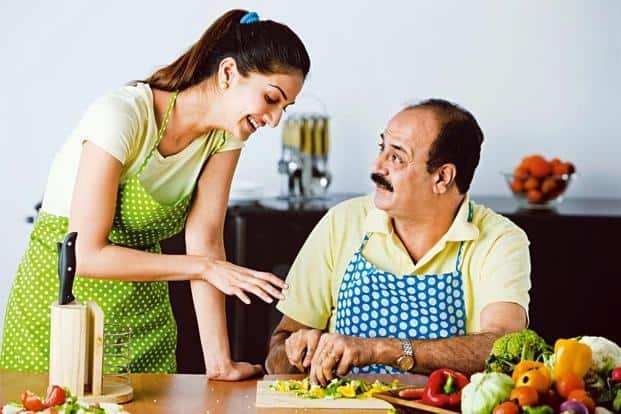 Tomorrow is a day that will celebrate men who arguably have the coolest jobs in the world: our dads. Ok, that was a lame attempt to link this column to this issue. Dad, Dada, Papa, Pa, Appa, Daddy…what do you call this man? If you are a daughter, this is the man who first smiled admiringly at what you did, etching in your mind the first glimmering of male admiration. Recall the first moment when you wore a pretty frock and walked shyly to show it off to your parents. Recall the gleam in your father’s eye.
Fathers and daughters share a bond that is both tight and intangible. Fathers are the men who teach daughters what it feels like to be adored. They are—usually—the patient counterpoint to the intense drama created by over-invested mothers and cranky siblings. When your brother or sister competes with and denounces you; or when your mother nags you for the nth time. Against this chaos sits the patient bulwark that is the father—reading his newspaper, peering above it absent-mindedly to answer a question that he hasn’t really heard, sipping tea or coffee, saying little but setting the tone, being the stern, silent disciplinarian who may eventually provoke a revolt.
Fathers define daughters’ choices of mates. If yours had a bad temper, chances are that you chose a man who doesn’t yell. Think about it: Your husband is either a carbon copy or the opposite of your father, broadly speaking. This is the insidious effect of fathers on the female psyche.
If you are a son, your father is the man you joust and compete with; the man you look up to and measure yourself against. Fathers and sons have complicated relationships. Sigmund Freud would have you believe that it is because you are competing for the affections of the same woman, that is, one man’s wife and another little-man’s mother. That said, some fathers and sons play ball together and run away from the same woman who rules their lives. They gang up against mom and take comfort from being in the same team. Fathers provide the template from which sons spring. Everything that they do and become springs from variations of this theme.
How will you celebrate your Dad tomorrow? If your father is above 70, chances are that he won’t want very much. “We are downsizing,” he’ll say. What do you give a person who has everything and doesn’t want anything? How do you show you care?
My sister-in-law in Florida came up with an ingenious gift. She decided to sing 82 songs for her father over the course of the year. She sends them as MP3 recordings by email and her Dad listens to them.
In order to be successful, gifts require thought, timing and appropriateness. Here is a list of suggestions if you are stumped for ideas this Father’s Day.
u Take your Dad out to lunch. Cliché, I know, but when is the last time you did it? Just you and him. Every parent I know longs for a connection with their children. Give your “Baba” the gift of your scintillating (or not) company.
u Make him a compilation of some sort: music, a photo collage, or a collection of your Papa’s favourite things, either actual or symbolic. If your father likes golf, put a golf ball into the gift basket. For any parent, knowing that your child understands you—gets you—is profoundly satisfying.
u Take a trip together. It could even be a day trip. You may think that you know everything about your father. But a new situation (or place) can change things; throw elements of surprise into a relationship that you both take for granted.
u Buy something that you know your father won’t buy for himself, be it a Montblanc pen or a Louis Vuitton messenger bag. This is the gift-as-splurge principle and you’ll be surprised at how often it works.
u Take lessons together. If bonding with your father is too difficult and awkward, this is a good way to spend time together without getting on each other’s nerves.
u Enable your father just as he did for you. If he has been talking about going to Mecca for years, help him achieve this goal. If he wants to see the Himalayas, maybe charter a flight over the mountains. If possible, go with him.
u Make your Dad’s dream come true. If he is a lifelong Kishori Amonkar fan, take him backstage when she comes to town. Hard to do, but what a gift.
u Do something for your Appa that he doesn’t like to do. It could be as simple as cleaning up his closet, or enrolling him in a gym. Your Mom will thank you for this.
u To paraphrase an old quote, we live in a time where everybody knows the price of everything but the value of nothing. Give gifts that have no connection with price. Write a poem, draw a portrait, show Dad a rainbow, buy him vitamins, give him a hug every day, or simply listen. When Dad comes to visit, stop everything and sit down with him. You may be surprised to hear what he says; what he is thinking about.
Shoba Narayan’s daughter’s father would love backstage passes to Wimbledon or Wembley.
Also read | Shoba’s previous Lounge columns
First Published: Sat, Jun 15 2013. 12 02 AM IST