The Sexes– again for The Atlantic

The Sexes– again for The Atlantic

As a Hindu, I often think that if I wanted to choose another religion to follow, it would be Buddhism—and not just because I might get to hug Richard Gere. The Dalai Lama’s recent comments in Australia about how his successor could be a woman only added light to my eyes, and made me exhale into a perfect Lotus pose.

Speaking at a press conference, the exiled 78-year-old leader, suggested that women were better equipped to lead the world in the current time. “If the circumstances are such that a female Dalai Lama is more useful, then automatically a female Dalai Lama will come,” he said.

His Holiness Tenzin Gyatso was then asked about the bitter gender debate that is permeating Australian politics. Prime Minister Julia Gillard has been accusing her opposition Liberal Party of being sexist and removing women from the political sphere. Earlier this week, a menu for a Liberal Party fundraiser was leaked on social media. It carried the line: “Julia Gillard Kentucky Fried Quail: small breasts, huge thighs and a big red box.” The chef who created the menu called it a joke that never made it out of the kitchen. He said that the opposition leaders had not seen the menu. Ms. Gillard called the menu “grossly sexist and offensive.” The menu has gone viral and evinced reactions all over Australia. “Even when women ARE at the table, we’re still on the menu,” tweeted a woman in response.

The Dalai Lama responded to the gender question by referring to rising economic inequality around the globe. The world, he said, needs leaders with compassion. And in his mind, that means the world needs more female leaders.

“In that respect, biologically, females have more potential,” he said. “Females have more sensitivity about others’ wellbeing … In my own case, my father, very short temper. On a few occasions I also got some beatings. But my mother was so wonderfully compassionate.”

This is where I lost him. Are women truly more compassionate than men? In responding to the sexist saga that has Australia all a-twitter, is the Dalai Lama himself being sexist? 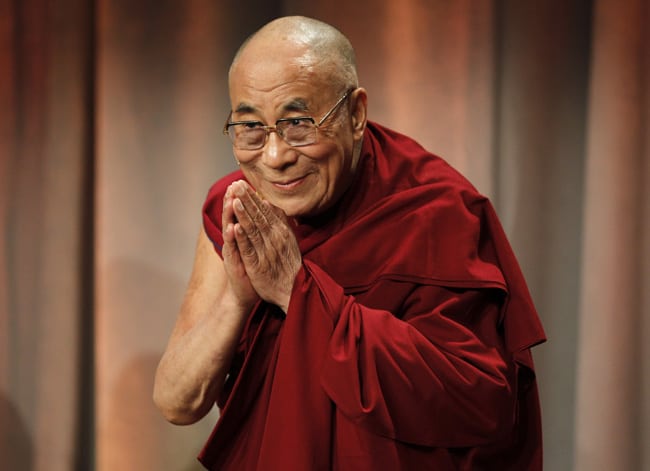 (This is the problem with us feminists: we bristle. People pay us a compliment—heck, the Dalai Lama pays women a compliment—and some of us, me included, take it amiss. He calls us compassionate and we call him sexist. But even if you take the Dalai Lama—given as he is to simple, playful remarks—out of the equation, the question remains: are women more compassionate than men? )

Research is both fascinating and conflicting on whether women are more compassionate than men. In 1958, Harvard psychologist, Lawrence Kohlberg wrote his dissertation on what would come to be called Kohlberg’s Stages of Moral Development. In it, he posited that males are morally superior to females because they scored higher on tests that measured impartial justice and equality. His research was considered groundbreaking at the time and continues to be widely cited. Kohlberg’s conclusions were challenged by his student, Carol Gilligan, who suggested that morality and ethics are based on gender and culture. Gilligan’s research posits that ethics follow two parallel paths: the justice perspective and the care perspective (no prizes for guessing which sex has which). In her 1982 book In a Different Voice, described by Harvard University Press as the “little book that started a revolution,” Gilligan suggests that people with the justice perspective (mostly men) base their ethical decisions on impartiality, fairness, rights, and justice. Those with the care perspective base their ethics on care, compassion, and empathy. Gilligan says that most people will base their choices on either one of these perspectives even if they are aware of both.

Other research suggests that women are socially compassionate but morally traditional. A 2005 study, for example, found that women would support legislation that would reduce income differences but would also oppose the legalization of marijuana. Chinese martial arts movies would have you believe that it is all a matter of perception. Men are compassionate but are not taught to show it. Instead, they are encouraged to hold it all in even if they can empathize with the other party. Last year, British ethicist Roger Steare, who has administered the “Moral DNA test” to over 60,000 volunteers in 200 countries, concluded that women make decisions based on how they impact others—”which tends to produce better decisions.” Men, concluded Steare, are more self-interested.

Despite all the research, or perhaps I should say, in spite of all the research, what is important is the qualities of the leader in question. So yes, let us advocate for more female leaders because that is what is fair. But we should also be advocating for more compassionate leaders, whatever their gender.

SHOBA NARAYAN is the author of Return to India: A Memoir.

The thrill of being a beat reporter at a newspaper is to turn in copy and have it up in a few hours. Last night at about 8 PM, I saw this piece about the Dalai Lama. Pitched it to Eleanor, my editor at The Sexes. She approved it within minutes. Wrote it in two hours. She edited it in an hour. And it is up.

Column writing takes away that immediacy but offers carte blanche with respect to voice and content– that is its thrill. I write my Mint column about two weeks in advance and The National column about ten days in advance.

Should read Carol Gilligan’s work. Hadn’t known about it at all.

The comments are interesting.

notbobcousy • 6 hours ago
This is the problem with us feminists: we bristle. People pay us a compliment—heck, the Dalai Lama pays women a compliment—and some of us, me included, take it amiss. He calls us compassionate and we call him sexist. But even if you take the Dalai Lama—given as he is to simple, playful remarks—out of the equation, the question remains: are women more compassionate than men?
I think most feminists don’t bristle at ideas like women are more compassionate. I often hear feminists say things like “if women ran the world there’d be no wars”, or wax on about the supposed positive virtues of women, and I hear little pushback from feminists against such statements. In the case of the Dalai Lama, these comments will probably go unnoticed by people who would write volumes on it if the Dalai Lama said men were better in some way.

It’s also worth pointing out the Dalai Lama is a feminist, and I guarantee that in saying women were more compassionate, he saw himself as making a feminist statement. Stephanie Meyer recently said she was a feminist because she thought the world would be a better place with women, and while people criticized her, it wasn’t for that statement but because people felt her novels don’t reflect feminist ideas.

To me, what he said is a feminist statement. I just am skeptical of it (at the least, if you think women are better at men at being compassionate, you oughta conclude that men are better on some other personality traits. I see it as nature vs nurture, and if you agree with the studies saying women are inherently more compassionate, there’s probably similar studies ascribing positive traits to men over women. But many people, feminists included, seem to agree with such statements when it’s something positive about women, disagree when it’s positive about men).
2 •Reply•Share ›

CJ Anton • 4 hours ago
What a crock. Compassion wasn’t needed before now? We only just recently discovered this fabulous compassion allegedly possessed (mostly) by women? Very solid of the DL to say it would be cool with him if, thousands of years in, a woman got to take the top job in Buddhism. Good luck convincing the monks.
2 •Reply•Share ›

CAinDC • 4 hours ago
You really are stressing the age thing! “Speaking at a press conference, the exiled 78-year-old leader, who is 78, ”
1 •Reply•Share ›

Eubie • an hour ago
Perhaps it would have been more relevant to reference the economic research on altruism, which shows that men tend to be more generous when generosity is less costly, while women tend to be more generous when the costs of generosity are higher [http://econ.ucsd.edu/~jandreon…] . And, this research result is further muddied when expectations of payback are factored in, leading to a finding that men and women are about equally altruistic [http://mpra.ub.uni-muenchen.de…]. The problem with the Moral DNA test is that it involves self-reporting, notorious for its strain on reliability.