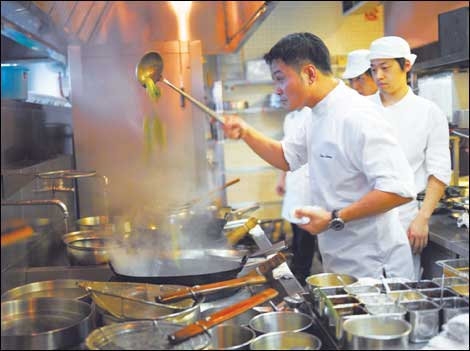 This piece appeared some time ago but I forgot to post it. Friends visiting Singapore reminded me of it.
Click here to read the piece in FT.

It is usually after the hickory-smoked wagyu beef cheeks with truffle-mashed potatoes that diners at Iggy’s in Singapore demand to meet the chef. By then, they have been dazzled by the savoury crab-meat soufflé, the cauliflower mousse, and the foie gras crème brûlée. Then, Akmal Anuar comes out. A local boy, he serves dishes that would not seem out of place in New York, Paris or London.

After the Miele Guide and Restaurant magazine anointed Iggy’s the best restaurant in Asia last year, ahead of Joel Robuchon’s Hong Kong outpost, this cosy European eatery at the Regent hotel has had its share of carping. Critics dismiss its truffle overload; and, honestly, does a wagyu beefburger require a white-truffle sabayon? But in this wealthy island-state with its abundance of good restaurants, few walk the tightrope between innovation and excess with as much finesse as Iggy’s.

Singapore’s high-end restaurants used to import chefs from Europe, Australia or Hong Kong to run their kitchens. This resulted in some good, albeit tortured, food as French chefs tried to duplicate winter dishes like beef au poivre in Singapore’s tropical climate. Anthony Bourdain joked that the soul of Singaporean cuisine lay in its hawker stalls and rojak (mixed up) food.

Not any more. Quietly and without much fanfare, Singapore has experienced a culinary renaissance of sorts. Gifted Singaporean chefs – such as Galvin Lim at Au Jardin, Christina Ee at Broth, Yong Bing Ngen of The Majestic, Jusman So at Sage, Sebastian Ng at Ember, Michael Han of 53, or Devagi Sanmugam at Spice Queen — have blossomed on their own turf.

Arguably, the big daddy of them all is cookbook author and TV personality Sam Leong. I meet Leong at My Humble House, a stunning restaurant near the Esplanade complex that serves modern Chinese food. While the menu descriptions are over the top – pan-seared fillet of giant grouper with ginger reduction is called “Sauntering among the Golden Leaves” – the food, mercifully, is simple and flavourful. “Traditional Chinese dishes are presented in a mess,” says Leong as dessert appears. It looks like a Chinese watercolour painting. There is a bonsai-type cliff surrounded by dry-ice engineered mist.

In a previous job at the Four Seasons, Singapore, Leong began innovating. “Everyone hated it,” he says. “The staff hated it because plating dishes was more work than serving family-style. Worst of all, the diners hated it. I would take such pains to debone and present the fish and they’d scream, ‘Where’s the head, where’s the tail?’ They thought I was cheating them.”

Milind Sovani hopes to do for Indian food what Leong has done for Chinese. A Brahmin who eats “everything from frog’s legs to crocodile meat”, Sovani, 45, created exciting Indian dishes as executive chef of sister establishments Rang Mahal and Vansh. He now runs his own restaurant, Song of India, set in a renovated black-and-white mansion near Orchard Road.

Well-travelled Singaporeans who enjoyed the food and wine culture abroad wanted it back home, and it helps that Singapore is open to imports. The Les Amis group of restaurants ships in Parma ham, wagyu beef and Australian wine for its 12 high-end restaurants in the city. Having dined at all of its outlets, I am partial to Au Jardin inside the Botanical Gardens and La Strada, which is headed by one of Singapore’s few female chefs, How Poh Poh.

But the restaurant I am most excited about is Les Amis’ latest venture, 53. Chef Michael Han interned at The Fat Duck and L’Enclume in the UK. Located in a pre-war building on Armenian Street, 53 has dishes that sing: Han’s poached chicken breast glazed with apple-parsnip foam, served on a pinenut and peanut puree as a nod to local satays, is reason enough to get on a flight to Singapore, wherever you happen to live.