Stereotypes interests me.  Perception too.  What image do you have when you hear a person’s voice? Or read their work? How does this match up to reality?

It was a real delight to meet this young Radio Jockey and hear her candid views.  In Mint.

In search of a unique Islamic identity 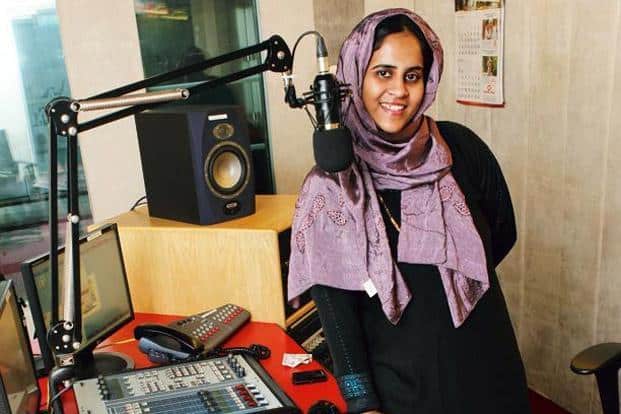 Why are you in burka? I ask Chennai’s popular radio jockey, Sanobar Sultana. “Because I want to prove a point. Because I want to prove that it is possible to be a modern Muslim,” she replies, before breaking off to introduce the next song.
Sultana, or RJ Sano, as she is known, is the host of The Breakfast Show on Chennai Live, a radio station. She is a beautiful 29-year-old with the wisecracking mien of many young radio jockeys (RJs). The Chennai Live website describes her as a “passionate Chennai-oholic” who dreams of being chased by tube lights. She has a master’s in environmental sciences and an unrequited ambition of being a postman, the website says. Listeners love her clear voice. They wake up to listen to her upbeat conversation, jokes and interviews. She signs off her show with a “Love you, guys”. Sultana, in other words, is your archetypal image of a hip RJ. Except she is clad in a burka.
Sultana lives with her in-laws in Triplicane, one of Chennai’s traditional neighbourhoods. Her mother-in-law takes care of her four-month-old daughter while she comes into the radio station every weekday from 7-11am to record her show. Sultana’s mother doesn’t wear a burka; her mother-in-law disapproves of her wearing one, and her husband, a computer professional, believes that “Hijab is in the heart” of but is supportive of her sartorial choice.
She began wearing her burka about six years ago, when she was searching for an identity. “You know how all young people go through this ‘who am I’ phase?” she asks. “Well, I found myself when I wore a burka.”
Sultana acknowledges that it would be far easier for her without a burka. “People stare at me as if I were a terrorist when I walk into a five-star hotel,” she says. A television channel rejected her job application because they didn’t want to put a burka-clad anchor on national TV. “But how come you can have a Sikh man in a turban on television but not a Muslim woman in a hijab?” she counters. Even her husband would prefer to go out at night with her sans burka. At themed events hosted by the radio station, her listeners come up to her and gawk, unable to match the modern wisecracks with the old-fashioned burka. It is these people who Sultana wants to influence. She wants to change the way people think—about Islam and about Muslim women.
What are the stereotypes that come to your mind when you see a burka-clad woman? I’ll tell you what comes to my mind, and these aren’t rational. When I see a burka-clad woman (or for that matter, a woman wearing a nine-yard sari), I think that she comes from a conservative family; that she may be suppressed; that she perhaps is a conformist, not an eccentric or free spirit. Sultana is none of these things. So, this perception, in a sense, is what she wants to change.
“Aren’t you putting your religious identity over your national one?” I ask. “You are identifying yourself with Islam more than you are with being an Indian.” As the words come out of my mouth, I wince at what I have just said. Because the burka is so obviously a Muslim dress, I am assuming that she is choosing between being a secular Indian and being a Muslim. Can’t the two coexist? Have I offended her?
Sultana doesn’t wince at my accusation. “Why do you ask this question? Why is that even a choice?” she asks. She loves India, she says. She wants her daughter to be an Olympian and represent the country. I wonder if she will want her daughter to wear a burka, but I think I already know her answer. That will be my daughter’s choice, she will say. Just because she has chosen to wear a burka doesn’t change who she is. She is Muslim, for sure, and also Indian.
Ever since France banned the burka in 2011 and even before that, more and more Muslim women across the world have embraced this traditional item of clothing as both a fashion and political statement. A burka and hijab are part of their identity, they argue, and are willing to fight for it. This trend has reached India, with young Muslim women who never saw their grandmother or mother in a burka, choosing it as their own.
As someone from the outside, it is hard for me to relate to wearing an all-covering piece of clothing on a hot day. Then again, I imagine that the same could be said of a sari. Sultana and I go back and forth, arguing about faith and personal freedom; and about reverting to constraining and outdated roles of womanhood. We discuss West Asia where burkas are de rigueur. A woman wearing one would not be stared at, I offer. Sultana has no patience for West Asia. She believes women in West Asia are repressed; not Muslim women in India.
“Did you know that the Prophet’s wife was a businesswoman?” asks Sultana. I nod. I do. “Then what is the point of banning women from starting businesses or doing certain things like driving?”
Can an object of clothing be part of your identity? For many Indian women of the previous generation, saris were part of their identity. It defined who they were; they felt bereft without one. Indian women of this generation flit easily between Western and Indian clothes. Clothes aren’t part of their identity. Instead, an item of clothing has become like an accessory—to be chosen during certain times, and discarded during others. Except the burka, which for young Muslim women, like Sultana, is part of (their) identity—even if it is a misunderstood one.
Shoba Narayan, like Sultana, is a “passionate Chennai-oholic”. Unlike Sultana, she hasn’t found her sartorial identity.
Also Read | Shoba’s previous Lounge columns