This is an important piece for me.  For reasons which I outline below. 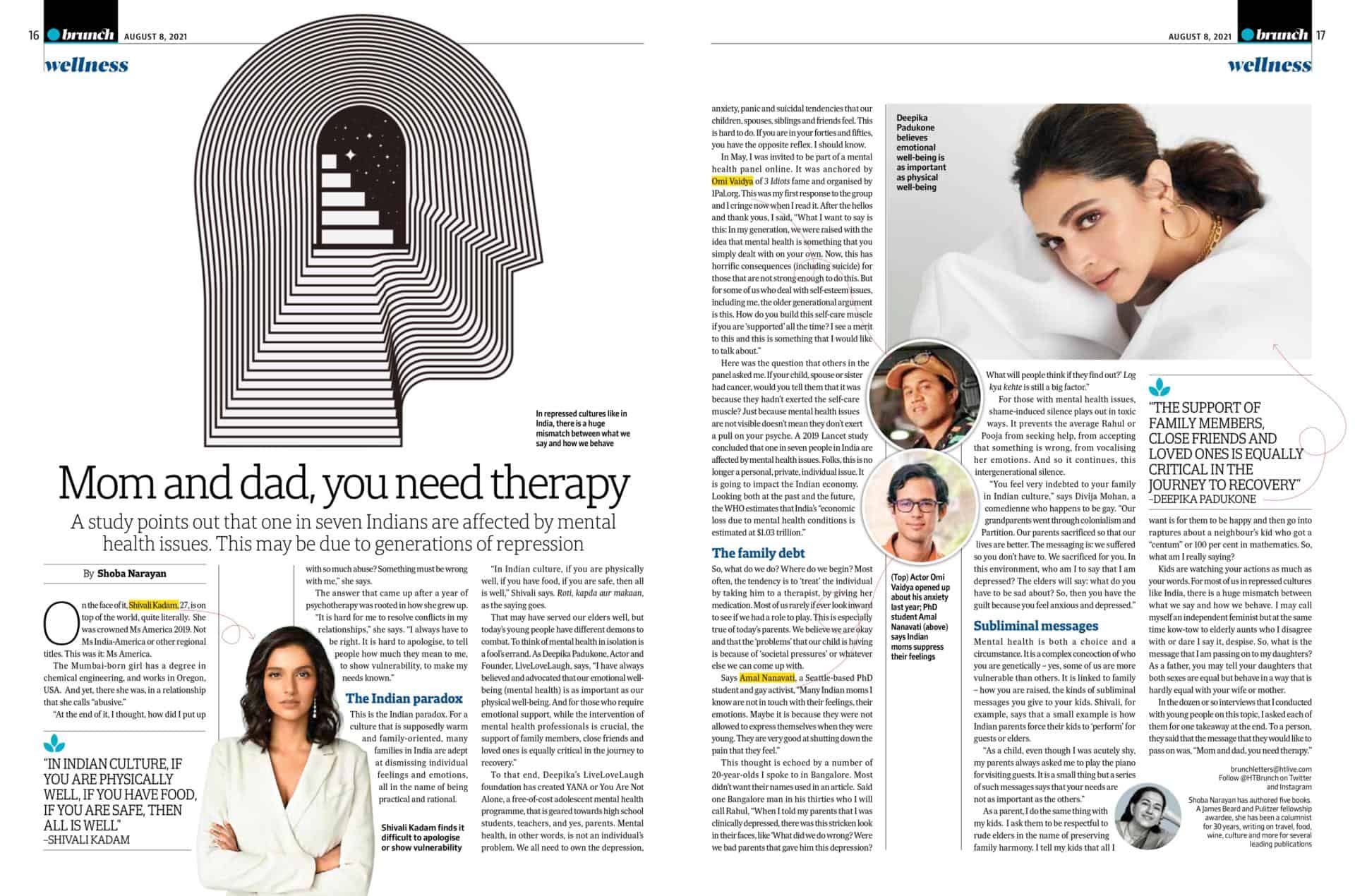 On the face of it, Shivali Kadam, 27, is on top of the world, quite literally.  She was crowned Ms. Oregon America 2019.  Not Ms. India-America or other regional titles.  This was it: Ms. America.

The Mumbai-born girl has a degree in Chemical Engineering, and works in Oregon, US.  And yet…there she was, in a relationship that she calls “abusive.”

“At the end of it, I thought, how did I put up with so much abuse? Something must be wrong with me,” she says.

The answer that came up after a year of psychotherapy was rooted in how she grew up. “It is hard for me to resolve conflicts in my relationships,” she says.  “I always have to be right.  It is hard to apologize, to tell people how much they mean to me, to show vulnerability, to make my needs known.”

This then is the Indian paradox.  For a culture that is supposedly warm and family-oriented, many families here in India are adept at dismissing individual feelings and emotions, all in the name of being practical and rational. “In Indian culture, if you are physically well, if you have food, if you are safe, then all is well,” Shivali says. Roti, kapda aur makhaan, as the saying goes.

That may have served our elders well, but today’s young people have different demons to combat. To think of mental health in isolation is a fool’s errand. As Deepika Padukone, Actor and Founder, LiveLoveLaugh says, “I have always believed and advocated that our emotional well-being (mental health) is as important as our physical well-being. And for those who require emotional support, while the intervention of mental health professionals is crucial, the support of family members, close friends and loved ones is equally critical in the journey to recovery.”

To that end, Deepika’s LiveLoveLaugh foundation has created YANA or YouAreNotAlone, a free-of-cost adolescent mental health program that is geared towards high school students, teachers, and yes, parents.  Mental health in other words, is not an individual’s problem.  We all need to own the depression, anxiety, panic and suicidal tendencies that our children, spouses, siblings and friends feel.  This is hard to do. If you are in your forties and fifties, you have the opposite reflex.  I should know.

In May, I was invited to be part of a mental health panel online.  It was anchored by Omi Vaidya of 3 Idiots fame and organized by 1Pal.org.  This was my first response to the group and I cringe now when I read it.  After the hellos and thank yous, I said, “What I want to say is this: In my generation, we were raised with the idea that mental health is something that you simply dealt with on your own.  Now, this has horrific consequences (including suicide) for those that are not strong enough to do this.  But for some of us who deal with self-esteem issues including me, the older generational argument is this. How do you build this self-care muscle if you are “supported” all the time? I see a merit to this and this is something that I would like to talk about.”

Here was the question that others in the panel asked me.  If your child, spouse or sister had cancer, would you tell them that it was because they hadn’t exerted the self-care muscle? Just because mental health issues are not visible doesn’t mean they don’t exert a pull on your psyche.  A 2019 Lancet study concluded that 1 in 7 people in India are affected by mental health issues. Folks, this is no longer a personal, private, individual issue.  It is going to impact the Indian economy.  Looking both at the past and the future, the WHO estimates that India’s “economic loss due to mental health conditions, between 2012-2030, is estimated at USD 1.03 trillion.”

So what do we do? Where do we begin? Most often, the tendency is to ‘treat’ the individual, by taking him to the therapist, by giving her medication.  Most of us rarely if ever look inward– to see if we had a role to play.  This is especially true of today’s parents.  We believe we are okay and that the ‘problems’ that our child is having is because of ‘societal pressures’ or whatever else we can come up with.

Says Amal Nanavati, a Seattle-based Ph.D. student and gay activist, “Many Indian Moms I know are not in touch with their feelings, their emotions.  Maybe it is because they were not allowed to express themselves when they were young. They are very good at shutting down the pain that they feel.”

This thought is echoed by a number of 20-year-olds I spoke to here in Bangalore.  Most didn’t want their names used in an article.  Said one Bangalore man in his thirties who I will call Rahul, “When I told my parents that I was clinically depressed, there was this stricken look in their faces, like ‘What did we do wrong? Were we bad parents that gave him this depression? What will people think if they find out?”  Log kya kehte is still a big factor.”

For those with mental health issues, shame-induced silence plays out in toxic ways.  It prevents the average Rahul or Pooja from seeking help, from accepting that something is wrong, from vocalising her emotions.  And so it continues, this intergenerational silence.

“You feel very indebted to your family in Indian culture,” says Divija Mohan, a comedienne who happens to be gay.  “Our grandparents went through Colonialism and partition.  Our parents sacrficed so that our lives are better.  The messaging is: we suffered so you don’t have to. We sacrificed for you.  In this environment, who am I to say that I am depressed? The elders will say: what do you have to be sad about? So then you have the guilt because you feel anxious and depressed.”

Mental health is both a choice and a circumstance.  It is a complex concoction of who you are genetically– yes, some of us are more vulnerable than others.  It is linked to family– how you are raised, the kinds of subliminal messages you give to your kids.  Shivali, for example, says that a small example is how Indian parents force their kids to ‘perform’ for guests or elders.  “As a child, even though I was acutely shy, my parents always asked me to play the piano for visiting guests.  It is a small thing but a series of such messages says that your needs are not as important as the others.”

As a parent, I do the same thing with my kids.  I ask them to be respectful to rude elders in the name of preserving family harmony. I tell my kids that all I want is for them to be happy and then go into raptures about a neighbour’s kid who got a “centum” or 100% in mathematics.  So what am I really saying? Kids are watching your actions as much as your words.  For most of us in repressed cultures like India, there is a huge mismatch between what we say and how we behave.  I may call myself an independent feminist but at the same time kow-tow to elderly aunts who I disagree with or dare I say it, despise.  So what is the message that I am passing on to my daughters? As a father, you may tell your daughters that both sexes are equal but behave in a way that is hardly equal with your wife or mother.

In the dozen or so interviews that I conducted with young people on this topic, I asked each of them for one takeaway at the end.  To a person, they said that the message that they would like to pass on was, “Mom and Dad, you need therapy.”