Feminism is important to me, but my stance as a feminist is quite confusing, even to me. I was raised to compromise and many times, I do. What is the difference between compromising and copping out? I am still figuring out stuff. A group of friends and I had a dinner conversation once. If you spouse cheats on you, would you walk out? To my surprise, one of the most intelligent and articulate woman in the group said that she wouldn’ 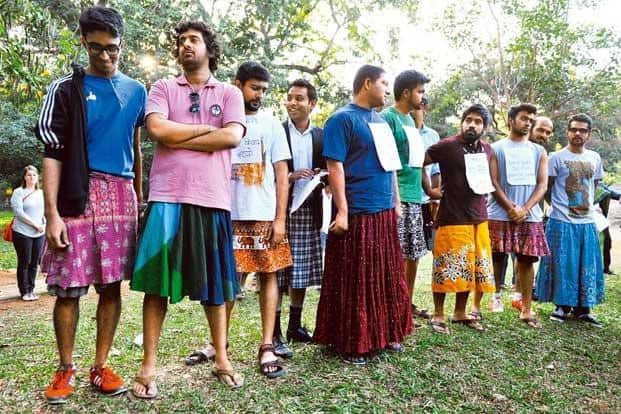 t– walk out, that is. She is quite famous in India and widely respected. My point is that she is no doormat or sissy. Another woman-friend of mine who is the mother of two boys said that she wouldn’t walk out. She is a scientist (Ph.D. to boot) and said this. Both these women had reasons that made sense to me. But I would walk out. That’s what I said anyway, even though I am not quite sure on this.

This article is a start in my trying to figure out this feminism thing.

The new feminist is male
For feminism to continue to be relevant, men need to be part of the movement and the conversation
Shoba Narayan

On 12 January, men came to Cubbon Park, Bangalore, dressed in skirts. Photo: Manjunath Kiran/AFP
Recently an advertisement titled Soldiers Wanted has been making the rounds. “Not to guard the borders,” says the ad. But to stand up for women. As I watched the ad, I experienced the knee-jerk reaction familiar to modern women. Come on, I thought. Women don’t need soldiers—or protectors. They need respect. But that really is what the ad says in spite of its unfortunate beginning. It shows men in various jobs and asks them to stand up for women; to “respect” women. Not once is the word “protect” used. I checked.
Feminism is a loaded, misunderstood word. Even Marissa Mayer, the CEO of Yahoo! who is in the news these days because of her work-life policy, describes feminists as “militant” and having a “chip on the shoulder”. Off-putting as that sounds, both those descriptions are true. In 1968, 400 American women gathered outside the Miss America pageant in Atlantic City, New Jersey, to protest against enforced standards of femininity. They marched, held up posters, and threw pots, pans, aprons, false eyelashes and other female accoutrements into a “freedom trash can”, to symbolically rid themselves of the constraints society placed on them.
Although news reports are mixed about whether these women actually burned their bras, the press coined the word “bra-burning” to describe feminine rage. They compared feminists with angry Vietnam war protesters who burned their draft cards. So, yes, feminism has a history of militancy. As for the chip on the shoulder, feminists have that too. That is because feminists are underdogs; and like underdogs everywhere, they take umbrage easily. Indians ought to relate to this. We are famous for taking offence at perceived slights, particularly from foreigners. Show me someone without a chip on their shoulder and I’ll show you…a baby. When you get hurt by life, you develop a chip on your shoulder.
What is distressing is the number of young women who hesitate to embrace feminism, while enjoying its benefits. These are young college girls who enjoy the fruits of the battles that women before them have fought. Yet they hesitate to identify themselves with the movement.
Feminism needs to rid itself of its militant carapace in order to make it palatable to more young women. The term—and the movement—needs to be softened somehow to become relevant to the needs of the day. There is one way to do this: through men. Quixotic as it seems, male involvement is necessary to legitimize and popularize the feminist movement. Hence the question: Are you a male feminist? Are you, dear male reader, a feminist? What does this term mean to you?
On 12 January, 25 men in Bangalore wore skirts in Cubbon Park to protest the New Delhi gang rape; and the suggestion that it was the way women dressed that attracted sexual assault. I emailed a few of them to ask their views on feminism. “First of all, it wasn’t a protest. It was an awareness initiative,” said one. Okay, I stand corrected. First principle: Rid a movement of its combative edge. The men got that at the get-go.
I asked the men if they would consider themselves feminists. To my surprise, many said “yes”.
Ajay Kumar, a fifth-year law student at Christ University, Bangalore, wore a skirt “because it was important to show people that gender is a social construct and social constructs can be destroyed”.
Adithya Mallya, an entrepreneur who co-organized “Skirt the Issue” with his girlfriend, Samarpita Samaddar, echoed the views of most of these men. “Feminism means equality,” he said. “Treating women equally means that both the good and bad treatment are done away with. One should not restrict a woman from opening a door. She has every right to.”
I quite enjoy men opening doors for me, even though I consider myself a feminist. But Mallya has a point and it reflects why gender equality is so complicated. On the one hand, you can consider gestures such as opening the door for a lady to be small courtesies. On the other, they feed into the “man saving woman” trope that is the hallmark of most Disney movies and children’s stories ranging from Cinderella to Snow White. Why should men save women? Why can’t a woman take care of herself?
M.V. Rajeev Gowda, a professor at the Indian Institute of Management, Bangalore, and a member, central board, of the Reserve Bank of India, is more cautious and reflects the view of many men I know. Although he is committed to the principles of gender equality, he says, he would hesitate to proclaim himself a feminist because “it seems like a loaded term with an element of confrontation built into it”. Gowda has organized protests against moral policing and wants to correct women’s under-representation in politics. He walks the talk even if he doesn’t cop to the term. “There are many people, especially men, who through their quiet actions and support for women’s rights…are true feminists without the combative edge.”
I know scores of men like this—fathers, sons and brothers. These are men who would hesitate to call themselves feminists even if they behave as if they are. This then is the way forward. Men aren’t the enemy; they are allies. In order for feminism to continue to be relevant, men need to be part of the movement and the conversation. We need their help to take the abrasive edge off this term. We need men to make feminism cool.
Are you a male feminist?
Shoba Narayan admires male feminists. Write to her at [email protected]
Also Read | Shoba’s previous Lounge columns