The Art of Throwing

The Art of Throwing

Do scientists do research on throwing and running? I didn’t know this before I interviewed this man. It was heartening to hear his views on scientific research in India and the funding that is available. My friend, Srikantan, who is in California, once tried for a faculty position in the IISc and mentioned that it was tough to crack. Since then, I have wondered about luring scientific minds back to India– and whether Indian institutes have the ability to do this. Nowadays, I hear about more and more Indian-American professors who are returning to India to take up jobs. My friend, Chetan Subramanian heads up the International program at IIM Bangalore. He returned from the US two years ago. Good to see this reverse brain drain. 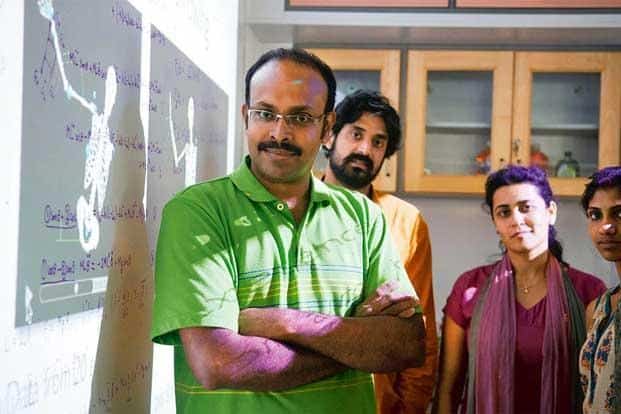 The art of throwing
Is there a systematic rational way to verify which type of throws are better?

Madhusudhan Venkadesan with his students at his NCBS lab. Photo: Aniruddha Chowdhury/Mint.
Madhusudhan Venkadesan speaks in the even, uninflected tone of the professor that he is. Ask him a question and he will pause before responding. A mechanical engineer from the Indian Institute of Technology, Madras, Venkadesan studied at Cornell University, and received a postdoctoral degree in biomechanics, focusing on locomotion and running. For two years, he worked in Harvard with two professors, whose departments were across the road from each other. One was Prof. Daniel Lieberman’s Skeletal Biology Lab, where he studied “barefoot running”. The other was with Prof L. Mahadevan, who goes by the rather magnificent title of Lola England de Valpine professor of applied mathematics and professor of organismic and evolutionary biology, where he studied—wait for it—throwing. Venkadesan explains it thus: “How to throw? Is underarm better or overarm? Is there a systematic rational way to verify which type of throws are better? When you throw, there is an error and different throws amplify the error. What is the best throw? It is really like 10th standard math to figure out how systems amplify.”
As my Paati (grandmother) would say—insert dour New York Jew tone here—“You go to Harvard and study shot put?” Trying not to sound rude, I ask Venkadesan why anyone would study throwing at Harvard and what earthly use it could have. “Dartboards,” he replies. “Think of how to improve the odds in throwing darts. As it turns out, overarm is simply the best way to throw. The dart flies up in this curved path and the overarm throw doesn’t amplify error. The way to throw is slowly, and overarm.” Perhaps the cricket board should hire Venkadesan to coach players on how to throw.
After he finished at Harvard in 2010, Venkadesan says he was “geographically indifferent” about where to take a faculty position. He got offers from Canada and the US and ended up choosing India, where he is an assistant professor at the National Centre for Biological Sciences (NCBS) in Bangalore. How, I wonder, does an Indian academic set-up compare with Harvard? “The funding support for science in India is phenomenal,” he replies. “There is a lot of money available from the government. The total science budget isn’t huge—much smaller than other countries—but there are fewer seekers for those funds.”
At American universities, departments and professors apply for grants to fund their research and pay their senior students—who help with their teaching and research. The Indian model is different, says Venkadesan. “Here, almost all my students are covered by government fellowships, a small minority get grants and almost no one is teaching. It is the US model turned on its head.”
We get down to brass tacks. Why would anyone study running and throwing? “There is a difference between humans, other animals and machines in terms of controlling their movements,” Venkadesan replies. “A robot is a fast, precise and strong machine. A car is a fast machine. No animal can catch up with a car. The minute you remove roads, however, a car is terrible. Sloppy animals outdo precise machines when the environment becomes unstructured.”
Venkadesan studies human movement to make machines better. In earthquake rescue, for instance, it would be good to build a machine that could climb as adeptly as a mountain goat and be as adept as a human hand in helping people out of debris.
There are certain movements and behaviours that humans do exceedingly well: long distance and endurance running, dexterity, and throwing at high speeds. “Even a cricket fielder can throw at 100km per hour (kmph), and that is a medium speed throw,” explains Venkadesan. “No chimp can throw at this speed. Is there something about the human body that makes us good at these movements or is it because our brain is more evolved?”
Venkadesan has human volunteers at his lab, along with computer graphics software and a camera “such as the ones in Bollywood”. They also have “standard sensors” that the automobile and sports industries use to measure accelerations and how muscles are acting during motion. The lab studies the mechanics of the body and its interactions with the environment. They also ask creative, slightly weird questions. “If I change the shoulder morphology to make the human more like the chimp, will he throw better?”
The most practical application of Venkadesan’s research has to do with that simplest of activities: running. After years of studying how muscles in the heel strike the ground, he can probably look at how you run and pick out areas where you have injured yourself. “My research can tell us how to fix things. I can say, ‘Look, if you’ve injured yourself, run slightly differently and then you can run better.’” Changing the style you do things with is, after all, a key human trait. Unlike machines, humans are adaptable. Even though Venkadesan wants to level that playing field.
Shoba Narayan is a barefoot runner, okay walker. Write to her at [email protected]
Also Read | Shoba’s previous Lounge columns