The lure of Sport Fishing for The National in Abu Dhabi

The lure of Sport Fishing for The National in Abu Dhabi 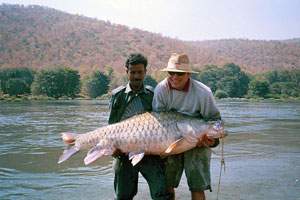 The lure of sport fishing

A man struggles under the weight of a mahseer caught in Karnataka. Courtesy Jungle Lodges & Resorts Ltd

For a vegetarian to hold a live fish is, to say the least, unsettling. For a lifelong Hindu vegetarian such as myself to hold a throbbing 18kg humpback mahseer was quite frankly terrifying.

Yet there it was, this scaly silvery fish, cool to touch, heavy with life, twitching with tiredness from the race it had put us through for the last hour. I felt like I always do when I confront dead meat or fish: a twitch of sorrow followed by firm instructions to myself not to judge those that took pleasure from it.
“Beginner’s luck,” said the guide as he gently took the fish from me and tossed it into the Cauvery River. With a flip of tail, it disappeared into the shimmering depths. Where was a camera when I needed one?

I am no angler; I had come to Bheemeshwari Fishing Camp in Karnataka for a long weekend mostly because it is an easy two-hour drive from Bangalore, where I now live.

Once there, I found myself surrounded by anglers from all over the world. Laced with brawny beers, the pre-dinner talk was all about piscatorial pursuits. One couple had just returned from Russia and Outer Mongolia where they “hunted” the fierce taimen. A bearded man in a batik T-shirt talked about “snaring” a 100-kg arapaima in the Amazon. The humpback mahseer that the Cauvery River threw up were “humungous”, said a man named Reddy, who looked Indian but spoke with an American accent. When I admitted that I had never gone fishing in my life, he invited me to accompany him the next morning, which was how I found myself clambering onto a coracle at dawn.

Our guide, Antony, steered us to a spot on the far side of the river where he and Reddy got into a spirited, if incomprehensible, discussion about plugs, hooks, monofils, and braids. Antony told us tales of the mighty mahseer (for some reason mighty is the adjective most often associated with the mahseer, a local species of trout) snapping a 18kg test line as if it were string. The bait was a local millet, made into a paste and “dressed on a six aught hook.” They also had crabs and some chilva fish as back up. Then we waited.

Fishing, to me, seems mostly about waiting and the Cauvery River is about as good a place as any to idle. Surrounded by verdant undulating hills, the pristine river is a far cry from India’s congested cities. Legend has it that the Cauvery, sacred to the Hindus, originated in the mountains of nearby Coorg when a crow toppled Sage Agastya’s container of holy water, causing it to flow downhill.

She is a pretty one, this river, gushing across rocks and pebbles, playfully tossing leaves and the odd piece of bark as she bubbles forth. Mentioned in ancient Sanskrit texts, the Cauvery is now the source of an intense water dispute between two adjoining southern states: Tamilnadu (where I was born) and Karnataka (where I now live). The Cauvery connects, yes, but she also divides.

As I mulled over all this, I noticed Reddy trying to balance his fishing rod as he leaned over to pick something up. Wordlessly, I offered to hold it while he organised himself. Then it happened. I had barely taken it off his hands when a tug nearly yanked it out of my own. I could hear the reel spooling out as Reddy sprung into action, grabbing the tackle and calling instructions to Antony.

I can’t say I understood what followed. There was quiet muttering about “multipliers” and changing “lines.” Reddy was cursing freely and fluently as he wound, let go, wound and asked questions about hooks and lures. Time passed, longer than what I had imagined it would take to catch a fish. Every now and then Reddy would say, “I think we lost her.” Then he would feel something and go into overdrive.

Eventually, just as I was losing interest, he wound rapidly and a fish appeared above water. The three of us stopped just short of cheering.

Quickly Antony guided the coracle to shallow waters. The two men stood knee-deep in the river and bent to the fish, lifting it to the surface. Antony photographed Reddy holding the fish and then it was my turn. I held it for precisely five seconds before Antony lifted it off my hands and tossed it back into the river.
Mahseer means “great head,” and it is an apt name for this prized game fish that fights and taunts before it submits. Rudyard Kipling described the mahseer as one “beside whom the tarpon is a herring and he who catches him can say he is a fisherman”.

It was the British who introduced sport fishing to India – and took it back with them when they left. In the early years of India’s independence, a burgeoning and hungry populace stripped the rivers and forests of fish and wildlife. In 1977, the British Transworld Fishing Expedition surveyed India’s rivers and recommended that mahseer fishing be banned, which probably saved it from extinction. Today, sport fishing is experiencing a quiet revival and Indian rivers, while not exactly teeming with fish, are not devoid of them either.

That night there was more fish-talk, but this time I was a knowledgeable participant. Indeed, I was the star, being one of the few who had actually caught a fish that day.

Bheemeshwari Fishing Camp is part of Jungle Lodges, a company that runs a dozen safari lodges all over Karnataka state.
During the three years that I have lived in Bangalore, I have visited a number of its properties ranging from Kabini (where elephants thrive) to River Tern Lodge (for water sport) and now Bheemeshwari.

The next morning our day began at 6am, when a man knocked on the door bearing coffee, tea and biscuits. By 6.30 almost everyone converged at the gazebo to plot the day – coracle rides, bird watching, trekking, river rafting, spa treatments and, in season, fishing. The camp follows a sensible catch-and-release policy and allows only 10 rods during the morning and evening sessions.

For “angling widows”, there is an ayurvedic spa offering massages at $25 (Dh90) an hour; it was excellent, though I prefer milder oils instead of pungent herbal ones used.

Relative to other countries, angling in India is still new. There aren’t that many outfitters and those that exist operate in rustic environs – a draw for some who are attracted to the “purity” of the sport.

As for me, I have recently – and cautiously – taken up the sport. Waiting for a fish to take a bite, I find, is immensely relaxing. It helps me forget the humdrum monotony that is the background thrum of my life.

Husband, kids, puppy and play-dates all seem so far away. All that matters, for that moment, is the chirrup of the jungle and the gurgling river while waiting for the heady rush of a giant mahseer giving me the run of its life. Waiting, as I have come around to realise, is not so bad after all. In fact, it can be quite Zen.

Shoba Narayan is the author of Monsoon Diary: A Memoir with Recipes