The best masala dosas in Bangalore

The best masala dosas in Bangalore

Can you even list out the top masala dosas in Bangalore?

My column: Bangalore Talkies in HT address this thorny question 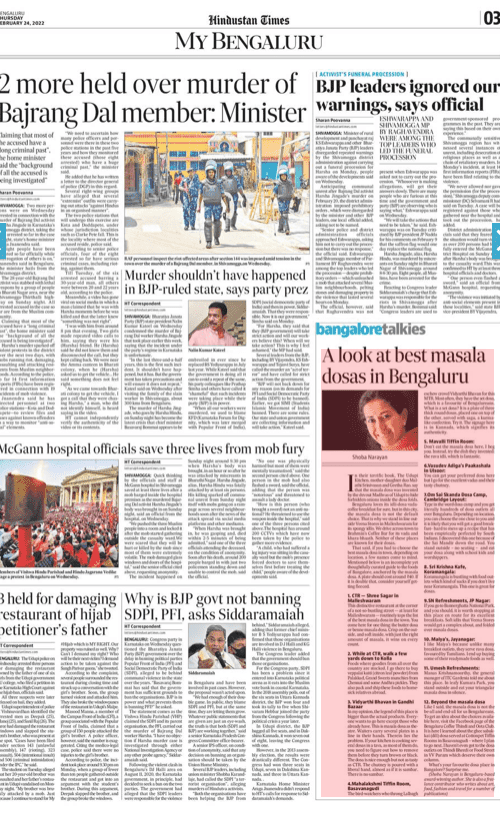 In their terrific book, The Udupi Kitchen, mother-daughter duo Malathi Srinivasan and Geetha Rao, say that the masala dosa was invented by the devout Madhvas of Udupi to hide forbidden onions into the folds of the dosa.

Bangalore loves its idli-dosa-vada-coffee breakfast for sure, but in this city, the masala dosa is not the default choice.  This is why we stand in line outside Veena Stores in Malleshwaram for its spongy idlis.  We drive across town to Brahmin’s Coffee Bar for its vada and khara-bhaath.  Neither of these places are known for their dosas.

That said, if you had to choose the best masala dosa in town, depending on location, a few names come to mind.  Here then is an incomplete guide to the foods of Bangalore, anchored by the masala dosa. A plate should cost around Rs.40.  If it is double that, consider yourself getting fleeced.

Beyond the masala dosa: Like I said, the masala dosa is not the be-all and end-all for us Bangaloreans.  To get an idea about the choices available here, visit the Facebook page of the Bangalore Coffee Thindi and Oota Club.  It is here I learned about the ghee sabakkai (dill) dosa served at Cottonpet Tiffin Rooms in Basavanagudi– where I plan to go next.

I haven’t even got to the dosa outlets on Thindi Bheedi or Food Street in V.V. Puram which deserve their own column.  What’s your favourite dosa place in Bangalore? Surprise me.