Could you be governed by a man called Manmohan Syng? Or by Raahul Gaandhy?

Perhaps our beleaguered (forgive the cliché but it is true) prime minister should consider changing the spelling of his name.  Numerology, you know.  Everyone is doing it.  Ajay Devgan changed his name into Devgn, which sounds more like an asthmatic wheeze than a name.  Our speaker is called Meira, not the normal Meera that M.S. Subbalakshmi portrayed in the movie.  Anil Kumble’s brother calls himself Diinesh Kumble, with the double ‘i.’

Lots of people call themselves Sawhney instead of Sahni.  A columnist who shares my names has filled it with as many ‘a’s as an aardvark.  At least two chief ministers of southern states—Jayalalithaa, she with the double a’s and Yeddyurappa, he with the crazy y’s— have used numerological names to improve their fortunes.  It worked for Madame but not for Yeddy.

I am thinking of changing my name. Just to see what happens. In fact, I have unofficially changed my name these last few months when I was away from writing this column, with very little tangible effect. I mean, I didn’t win the lottery or anything. I think I did it all wrong. Part of what makes numerology work, I think, is the extent of the name-change. Do you just decide like I did that henceforth you will sign all emails with a differently spelled name; or do you have to take an advertisement out and tell the world that you are henceforth going to be a Suniel, not merely Sunil Shetty? How wholesale does a name change have to be?

On email, I changed my name from ‘Shoba’ to the North Indian ‘Shobha.’ My Indian email contacts didn’t notice anything amiss. But my foreign contacts were all in a tizzy. I got a flurry of emails from Rio and Rome; from New York and Nairobi, all stating that my email had been hacked; that an imposter was sending out emails under my name.

It got a bit tiresome because I had to go to the ‘signature’ tag each time I was sending an email to a foreign address and use my normal name, and then change it to my numerological name to my Indian contacts. I am not even going to get into the Indian vernacular spelling of my name and how it is spelled in Tamil, Hindi and other languages that fall into the numerological purview.

There are three categories of Indians: those who live their lives through astrology; those who disdain it; and those—like me—who don’t discount it but don’t live by it either. I know plenty of people who fall into the third category and they come from the most unlikely places. Scientists and statisticians go from rational to risk-averse when it comes to astrology, or numerology. Diinesh Kumble, for instance, is a wildlife photographer. He doesn’t seem the kind who consults an astrologer before he heads out to the Amazon. His brother doesn’t spell his name Aniil Kumble; or maybe he should.

What tips normally rational people over the edge? I think it is when life throws you monkey-wrenches that you cannot solve—health issues, financial crises, accidents, death.

Here is the nifty thing about all these astrological things though. There is no control group. Devgn probably figured that he had a winning run after his name changed, which reinforced this numerological proposition. The fallacy is that he doesn’t know if his success is because his hard work is finally paying off or because he changed his name. Unlike the movie, Sliding Doors, there is no scenario in which Devgn was still Devgan and then went on to have the same winning run.

A recent article in The Atlantic called “The Triumph of New-age Medicine,” says that repeated and carefully controlled studies show that alternative therapies like homeopathy, acupuncture and ayurveda don’t do much for a patient in a quantifiable ways. Yet, they have a remarkable ability to make a patient feel better. This seeming paradox is why it is hard to discount alternative remedies. The same argument applies to the whole “Return to India” spectrum. The problem for all those Indians sitting in Silicon Valley and New York and longing to return to India but finding it hard to make the leap is because all of India’s benefits are hard to quantify while all of America’s benefits are easily quantifiable.

You can mark a Wall Street bonus down to the very last fraction. You can mark exactly how much you made while selling a Palo Alto apartment at the peak of the market. What are harder to quantify are the feel-good factors associated with India. How to put a price on being a son or daughter to your parents on their turf, on their terms and on their schedule? Most NRIs flying down to India for a few weeks are treated as guests in their own childhood home. How to quantify the transition from “mehmaan” to son? Numerology, astrology, palmistry and all these inaccurate arts (or sciences) fall into this category. Their effects are hard to quantify, but the patients, or name-changers, feel their benefits.

A numerologist in Vaikom, Kerala told me years ago that I should spell my name Sobah Sarmah. That sounds like an Iranian pet-dog. Shobha, in that sense is a compromise. I didn’t consult a numerologist; I chose a random name-change at a random time in my life. Let’s see what happens.

Shoba Narayan wishes it to be known that henceforth she will be known as ShobHa Narayan. 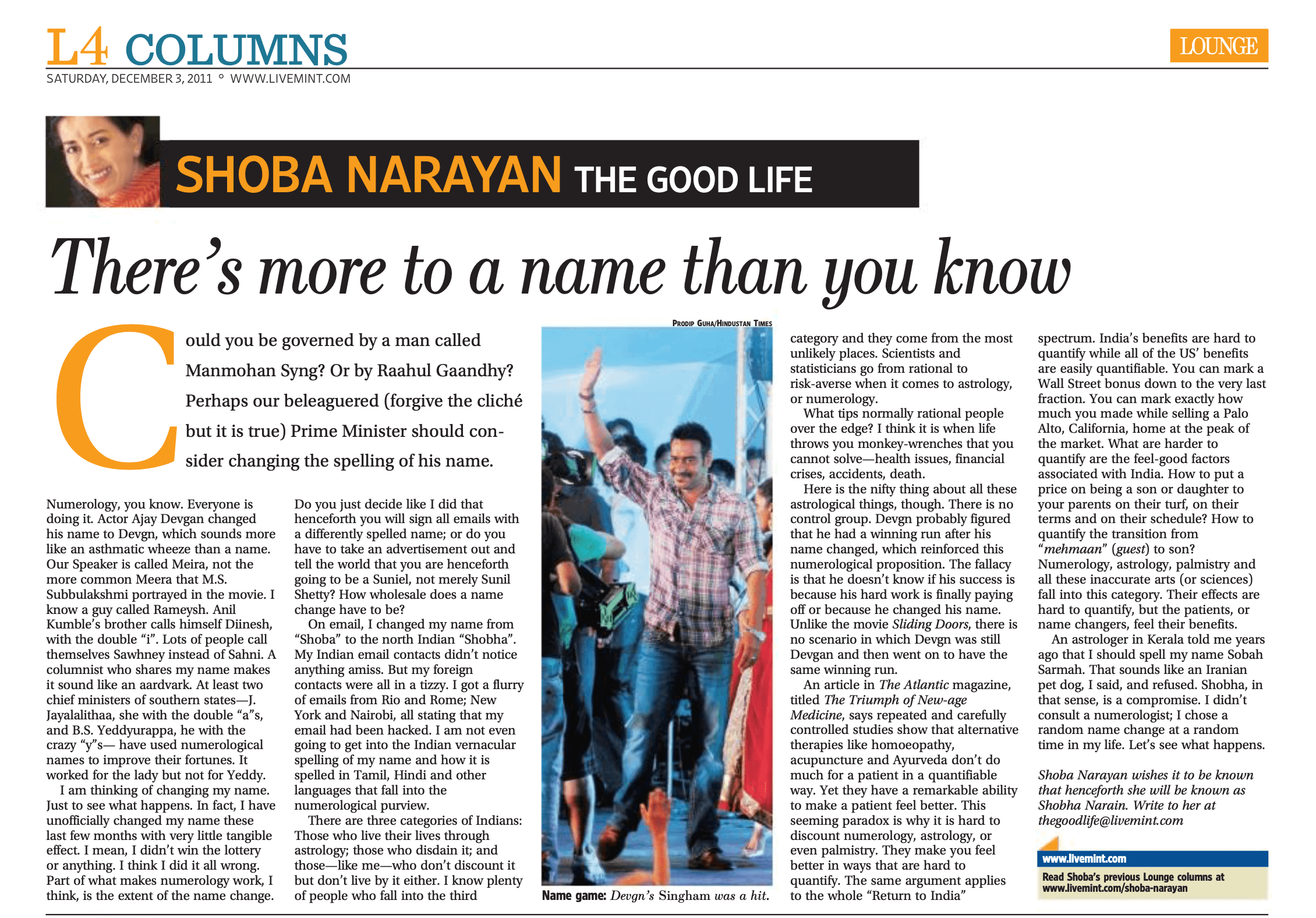 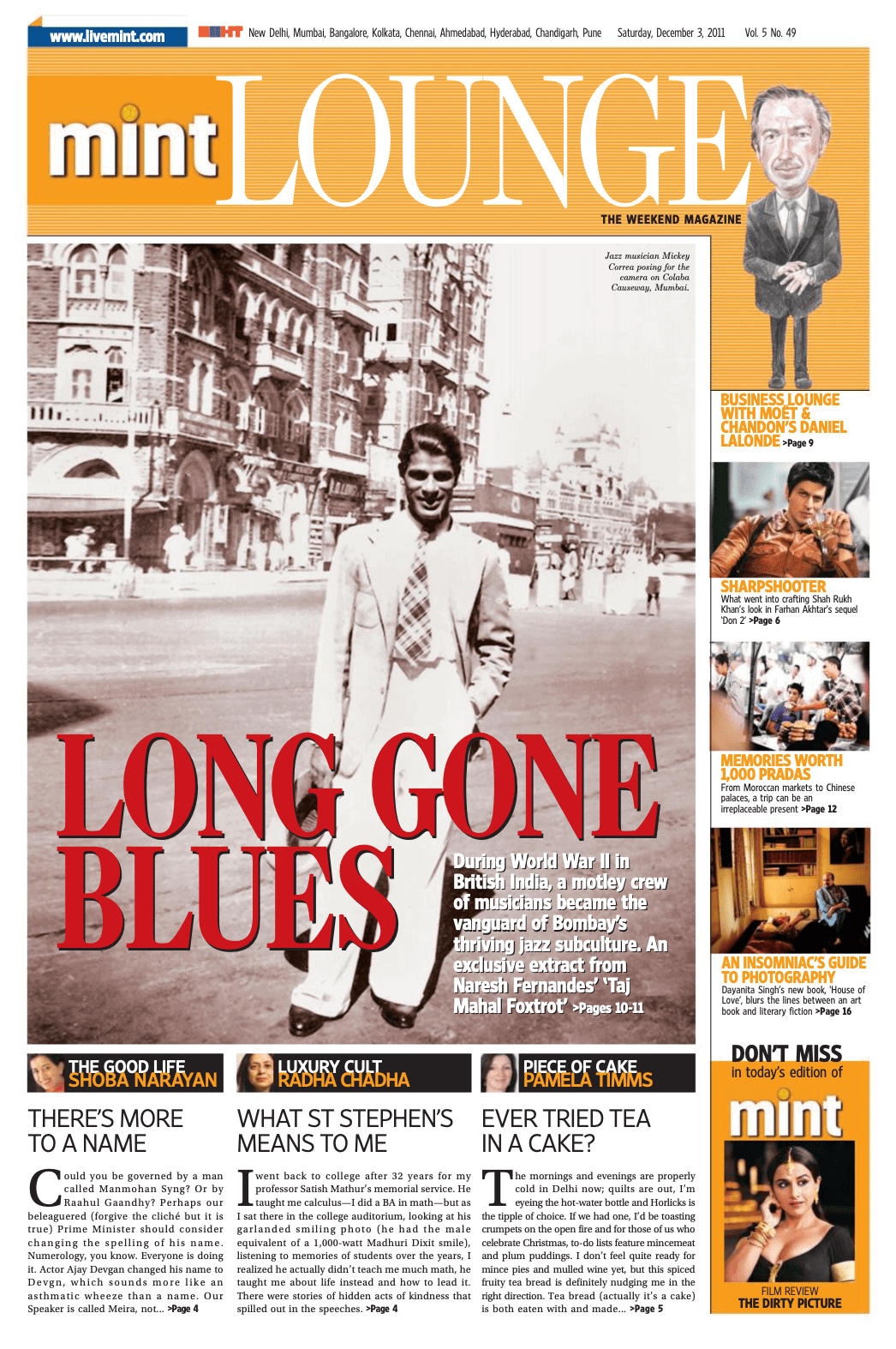