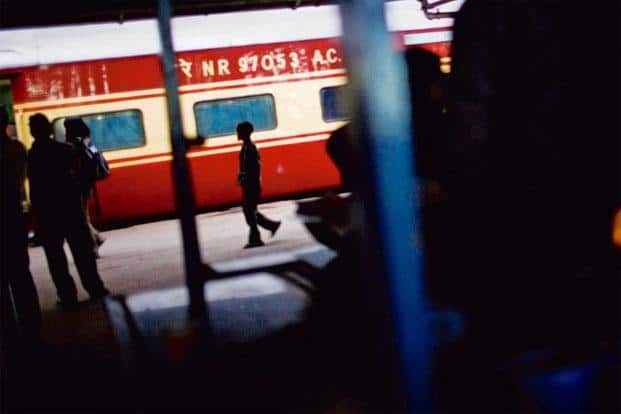 Train travel has both a created ecosystem and inflection points.  The first inflection point is when you walk down the corridor to your compartment for the first time, wondering who your fellow travellers are.  They are the people who will share your space for the next six or 36 hours.  Their temperament is critical to your well-being.

Mine, on this overnight train journey from Bangalore to Kumbakonam, happens to be a nun, an elderly couple and two men.  Sister Mary teaches biology at a college in Trichy.  She is good looking, with clear brown skin and shiny black eyes.  Her habit reminds me of the sisters who taught at St. Antony’s where I studied.  The couple is travelling to visit their daughter.  She wears a pink cotton sari and jasmine flowers in her braided hair.  No bindi though.  He wears a “bush-shirt” and khaki pants.

Train travel is artless and easygoing.  Nobody is trying to impress anyone, which is what we do in planes.  We dress well, carry nice wheelies, and speak in posh accents so that the stewardesses don’t think we are country bumpkins and skimp on the wine.  My train-mates have no such pretenses. The elderly gent sitting beside me reads Dinamalar, a Tamil paper.  He opens a “Rasi Silks” plastic bag.  It has a few green bananas, which he offers to us.  The bananas are delicious and compete with the “jadi-malli” jasmine that the Aunty-ji is wearing.  Someone offers Brittania biscuits.  An empty bottle of “777 Kashmiri syrup” is used to carry water.  A lady in the next compartment is talking loudly on her mobile phone.  “Fry the onions nicely before you grind them into a chutney, okay?  Don’t forget to put the curds into the frig.  Tomorrow, put out two milk coupons for coffee.”  Is she a mother-in-law instructing a daughter-in-law? Or a mistress talking to a maid? Maybe she is speaking to her husband. Hard to say without putting a face to the words: her tone of voice could apply to all of the above.  The compartment behind me has a mother teaching her baby.  “Thamarai (lotus),” she enunciates.  “Say it.  Tha-ma-rai.  Chollu/Bhol (say it).”  A lilting voice repeats hesitantly, “Tha-ma-rai.”  There is clapping: an entire compartment clapping for a toddler who says her first words.

The train is moving.  I am in Third AC, which means that there are three berths per compartment.  I love the middle berth.  It is high enough for privacy but low enough to peer out of the window.  The moving train makes us relax.  Our luggage is stowed below the seat and we haven’t forgotten anything.  As a child, my father was famous for asking questions like, “Have we locked Teddy (our dog) inside the house?” or “Have you turned off the gas?” after the train started.  It left us in a lurch for the rest of the trip.  We used to visit cousins in Bombay and didn’t travel by AC coach.

I don’t like travelling by AC coaches, even though I almost always do so these days.  I am getting soft, I guess.  The windows are darkened and I cannot see anything outside, which irritates me.  I peer and see my own shadow.  Watching the world go by is the best part of train travel.  Non-AC coaches afford companionship and porousness between the outside and the inside.  Even the windows in Sleeper class are designed so that you can peer out: the metal lattices curve out.  You can pour out water and watch it arch as the train speeds.  You can spit out watermelon seeds and imagine entire orchards rising up in your wake.  You can watch desperate passengers make a spirited run to catch the train as it pulls out.  You can hear the click-clack of the train.  None of this is possible in AC coaches.

I have travelled in unreserved compartments and refuse to do so again if I can help it.  The worst part of unreserved coaches is the latent aggression in everyone.  People don’t travel unreserved by choice.  They either are last minute travellers—for death ceremonies, births or weddings—or cannot afford it.  At every station, you steel yourself for more invaders into your space; and you cannot say no.  They have as much right as you do.  So you puff yourself out like a hostile porcupine, hoping that through glares and elbows, you can put off fellow passengers from occupying the space beside you.  As children, my brother and I would climb up on the berth to avoid the crowds but there was no escape there too.  The funny thing is how little of that discomfort I remember now.  I certainly don’t feel mad or bitter about it, which is good to know about life in general.  S+*^ happens, but you mostly forget it later.

One constant in train travel—then and now—is the bathrooms.  They stink.  I don’t see a solution though, other than fitting them with fragrant diffusers or Odonil packets.  I know people who stop drinking water before overnight train journeys because they refuse to use the, ahem, facilities.  They tell me that I am romanticizing train travel and perhaps I am.

The nun who shares my compartment is fast asleep.  I look for my trusted green hold-all but am left instead with crisp white sheets that my fellow-travellers have spread out into beds.  I hope they have been washed well by the dhobis. I climb on the top berth.  The horn toots in the darkness.  It is as comforting as a grandmother’s story.  My eyes close.

Shoba Narayan still doesn’t know what “shunting” does to trains.