The last of my beloved train diaries. For now.

Train diary No.4: strangers and friends

There are two types of people who travel on Indian trains: extrovert and introvert
Shoba Narayan 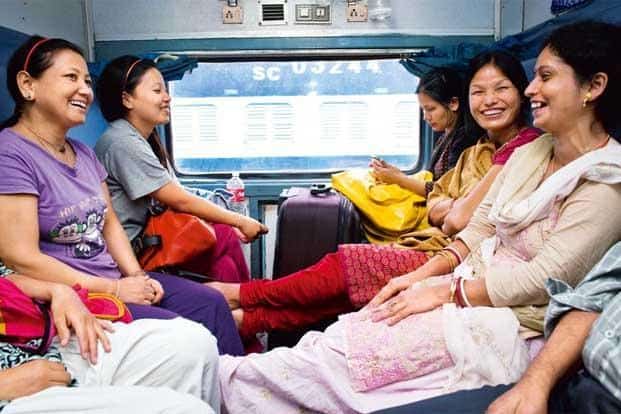 There are two types of people who travel on Indian trains: extrovert and introvert. Every compartment usually has both. There are the silent types who stare unblinkingly as you enter their compartment. There are others who smile and make room; and just when you are thinking of them as good prospects for sharing the night’s dinner, they ask you to exchange their upper berth for your lower one. That is when you look at the strong, silent type and wish you’d followed his example.

Indian train compartments are beautifully designed for the most part. There are hooks from which to hang the odd plastic bag filled with fermenting black bananas that are bursting with what seems like pus. There are electrical plugs to charge your mobile device; metal rods into which you chain your bag or suitcase in case midnight robbers make off with your belongings; and seats that fold out into sleeping berths.

Although we like to pretend otherwise, human beings are deeply attuned to pace and proportion. To go from Bombay to Britain in 8 hours is possible by plane, and we do this all the time. We get off feeling groggy and disoriented and attribute it to melatonin and jet lag. What we don’t talk about is the psyche and its adjustment—or lack thereof– to air travel. It is only when you travel by trains that you notice how their speed and size are suited for human beings: fast but not disorienting; cozy but not cramped, at least in the air-conditioned coaches. The one defect has to do with height: train berths are designed for dwarfs. Sit up and…well, you can’t sit up particularly in the upper berth. You have to scrunch in a foetal position, both when you sit and when you sleep. As a teenager, I scrunched so much that I fell off the top berth. True story. Apparently, I didn’t even wake up. From then on, my mother repeated this exploit as if it were an achievement. “She got 97% in her Unit Tests. And you know, she fell off the top berth and didn’t even wake up,” my Mom would say, flexing her muscles in a way that would give the Phogat sisters a run for their medals.

Sometimes the train stops, as mine does– at 9:15 on a dark night, in a field before Dharmapuri. After a few minutes, I walk to the door. There are a couple of men smoking cigarettes. It seems civilized to blow smoke-rings into the great wide open. In contrast, smoking booths in airports look like cages in a zoo. The smokers inside speak on the phone as they hold their lights, as if the phone conversation makes them look and feel less alone. Here, the two men speak desultorily about why the train has stopped. Something about “shunting,” and an inter-city train crossing ours.

Inky blackness envelops the sky. No homes; no lights save for those from the train, and no dwellings. I climb down the steps—the only woman amidst a few men. My family would have had a fit if they saw me alone in the middle of nowhere, with darkness all around, waiting outside a train with a couple of strangers sharing a fag; beside a train that could take off any minute. The thought is thrilling. The light turns green. We all climb back as the train pulls away. There is something about a running train (or bus) that makes climbing in an adventure. Perhaps it is matching your body to a moving object; Newton’s law of physics and what not.

The train picks up speed. The toddler in the next compartment is fussing. She walks down the corridor, anklets jingling, followed by a smiling, adoring Dad.

We make clicking sympathetic voices. “The only thing that works is Waterbury’s Compound,” he says. He pulls out a tiny Johnny Walker bottle, opens the cap and pours the fluid down his toddler’s mouth. Nobody blinks. Instead, we fan ourselves with Maalai Murasu, Dinamalar, and Kalki, Tamil publications all.

At the next station, the gruff pharmaceutical executive who shares my compartment meets his family. They stand away from the crowd milling at the entrance of the compartment and catch up. I know what they are talking about because I have done this so many times with relatives while growing up. Some uncle or aunt would take the time to bring us food at random stations and we would have a few minutes of conversation. But what can you talk about really amidst the tension of a train that could leave any minute? Mostly you ask questions without waiting for answers? “How is Farida/Charles/Baby aunty? How is your health? Did Ahmed/Unni/Fatty write his exams? When are you coming to Delhi?” Connection through questions, as a way of saying thanks. Indians of yore didn’t say thanks. They viewed it as an insult almost. “You can put your thanks in a parcel and send it to Honolulu,” my Mami used to say loudly when we sputtered thanks, thanks to a convent school education. It was easy to imagine a line of thanks winging their way through the oceans to sunny Honolulu. It is these vignettes of life that make travelling on Indian trains a memorable experience. Minister Sadananda Gowda should capitalize on this collective affection that Indians have for train travel by making some improvements: cleaner toilets and stations that reflect and sell local food specialties would be a start. But first, he has to sort out the mess at home.