My editor from British Airways magazine emailed with this commission.

We’re after a piece on how different regions/cities in the country celebrate Diwali with food – this could be anything from street food in a big city like Delhi or Bombay to regions that might be influenced by other cultures (e.g French influence in Pondicherry).

The tone should speak very much to a local audience as opposed to someone, say, living in the UK.”

This is for The Club, a British Airways magazine.

What shocked me was how little I knew about foods in other regions. Not the broad “Bengalis love fish” type thing but details. Phone calls to friends/chefs, etc. The result is here. And below.

No matter where you are in India, food is as important when celebrating Diwali (23 October) as family and fireworks, says author Shoba Narayan – who grew up in Chennai. Here she shares the traditional sweets and treats you can expect to encounter if you’re travelling during this year’s festival of lights

Whether you call it Deepavali (the Sanskrit word meaning array of lights), Thee Vazhi or the anglicised Diwali, feasting will always be as central to the celebrations as being with family, and each region has its own traditions.

One thing people in Chennai wake up to on Deepavali morning is a dark brown, pungent, bitter concoction called marundhu – which means medicine in Tamil. It is popped into children’s mouths to prepare their tummies for the feasting. Made with dried ginger, black pepper, coriander seeds, jaggery (unrefined sugar) and local herbs, this is something Tamilians from India will cart with them all over the world. Here are some other traditions you may not know about:

Meat-loving Punjabis go vegetarian on the day to propitiate the goddess of wealth, Lakshmi. A vast thali (pictured) is prepared with a dose of adrak ka achaar, or pickled ginger, to settle the stomach. Dried fruits and nuts are mixed into everything, including besan ladoos (chickpea flour ladoos) and gujiyas, a boat-shaped flour pastry stuffed with sweet cream or khoya (dried whole milk, similar to ricotta). 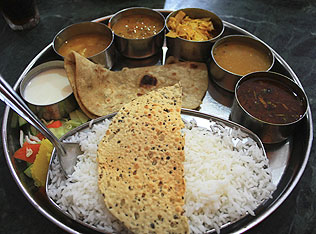 Maharashtrians and Gujaratis in Mumbai alternate savoury fried chivda (pictured) – a mixture of poha or beaten rice and nuts, spiked with chilli powder, turmeric and salt – with sweets. They also make chakli – rice and urad dal flour rolled into spirals and deep-fried. After traditional prayers, important to trading communities, sweets such as the boat-shaped karanji (filled with coconut and nuts) are shared. 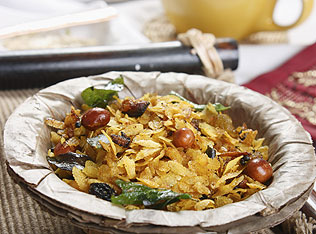 Royal Rajasthan makes suryakala and chandrakala (pictured), sweets shaped like the sun and the waning moon, both made with the no-fail recipe of sugar, butter and flour, with nuts as decoration. 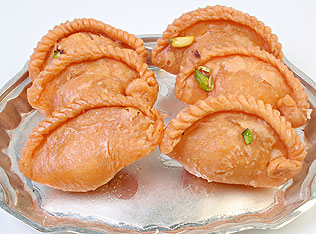 Though the state is primarily Christian, Diwali is still celebrated. Feasting begins with bitter melon to give perspective to life, followed by five kinds of poha (flattened rice) dishes made with coconut, lemon, yogurt, sweet milk and jaggery – all served with spicy white bean usal and vegetables. 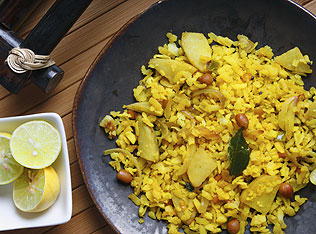 Although the Bengali Durga Puja and Kali Puja festivals are more popular in food-crazy Kolkata the night before Deepavali, they don’t skimp on the feasting: treats include dishes of mutton and ghee rice, the milky sweet sandesh (pictured), and nadu, a sweet ladoo made with coconut. 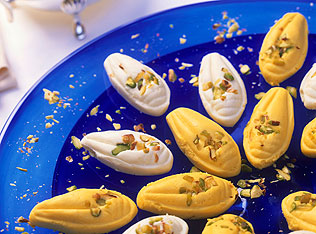 In Bangalore, the holige reigns supreme. The buttery flour is rolled out and filled with sweet dal or coconut then patted into a flatbread on a griddle. It’s usually served with ghee and hot milk. 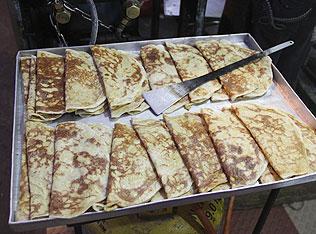