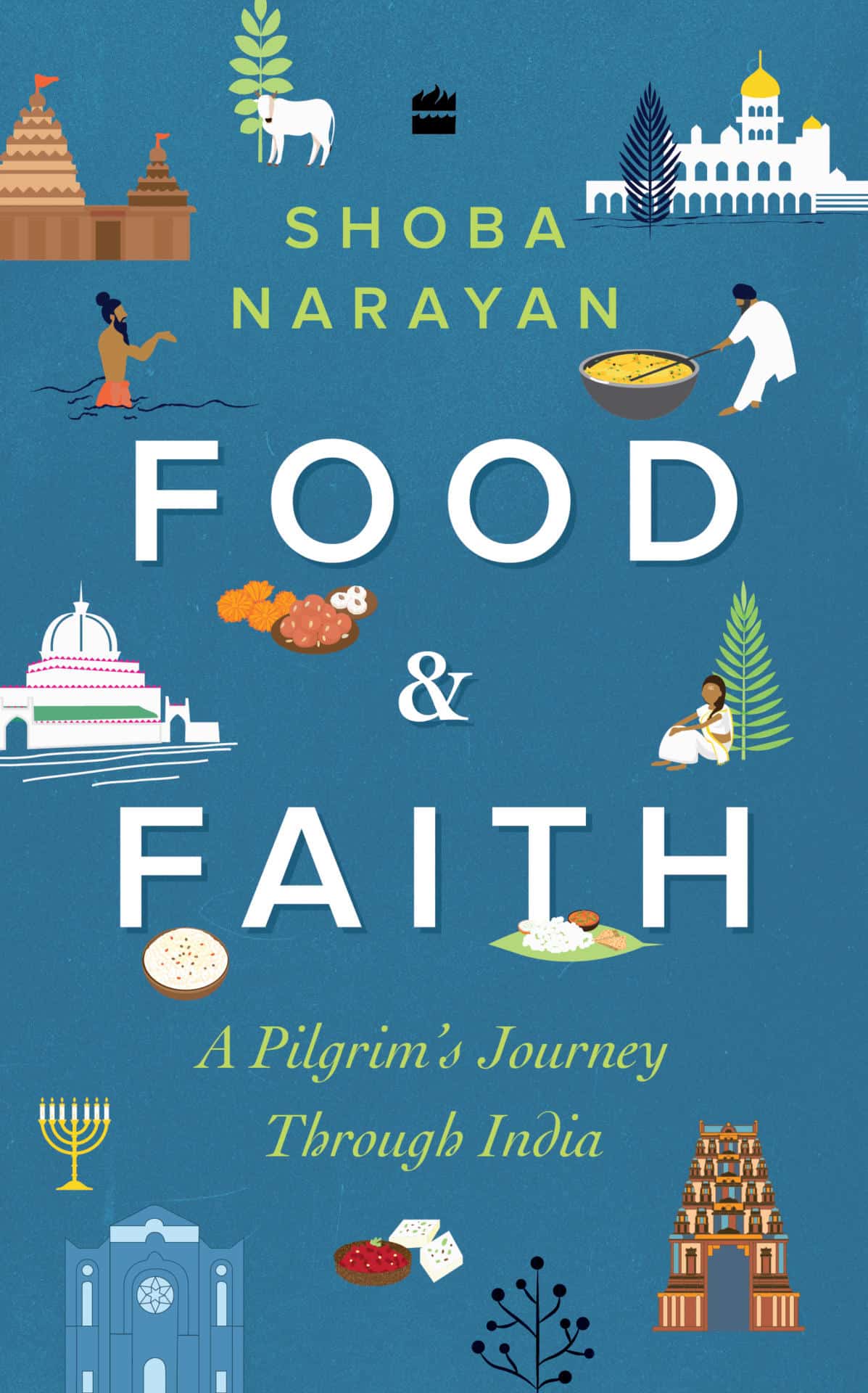 Food and Faith by Shoba Narayan deep dives into this subject

In India, you can’t separate food from faith. If the 29 diverse varieties of Indian cuisines, each coming from one state in the country, are not enough, we also have recipes that the temples and shrines in India dole out. Food and Faith, a new food book by writer Shoba Narayan spotlights many of them. We chat with the author to highlight a few of her and our favourite stories from the book.

My first brush with a holy Jewish spread was a Yom Kipur meal featured in Marvelous Mrs Maisel. Narayan’s book showcases the thriving Jewish community food culture in Mumbai that very little is known about. She says, “During Rosh Hashanah, each dish on their table has a meaning. Like a bowl of ruby red pomegranate signifying bounty, apples dipped in honey for sweetness, leafy vegetables are called karsi in Hebrew which sounds like the word ‘karet’ which means to cut off. Similarly, the beets are called silka in Hebrew, which sounds like ‘siluk’, meaning removal.” Her personal favourite from this spread remains the halva made of rice flour, all-purpose flour and sugar cooked with coconut milk and a pinch of salt. This is important because most Bene Israeli families who live in Mumbai, used to hire a man a few days before Rosh Hashanah, just to sit and stir a cauldron of halva for hours at a stretch.

A sweet dish mixed with meat in Ajmer

“In Ajmer, a dish that is sacred for the main shrine is the kesariabhat. It is orange in colour and follows the usual recipe of broken wheat, sugar, ghee, and dried fruit, all stirred together for hours,” she says. There is an urban legend that kesariabhat, during Shah Jahan’s reign was mixed with the meat of a nilgai. And it was Emperor Akbar who first ordered a giant cauldron to be kept inside the dargah called badi degh, “he also pledged to come to Ajmer on foot, from Delhi, if he won the battle of Chittorgarh and kept his promise and distributed food from the big cauldron when they came back victorious.”

Eating dhosai in a temple in South India

The word prasadam literally means mercy or blessing, and prasadam is the central point of conversation when it comes to South India and its temple cuisine. At a temple in Alagar Koyil in Madurai, prasadam is a spread of all things I’d first order at any nuanced South Indian restaurant. Especially like me, if you live in a metro city and your access to real food from Tamil Nadu or Kerala are hole in the wall places run by migrant chefs. “There is lemon rice that is bright yellow in colour and speckled with black mustard seeds and tamarind rice. There is also a helping of pongal flavored with jaggery, cashew nuts, cardamom and tons of ghee,” says Narayan. “Most popular is the dhosai, which is also the correct way to pronounce what North Indians crudely call ‘dosa’,” Narayan adds. A commonality in temple cuisine is that all ingredients are native to India, and some are unique too, like the whole black urad dal or vigna mungo, an ancient bean that is highly prized in India and Pakistan for its nutritive properties.

The kitchen in Kashi

Narayan has an apt way to describe Kashi. “It’s the land of Kashinath or Shiva and from an Indian philosophy point of view, Kashi is to India what Florence was to Renaissance artists and what Paris was to the Impressionist painters, an intellectual hub where ideas could cross pollinate,” she says. Her favourite food story is the one when Shiva pronounced that the whole world was maya, an illusion, “Is that so?” asked his wife. As Shakti, she was the material half of the world. Stung by her husband’s dismissal of her role in creation, she vanished. The world came to a standstill. Seeing this, the compassionate goddess, Shakti, appeared in Kashi as the goddess Annapurna. She set up a kitchen and began feeding the world again. Her husband, Shiva, did something that all men ought to do when they are proved wrong in a spousal quarrel. He showed up at his wife’s door and made nice.”

One of the most celebrated temple meat and experiences in India is undoubtedly at Harmandir Sahib, popularly known as the Golden Temple. “The clattering of thousands of plates, cups and other stainless steel vessels being washed in the dishwashing area, people sitting in circles chopping garlic, slicing onions, peeling carrots and potatoes, pulling off cauliflower florets from its stems, an entire section devoted to roti making,” these are Narayan’s favourite sights. Her observation about the food culture in this temple includes the humility displayed by the assembly line of volunteers who serve food and also collect discarded plates. “A paradoxical hallmark of this warrior-faith that emphasises on standing tall in the face of obstacles,” she says. Like yin and yang, there is an underlying principle of the words miri and piri, twin actions that are represented in the intertwined swords that is a classic Sikh symbolism. “The word ‘miri’ comes from the Persian word ‘amir’ and represents royalty, wealth, nobility, and kingship. The word ‘pir’ refers to a sufi holy man,” she says. The temple service in Amritsaris a coming together of these two words.

The meal at Puri

No outsider is allowed inside the Jagannath temple kitchen except the 1000 male cooks who make 56 different kinds of offerings called the chappan bhog, that is served to the Gods, six times a day. “The belief is that the Lord, and his people like variety,” shares Narayan. The sweet dishes alone are over fifty types including several types of laddu, malpua, kheer and rasagullas. With it there is a range of boiled rice dishes, lentil-based dals, vegetable curries and their permutations and combinations. “Food is central to worship in this temple because, you see, Lord Vishnu dines here,” she says.

Food and Faith: A Pilgrim’s Journey through India by Sobha Narayan is published by HarperCollins India and is out now