Why are hospital billing systems so bad?

Why are hospital billing systems so bad?

Is hospital billing bad all over India or is it just Bangalore?

Bangalore Talkies: Where I rant about hospital administration

My aunt suffered a fall and had to be hospitalized.  Hairline fracture on her wrist.  The orthopedist said that she needed surgery.  So here we are at Fortis hospital at 7 a.m.

Most of us enter hospitals with pain and shame, rage and frustration.  In India, we blame the victim.  Visiting relatives walk in and say, “Arrey, why did you fall?” As if it was done on purpose.  “In the future, tell yourself that you will not slip,” they advise.

When enough relatives blame you for your mishap, you start questioning: why me? Why did this happen now? There are no answers, and so we are sad, mad and worried.  We enter the hospital with our vulnerabilities exposed.  We leave the hospital beaten down, resigned and oddly grateful that we are alive and discharged.

Hospitals, like law enforcement and most government offices are dysfunctional, yet functioning organizations.  Over the last few years, thanks to elders, I have been inside many hospitals.  There are many difficult moments while being a patient, which is why it makes sense for hospitals to figure out how to make the incoming and outgoing experience for patients pleasant.  But they haven’t.  The admission and billing systems for most hospitals are terrible. Which sucks because, as a patient, you feel the sting of helplessness anyway.

By the time my aunt was wheeled upstairs for surgery, it was 9 am.  The nurses asked her to remove all her jewellery and she hesitated.  For women of my mother’s generation, removing their jewellery is a disrobement, an act that is imbued with many cultural and familial memories.  Whether it is the mangala-sutra or the earrings, or even the red and green glass bangles, these are given up when you become a widow.  In the end, they had to put plaster around some of my aunt’s toe-rings because they simply wouldn’t come out.

One nice thing about Indian doctors is that they chit-chat.  They take stock of the patient beyond her illness.  This was the case with the anaesthetist and the orthopedic surgeon.  We learned that the surgeon’s 94-year-old grandmother in Chikmagalur had fallen down and broken her hip but the family didn’t want her to have surgery.

“Even though you, her grandson, are an orthopedic surgeon?” we asked.

“Well, I am going to drive down there and bring her here for surgery,” he replied.  “There is no other way.”

All went well until discharge time.  Which was to be 4 PM. By then, my aunt was hungry and exhausted.  She hadn’t eaten the whole day.  The nurse’s station told us that until I went down and paid the bill, they couldn’t release her.  Fair enough.  I went down and the billing said that the OT (Operation Theatre) hadn’t released the bill because some of the pins and wires that they had used for the surgery had not been included in bill.  So I went back to the nurse’s station and told them to call the OT to find out why.  They cleared it.  I went back to billing and was told that the purchase department that procured the orthopedic pins still hadn’t signed off on them.  In case some special pins were used, they needed to check the cost with the supplier.  The same with the pharmacy.  Which brings me to the crux of this article.

In a city that prides itself on using technology to ease business, why are hospital billing systems so archaic and the opposite of user-friendly? I don’t know what system Fortis uses but I have seen the same scrambling happen in Manipal, Apollo, Vikram and other Bangalore hospitals as well.  I don’t think it is the fault of any particular individual.  In our situation, if the cost of the specialized pins that were used in the surgery had been included in the bill right in the beginning when they were used in the surgery, it would have saved us three hours.  But since each department in a hospital is busy all the time, since they don’t really “talk” to each other, lots of things fall through the cracks.  It is only when patients demand to be discharged and you are standing in the billing department begging to pay the bill so that you can take your patient home that they begin to collect the data about the patient.  Why can’t this be automated?

Recently, a neighbour of mine lost her husband at the hospital. Again, it was the same sorry story. She waited in line at Manipal Hospital, a grief-stricken widow, to pay the bills to take her spouse’s body home. Hospitals use phrases like “patient care” as a marketing tool. Yet, when the time comes, they fail us. Automating hospital billing systems is the only way to improve the patient experience. It isn’t rocket science. Why aren’t hospitals doing it? 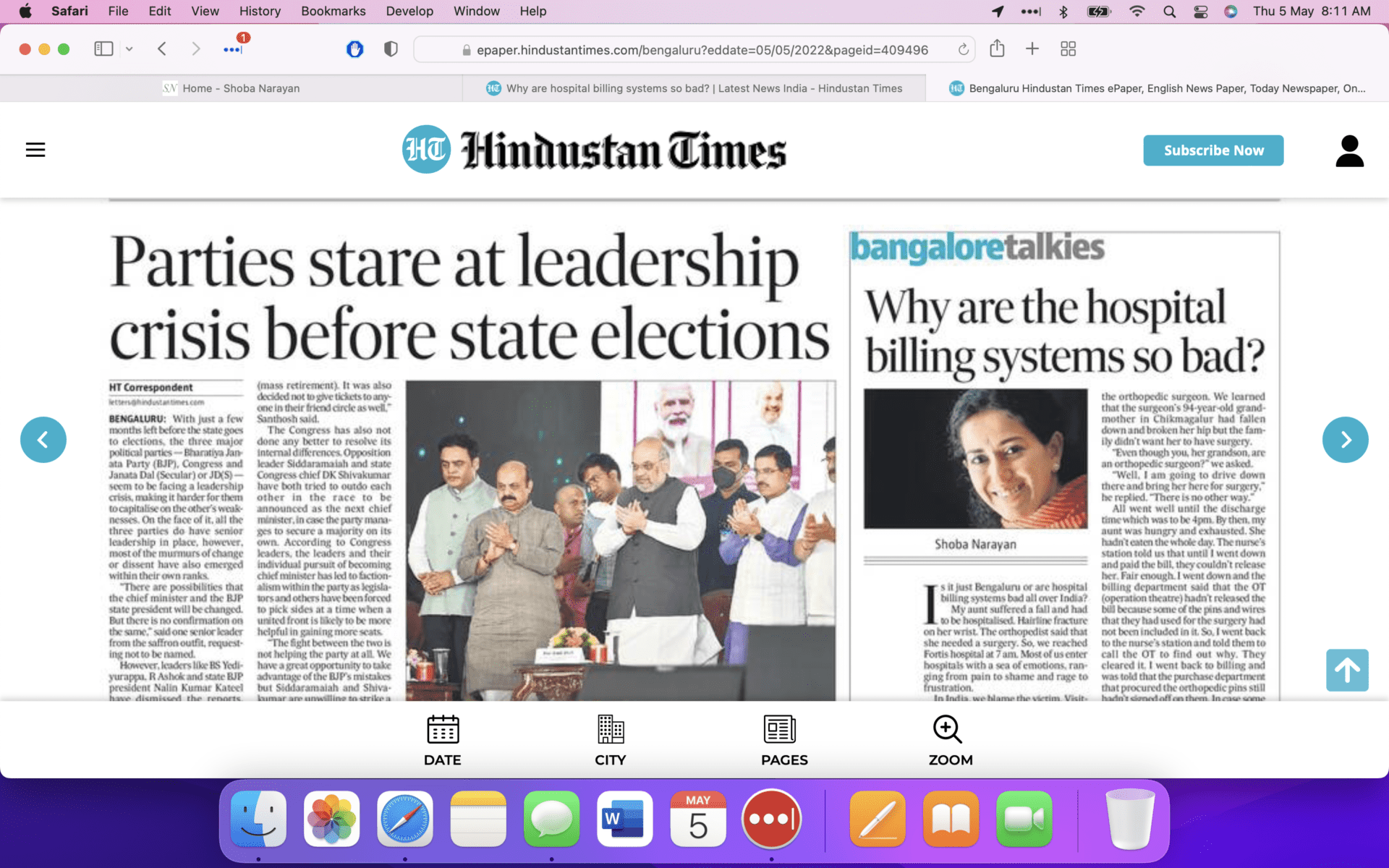