Thank you, Sriram, for the phrases.  I wonder who the people in the photo are.

Around India, you find duplication of words, from mada-mada in Tamil to balle-balle in Punjabi, as a national trait
Shoba Narayan 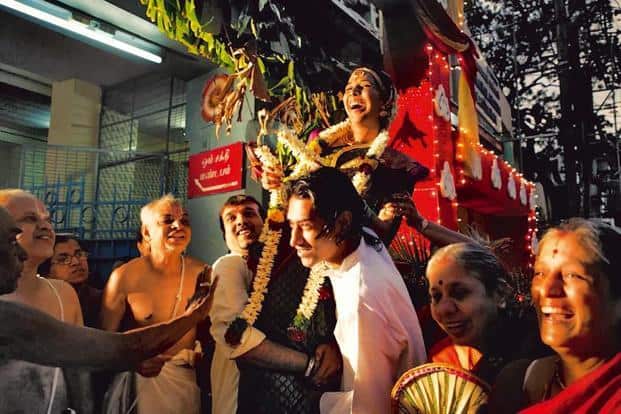 Recently, at a family wedding in Madurai, I listened to a rather mind-bending conversation. It occurred to me that it was a fairly typical conversation in all Tamilian weddings. Let me just recount it for you and then explain context.
Here is a typical scene at a Tamil wedding. Everyone is extremely busy, acting extremely busy. This intensifies as it gets closer to themuhurtam (auspicious) time. Harried ladies, clad in red nine-yard saris, bustle around carrying trays of turmeric, coconuts, fruits and flowers, which in the past had auspicious meaning and purpose but are now unceremoniously wrapped in newspapers by priests and parcelled into jute takeaway bags. Sweating men in dhotis stand at the edge of the stage and yell out commands. The priests shout louder than these men; and the nadaswaram and thavil combination that is usually commandeered for these functions plays loudest of all.
The music successfully drowns out all conversation, but that doesn’t stop some in the audience from trying to converse with each other. Smoke fills the room. An intense smell of incense, rose and jasmine mixed with mosquito coil and body odour permeates the air. Tempers flare and a typical scene plays out. You have to imagine the conversation below in Tamil.
“Don’t stand around masa-masa (dithering),” an uncle will yell at his daughter. “Come mada-mada (fast-fast) and do some work.”
“Why are you noy-noy annoying me?” the girl will retort.
“My daughter is wasting her life,” the girl’s mother will tell a bystander. Tamilians are not known for their diplomacy. “She is fat and all she does is talk loda-loda loudly to people.”
“Don’t worry. You conduct her marriage jaam-jaam (triumphantly), and all your problems will be solved,” the bystander will reply.
“Oh, don’t talk about my daughter’s marriage. My heart is racing pada-pada already,” the mother will say.
“Why do you worry? Go drink some chuda-chuda (hot-hot) coffee and everything will be all right,” the bystander will reply.
“Besh-besh (well, well). Easy for you to say.”
The thing about this is the number of words that are repetitive. Linguists call this reduplication, and apparently this is a typical feature of Indian language, along with echoing and onomatopoeia. Tamil, Telugu, Kannada, and Bengali are full of examples of reduplication, while certain other Indian languages—Hindi, for example—don’t have too many such words.
One list I found had the following Bengali words as examples of reduplication: phit-phat, phata-phati,ghup-ghap,gajar-majar, chit-chat, thik-thak, mit-mat, tapur-tupur, ulat-palat, tuki-taki, tok-tok, thok-thok, tek-tek, to-to, tol-tol, tol-mol, tosh-tosh, tay-tay, tog-bog, khit-khit, bokor-bokor, bhon-bhon, min-min, thor-thor, thom-thome, jhok-jhok, paen-paen, thol-thol, thom-thom, miti-miti, chepe-chupe, phosti-nasti, toch-noch, tal-matal, chat-pat, kata-kuti, chal-chal, cip-cip, abol-tabol, bhethor-shethor, cholte-cholte, aste-aste, dhire-dhire, bhalo-bhalo, sada-sada, chhoto-chhoto, cha-ta, pan-tan, kaj-taj, pani-tani. And the list goes on and on… cholche-cholbe….
Some expressions like the Tamilian ada-da, and besh-besh are just exclamations that change meaning depending on the tone of voice. Like the English term, “well well”, can be an expression of admiration, regret, wonder or sarcasm.
Indians will rarely say “tiny” in the singular. In the film Monsoon Wedding, there is a dialogue that compares a woman’s body part to mangoes and the speaker uses the term “choti-choti aam” (tiny-tiny mangoes). Similarly, a popular Tamil song begins with the phrase, “Chinna Chinna Asai”, meaning, tiny- tiny desires.
Hindi doesn’t have too many examples of reduplication, based on the research I’ve done. Sadly, I don’t know the language well enough to speak about it on my own authority. As far as I can tell, Hindi words exhibit “echoing” characteristics, which is not a straight repetition but a version, such as idhar-udhar,chai-shai, khaana-vaana and shaadi-vaadi. One clear reduplication is the Punjabi balle-balle, which was recorded in a recent newspaper story about Indian Idol season 6 finalist Davinder Pal Singh. Apparently, for Pal’s birthday, his fans shouted, “Davinder dee balle balle bakee sare thalle thalle.” Their words didn’t come true. Pal lost.
So why do we Indians use reduplication? There is a wonderful open source journal called Language in India that discusses these and other Indian linguistic quirks. The August 2009 issue has a paper titled A Study of Structural Reduplication in Tamil And Telugu, by A. Parimalagantham—what a wonderful name; it means “fragrance magnetism” in Sanskrit. The paper states, as does Wikipedia, for that matter, “Reduplication is used both in inflection to convey grammatical function such as plurality, intensification etc. and in lexical derivation to create new words.”
My own rationale is that we Indians use reduplication to convey casualness. Witness how this tendency to reduplicate has crossed over to English—or should I say, English-Vinglish.
Shoba Narayan will watch the DVD of English Vinglish, if only to see how far Sridevi has come from her days as the heroine of 16 Vayadinile. Write to her at [email protected]
Also Read | Shoba’s previous Lounge columns