A primer to Chennai’s music and dance festival
Shoba Narayan 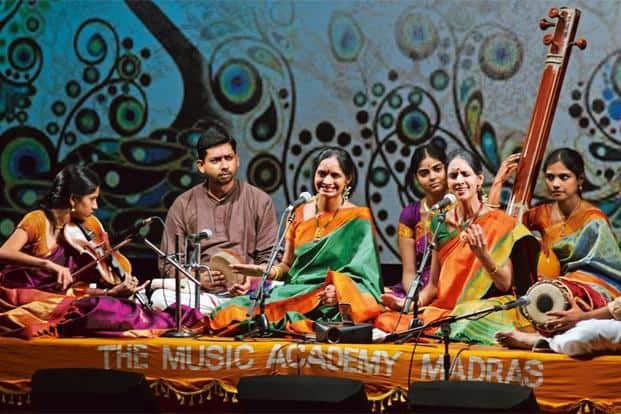 Ranjani and Gayathri perform with Charumathi Raghuraman
This is the time of year when my Klout score drastically increases. Thanks simply to the fact that I grew up in Chennai and am interested in music and dance, my popularity reaches an all-time high, with friends, acquaintances and even cordial enemies from across the globe asking about Chennai’s December season. It is also the one time of year when I don’t have to answer uncomfortable questions about Chennai’s weather. Yes, it is “sultry” as the locals say; but there is the sea breeze to cool things down.
This is a primer to Chennai’s music and dance festival; a personal answer to questions about what to see, do and hear in Chennai during the season. Basics and semantics first. The word kutcheri means music concert. In Chennai, this mostly means Carnatic music, which began with Purandara Dasa, a 15th century composer, musicologist and scholar who codified Carnatic music into a system that continues to this day.
Purandara Dasa, who lived in Karnataka and composed many “Dasar-namas” as they are called in Kannada, is called the “Sangeeta Pitamaha” or grandfather of Carnatic music. More popular are the “divine trinity” of composers who came after him. They are Thyagaraja, Muthuswamy Dikshithar and Syama Shastry, each of whom has a distinct musical signature. Even if you know nothing about the song, you can recognize the composer in the last couple of lines. Shyama Shastry ended with “Shyama”, Dikshithar ended with “guru guha”, and Thyagaraja with “Thyagaraja”. Another king-composer, Swathi Thirunal, who belonged to the same Travancore royal family as the artist Raja Ravi Verma, ended his compositions with “Padmanabha”, in a nod to the jewel-rich temple in Thiruvananthapuram.
The beauty of Chennai’s December season is its authenticity. It hasn’t changed much in close to 50 years. There are concerts throughout the year in Chennai. Only recently though have NRIs started flying into town during Christmas, establishing a cottage industry of retirees who take in known paying guests who can’t find an affordable hotel during this time. To the brass tacks.
When to go
The peak season is from 15 December-15 January. However, there are some sabhas where the concerts start as early as 1 November. Essentially, Chennai becomes a treasure trove of music all through November, December, and January.
The dance festival typically starts after 1 January. Go to Artindia.net for details and schedules. Concert schedules can be found at Chennai December Season (www.chennaidecemberseason.com ), which provides links to individual sabhas. There is also a frequently updated Facebook page of the same name.
Where to go
The Music Academy, or “Academy” as the locals call it, is Ground Zero. Perhaps because of its prestige, it has also become something of a circus; the place to see and be seen.
Other sabhas may offer a more authentic experience without the tamasha (spectacle). For example, the Narada Gana Sabha or Thyaga Brahma Gana Sabha, informally called Vani Mahal, are centrally located and attract the connoisseurs of Carnatic music. There are hoary old sabhas such as the Mylapore Fine Arts Club or Rasika Ranjani Sabha (RR Sabha) where the chairs are rickety but the audience strong in its knowledge of music. Newer venues like Hamsadhwani in Indira Nagar, where I grew up, attract good musicians and a younger crowd. Some central venues like the Rani Seethai hall and Kamarajar Arangam, where the “Chennaiyil Thiruvaiyaru” festival will be held, have gained strength in terms of their offerings.
Where to stay
In terms of location, the old Chola Sheraton, now called My Fortune, on Cathedral Road, is walking distance from the Music Academy. Hotel Maris and Hotel Savera are also close by. Another chic choice is The Park, Chennai, which is down the road and within walking distance if the moon is shining and the weather, cool. Chennai has some great new hotels such as the Hyatt Regency, ITC Grand Chola, Park Hyatt and The Leela, but these are not close to the performance venues.
Specific dates
If you want to see both music and dance, fly into Chennai on 27 December. You will get three days of music. For a break, visit the Ramana Ashram in Thiruvannamalai, where you can stay at the Sparsa resort. Or drive 3 hours to Puducherry for an Indo-French experience at any of the number of boutique hotels there. I’ve stayed at The Promenade, Le Dupleix, Maison Perumal, The Dune, L’Escale, and De l’Orient and can recommend them. Stay a couple of days outside Chennai and get back into the city on 2 January for the dance performances.
Which artist?
These are my favourites. The sweet-voiced sisters, Ranjani-Gayathri; the diva, Sudha Ragunathan; the singer who has a phenomenal musical pedigree, Nithyashree Mahadevan; ditto for Abhishek Raghuram; the maverick T.M. Krishna; the classicists Sanjay Subrahmanyan and Vijay Siva; Aruna Sairam who, popularized abhangs; Bombay Jayashri, nominated for an Oscar.
Who am I leaving out? This year it may be time to patronize rising stars such as Nisha Rajagopal, Amritha Murali, Pantula Rama, Sikkil Gurucharan, Sreevalsan Menon and Gayathri Veeraraghavan.
Rest assured that no matter who it is, they will be good. They have to—in order to reach this level. While Chennai music connoisseurs mark their years by the nagomomu that Balamurali Krishna sang at the Narada Gana Sabha in 1972 as compared to that young firebrand, T.N.Seshagopalan, who sings it too fast for the abheri to flower, the company of these musicians—for you and I—will be enough.

Shoba Narayan is paying attention to Ramakrishnan Murthy from California, viewed by her connoisseur friends as a promising talent in Carnatic music.