The best chargers are those that you don’t have to think about. By which I mean that they ought to juice up quickly, hold their charge till that emergency moment when you need backup.

The best chargers are also those that multi-task. By which I mean that you can charge multiple devices without fuss. Given the number of devices that a typical person has, this means the ability to charge devices large and small– from laptop to– er, I am tempted to say lap-dog, but I really mean smartphone.

The good news is that chargers are widely available in the market. The bad news is that most of them stink. They are a favoured corporate gift item. One that I received recently dropped its charge at the exact moment when I needed it. What is the point of being tense if your charger will hold its juice? Chargers by their very nature ought to be stress busters not stress-starters.

The fantasy (or nightmare depending on your point of view) is that you can simply wave your device in the air and it will start charging itself– that the air itself becomes so technologically advanced that it contains particles meant to charge those devices that we today view as imperitive as oxygen itself. But until such time, we need portable chargers.

The reality depends on what you make of it. You can spend a couple of bucks on a charger that may or may not die at crucial moments. Or you can view a charger as a long-term investments that simply stays in your travel case for every trip.

My Charge makes only chargers which is a plus. They hold their charge for up to a year, which means that you don’t have to remember to charge them before every trip. The products are also featured on the notoriously hard-to-get “Amazon’s Choice” list of merchants, which is a title given to “highly rated well-priced products available to ship immediately.”

On the negative side, there are chargers that are smaller (and cheaper) than these guys, albeit without as many bells and whistles, and you can make a case about whether you need a charger that charger multiple devices at the same time.

Are you going on a trip or an adventure? Depending on that you might want to choose one of the below.

Any good charger needs two things: an output (ideally more than one) and an input (ideally simply a wall plug) and a sleek design that doesn’t take too much space in your travel bag.

As the ultra-specific name implies, this is really like a power generator for battery operated devices. It was designed for campers, hunters and lone rangers who lived (or wanted to live) off the grid. But it could just as well apply in India for any of us who live in towns that suffer frequent power cuts. Charge up this battery and you can run a LED television, and of course your laptops, smartphones and smart-pads. The good news is that all of these can be powered at the same time through a nifty combination of plugs into which you can feed USB and other wires.

Now, for the specifications. The device comes with a 13400mAh Lithium Ion, which for those in the know, is equivalent to playing an LED television for three hours. So you could watch a long Bollywood movie, or reruns of all those old television serials that you have stacked up. It has an AC power output for the pre-bluetooth generation who actually intersect with power outlets– and for those who want to run a compatible electric fan or electric light off of this battery. There are three USB ports: enough to charge all your devices and if you have more than three devices on the go, you need help. The power output is suitable for devices that require less than 45 watts. This means that all your old laptops that use, say 60 watts of power cannot be charged using this. Most newer models use a ridiculously low wattage: 29 watts for my Macbook Air. That said, this may not work for those Indian homes that have multiple generations using multiple generations of devices. 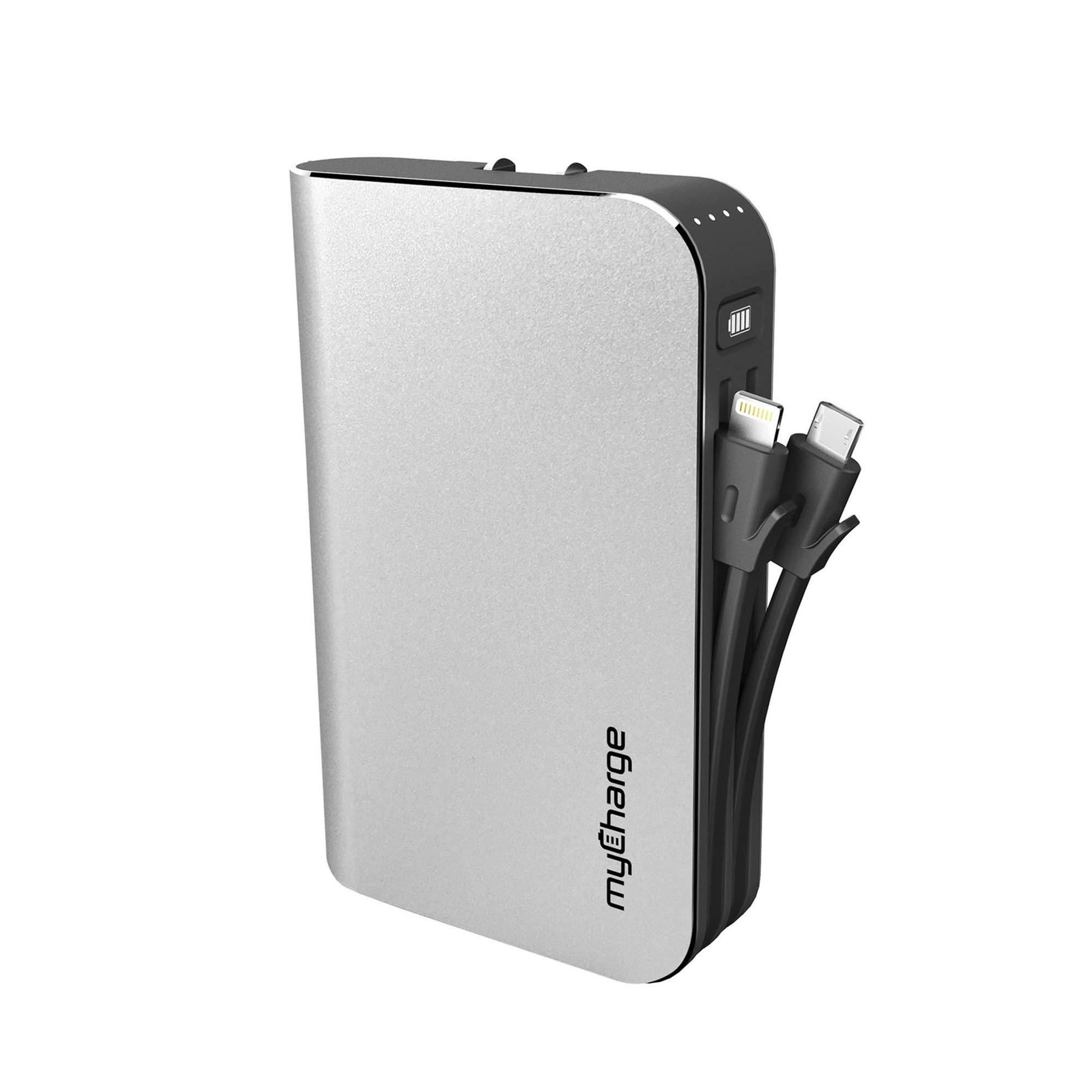 If you are not going off the grid and just need a charger for a day-trip to Delhi, you could do worse than carry the Hub Max. It is about the size of an iPhone 7 and sleek as a mermaid. No jutting cables, no ugly wires, all neatly tucked like like a starlet who walks out of her plastic surgeon. The Hub Max has two cables integrated into its design, which is the best part in my opinion. Take your phone and toss this battery into your overnight duffel bag and you are good to go.

The two cables included are an Apple Lightning cable and a regular micro-USB for other smart devices. If you have gaming devices with specialist jacks, this is not for them. Once this is juiced up, it retains its charge for up to one year, which is great for those who forget to plug in the device the night before travel. It takes about 120 minutes to charge an iPhone from zero to full charge and can do this about five times before the battery runs out. It weighs 1.19 pounds according to the company website and is a great device to carry with you when you travel next to that tiger safari or all-day board meeting.

All these chargers are available at My Charge as well as online retail stores.

It depends on who you are. If you trust specialists, then My Charge does, well, just chargers. They offer a range of choices depending on what type of charger you want. Size, length of charge, single or multiple devices, they have it covered. They are higher priced than your average Indian charger which is the negotiation that you need to engage in. Quality or price: that’s the question?